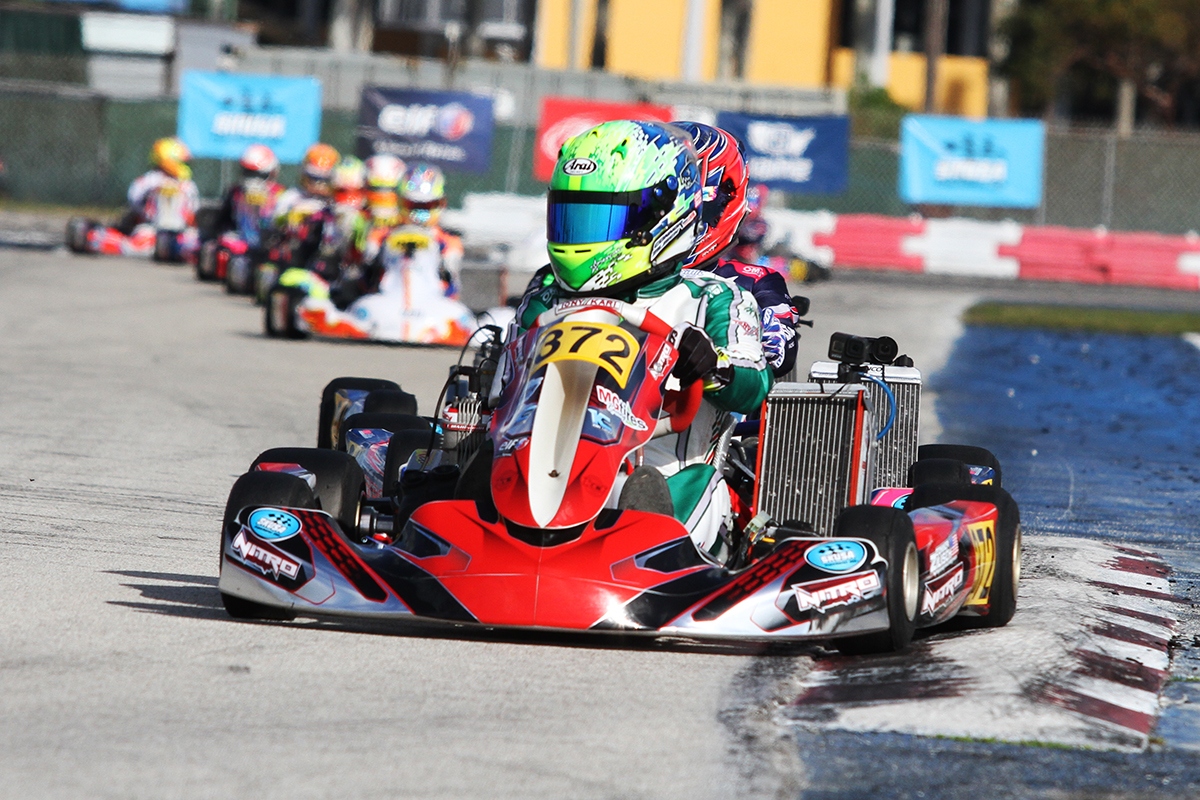 The final round of the Superkarts! USA Winter Series went into the books on Sunday at the AMR Homestead-Miami Motorplex presented by MG Tires. Nearly 180 entries took part in the fourth and final round of the ‘best of three’ championship program at the Homestead, Florida facility with sunny and warm conditions all day. Most of the championships were either locked or near clinched with the X30 Senior up for grabs. The final class in the order would not disappoint with several story lines coming out of the last race of the program for 2021.

The Rolison Performance Group X30 Senior category victory and championship went down to the wire. Two-time defending series champion Ryan Norberg (RPG / Kosmic) and two-time race winner Arias Deukmedjian (KSNA / Kart Republic) came into the final day separated by just two points. Neither were able to claim the 10 bonus points for setting fast time in qualifying with Diego Ramos (REM / Kosmic) posting a 47.157-lap. Hannah Greenenmeier (RPG / Kosmic) was P2 with Deukmedjian third and Norberg fifth. Greenemeier pulled off nine laps into the Prefinal with a rib injury. Out front, Norberg was able to advance his way to the point, taking the spot from Senior rookie Connor Zilisch (Nitro / Tony Kart). They would run 1-2 to the finish of the 12-lap race with Thomas Annunziata (MDR / Tony Kart) third and Deukmedjian fourth. As the final race of the day and the weekend, the intensity seemed to be increased as the green flag waved. Several changes for position took place until Norberg and Zilisch sat 1-2 with Annunziata trailing. Behind him, Deukmedjian was shuffled back to eight on the opening circuit, but found himself up to fourth the following circuit. Zilisch spent 10 laps on the bumper of Norberg until a door opened up on lap 17. Annunziata was able to strike the following corner, dropping Norberg to third before Deukmedjian took the third spot away the next circuit. Zilisch maintain enough of a gap to go unchallenged to the victory. Annunziata made it Senior rookies 1-2 with Deukmedjian beating Norberg for third, thus securing the provisional championship. Officials however penalized Deukmedjian, along with Ramos three seconds for ‘track limit/shortcut’ on the track. That promoted Norberg to the third step of the podium, and handed him the championship. Sebastian Montoya (Tony Kart) advanced up to fourth with Deukmedjian dropped to fifth and Ramos to sixth. 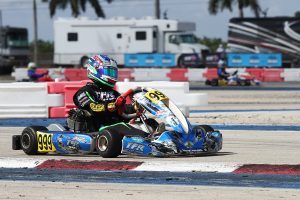 The Haase Karts KA100 Senior class saw a bit of drama as well, including a Senior rookie claiming the top spot of the podium. Arias Deukmedjian (KSNA / Kart Republic) appeared to carry over the momentum from Saturday’s victory and put in quick time for qualifying, driving away to the provisional victory in the Prefinal. Official however handed him a 10-second penalty for ‘manipulating the start’, thus taking the win away and dropping him to eighth in the results. That gave Nolan Allison (RPG / Kosmic) the victory with Round One winner Brandon Lemke (FMS / Merlin) on the front row. Deukmedjian starting eighth was in the ‘blender’, getting caught up in contact on lap two and beginning lap three more contact put him into the barriers on the exit of turn one. The race ended for Arias but the championship was locked up despite the results at the checkered flag. Allison jumped out to a solid lead early on, but was run down late in the race by Thomas Annunziata (MDR / Tony Kart). Once he took over the lead on lap 16, Annunziata drove away to his first series victory. Allison crossed the line for second but was handed a 10-second penalty for ‘manipulating the start’. That promoted to Senior rookie Aiden Levy (Tony Kart) to runner-up and Lemke to third on the podium. Allison fell to fifth with Connor Ferris (TFR / Kart Republic) in fourth. 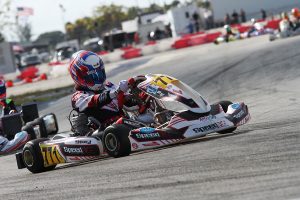 Four different drivers claimed the victories over the four rounds in the Speed Concepts Racing X30 Junior class. Paul Bocuse (SCR / Redspeed) redeemed his issues on Saturday, coming away with a strong performance Sunday to claim the victory. After qualifying fourth, Bocuse was able to edge out top qualifier and Round One winner Kai Sorensen (Parolin USA) for the Prefinal win. In the Final, Bocuse was able to go wire-to-wire in the 22-lap Final for victory. Sorensen trailed him the majority of the time, locking up the series championship in his Junior debut. Donovan Bonilla (Orsolon / Tony Kart) drove to his first podium in third. Noah Baker (Supertune / Tony Kart) advanced up to fourth with Round Two winner Jeremy Fletcher (Benik / EOS) up five spots to fifth. 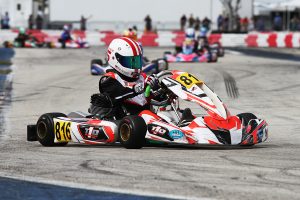 Things went down to the wire in the Piquet Sports KA100 Junior division. Saturday winner Collin Lloyd (Tony Kart) came back looking for a sweep on the final day, setting fast time in qualifying and winning the Prefinal. At the start of the Final, Christian Miles (SBR / Race Factory) jumped out to the lead until Lloyd reclaimed the spot on lap four. Miles would eventually get pushed back to third with point leader Chase Hand (RPG / Kosmic) moving the top challenger position. Lap by lap, Hand was able to close in and late in the race, reach Lloyd’s bumper. Quick to advance, Hand claimed the lead with just three laps remaining. From there, Hand drove off to reach the checkered flag first. A pushback bumper penalty of three seconds however took the victory away from Hand, dropping him to third on the podium and giving Lloyd the sweep. Miles was advanced up to second with Sebastian Wheldon (JC / Kosmic) fourth and Cole Kleck (Arcane / Tony Kart) fifth. 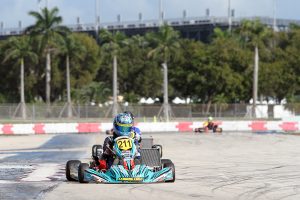 A series record 11-straight victories for Renato Jader David (Orsolon / Tony Kart) in the X30 Master class helped him to earn a third-straight championship. Renato swept the final round, leading every lap of the Prefinal and Final. William Isaias (IR / Tony Kart) was top challenger, keeping close in the opening circuits until falling back as the race progressed. Luiz Cordeiro (Piquet / Tony Kart) set fast lap of the race, working past Ariel Castro (AM / Tony Kart) late in the race for the final podium position as Michael Auriemma (Orsolon / Tony Kart) completed the top-five. 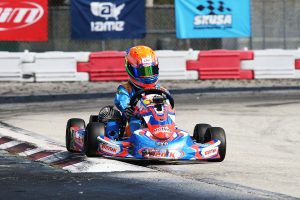 The championship was locked up Saturday in the Nitro Kart Mini Swift division by Matias Orjuela (Parolin USA). Orjuela sat out Sunday’s action, allowing for Enzo Vidmontiene (Benik) to claim his first victory. After setting fast time in qualifying, Vidmontiene drove to the provisional win in the Prefinal, only to be handed a 10-second penalty for ‘manipulating the start’. That dropped him down to seventh on the grid for the Prefinal, with Oliver Wheldon (JC / Kosmic) on the pole for the main event. A wild opening couple of laps to begin the Final saw Vidmontiene jump out to the lead and spread out the field. Enzo was able to lead 18 laps to secure his first series victory. Wheldon drove to a solid second with the fight for third going to the wire as Sebastian Garzon (Orsolon / Tony Kart) held off Jensen Burnett (Parolin USA) for the spot. Karsyn Walters (Supertune / Tony Kart) completed the top-five. 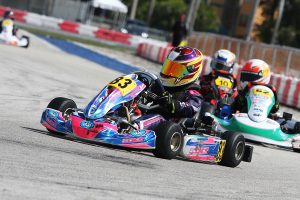 The win streak by Keelan Harvick (Nitro Kart) in the DNJ Intermodal Services Micro Swift class came to an end today, with the three-time winner claiming the series championship with a third victory on Saturday. Gianmatteo Rousseau (Nitro Kart) appeared to be the driver that would end that win streak, recording the fast lap in qualifying and winning the Prefinal. Harvick fought he and Augustus Toniolo (RPG / Kosmic) all 20 laps of the Final. Each wanted to lead, but in the end, Toniolo was able to secure the top spot and score his first series victory. Rousseau crossed the line in second but was handed a three-second penalty for blocking and another three-second penalty for impeding. That promoted Isaac Malcuit (AKT / Kart Republic) to second, after joining the fight late in the race. Harvick ended up third with Ethan Tovo (Nitro Kart) fourth and Alessandro Truchot (Parolin USA) fifth.

The Superkarts! USA returns to action on the March 26-28 as the SKUSA Pro Tour opens up the 2021 season at the NOLA Motorsports facility in New Orleans, Louisiana.