Deukmedjian doubles up again to open up series finale 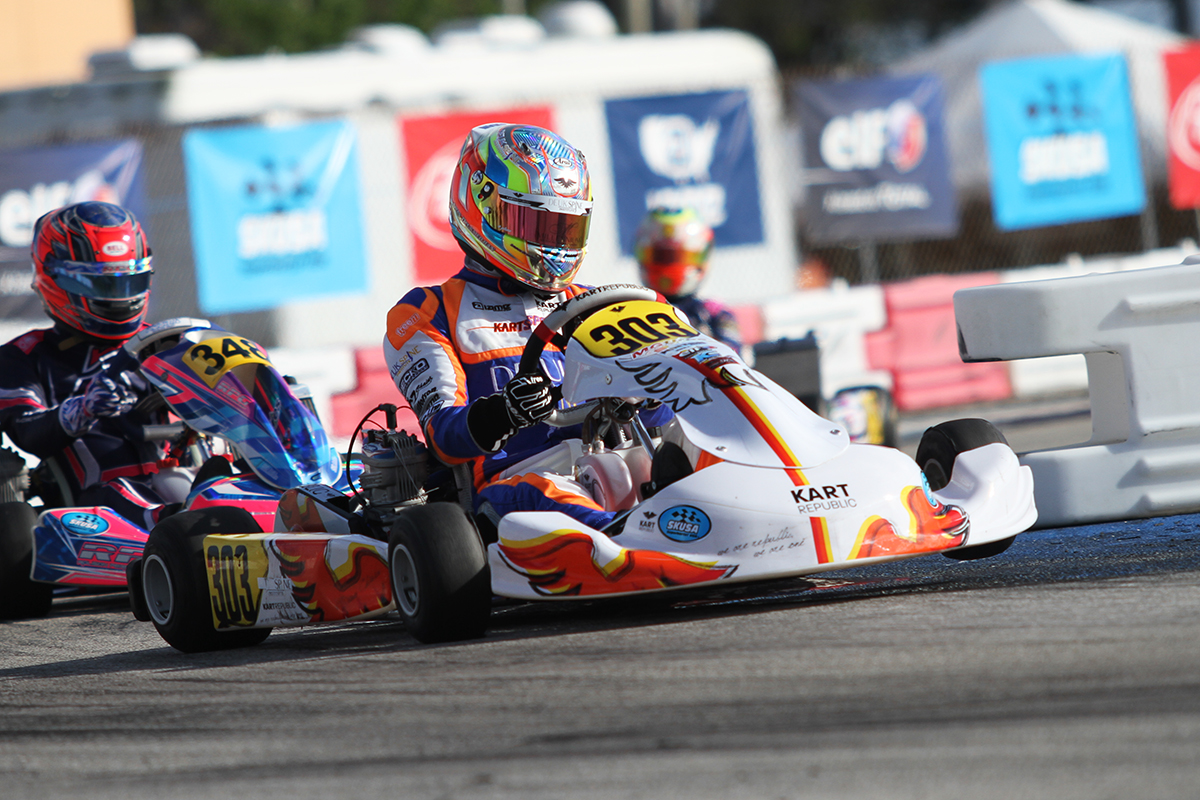 The 2021 Superkarts! USA Winter Series finale weekend is underway with Round Three of the racing action completed on Saturday, February 13 at the AMR Homestead-Miami Motorplex presented by MG Tires. Half of the winter championship was completed in January with the second half taking part this weekend in Homestead, Florida. For some, it was a chance to secure a position in the championship chase, for others it has been an opportunity to build for the upcoming summer season. Shinning on the day was KartSport North America / Kart Republic driver Arias Deukmedjian continuing on what he did in Round Two with a double victory today.

Deukmedjian’s first victory on the day came in the Haase Karts KA100 Senior division. Qualifying was the only blemish on his scorecard for the day, missing out on fast time by 17 thousandths with point leader Hannah Greenemeier (RPG / Kosmic) setting the quick lap. Deukmedjian took over the lead on lap 2 of the Prefinal and led to the red flag with two laps remaining. The main event was also cut short by five laps, but Arias led the entire distance until the red flag came out for an incident toward the tail end of the field. Deukmedjian was able to get away to a solid lead early as they battle for the second spot behind him. When the full course caution and red flag came out, Round One winner Brandon Lemke (FMS / Merlin) was in the runner-up spot ahead of Nolan Allison (RPG / Kosmic) and Greenemeier. Aiden Levy (Tony Kart) completed the top-five in the final results. 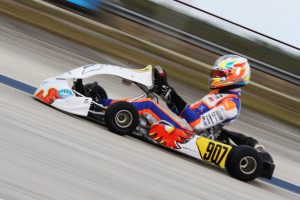 The second victory for Deukmedjian came in the Rolison Performance Group X30 Senior class. It looked to be shaping up to be the first victory for defending champion Ryan Norberg (RPG / Kosmic) since 2019. Norberg set fast time in qualifying and won the Prefinal by leading every lap. In the Final, he along with Deukmedjian and Diego Ramos (REM / Kosmic) broke away. Norberg led the opening nine laps of the 22-lap final before Deukmedjian took control. From there, Arias was able to pace the trio every circuit to claim his second victory in the category and second win on the day. Norber and Ramos completed the podium with Connor Zilisch (Nitro / Tony Kart) in fourth and Thomas Annunziata (MDR / Tony Kart) fifth. 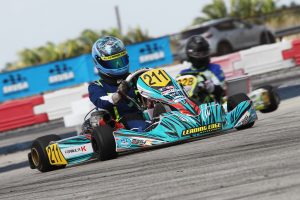 Brent Crews (LEM / Formula K) wrapped up his third straight victory in the PSL Karting Pro Shifter division to secure the provisional series championship. Crews swept the day from qualifying to the Final, leading Devon Smith-Harden (HMG / CompKart) throughout the day. The fight continued in Master Shifter between Scott ‘Skitchy’ Barnes (HMG / Intrepid) and Freddy Rhemrev (CRG). Rhemrev set fast time in qualifying while Barnes grabbed the holeshot to begin the Prefinal. In the end, Rhemrev was able to climb back to the lead at the end of the Prefinal. A spin and broken seat by Barnes limited his ability to challenge Rhemrev, scoring his second victory in the series with Barnes second and Ken Schilling (Aluminos) in third. 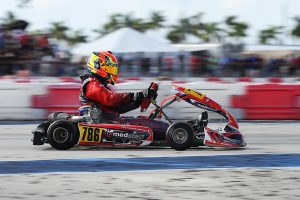 The Junior categories welcomed two new winners to each class. Leonardo Hassan (Tony Kart) set the tone in the Speed Concepts Racing X30 Junior class with a charge from fifth after qualifying to the win in the Prefinal. Hassan led the first half of the main event until both top qualifier Jakub Kolar (RS Kart) and Jeremy Fletcher (Benik / EOS) worked past. They were able to get away from Hassan until their fight for the lead with two laps remaining allowed Hassan to go from third to first in a few corners. That was the move for the victory as Hassan would hold on by 78 thousandths for the victory over Kolar with Fletcher in third. Championship leader Kai Sorensen (Parolin USA) suffered electrical issues in the Prefinal, forcing him to start from 22nd. Fast laps of the race and late race moves put him fourth at the checkered flag with Rowan Gill (MDR / Kosmic) in fifth. 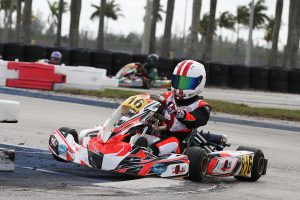 The Piquet Sports KA100 Junior class was up for grabs all day. Local driver Collin Lloyd (Tony Kart) set fast time in qualifying to begin the day while point leader Chase Hand (RPG / Kosmic) came away with the win in the Prefinal. Hand was able to lead the opening few laps until Lloyd took over the point. From there, Lloyd was able to pull away as they battle for second behind him. At the line Lloyd earned his first SKUSA Winter Series victory by over six seconds. Hand was able to beat out Sebastian Wheldon (JC / Kosmic) for the runner-up spot while Christian Miles (SBR / Race Factory) and Round One winner Luke Welcome (VM / Tony Kart) completing the top-five. 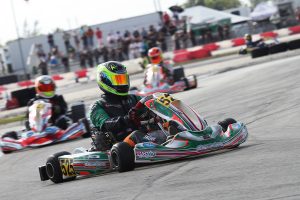 Renato Jader David (Orsolon / Tony Kart) was able to secure a tenth straight victory in the Orsolon Racing X30 Master class. Renato swept the day’s action, driving to a wire-to-wire victory in the Final for his 10th straight victory, dating back to the 2019 edition of the SKUSA Winter Series. The fight was for second on the day with Miguel Mier (Crosslink / Exprit) able to claim the position late in the race in his 2021 debut. William Isaias (IR / Tony Kart) settled for third with Luiz Cordeiro (Piquet / Tony Kart) fourth and Michael Auriemma (Orsolon / Tony Kart) fifth. 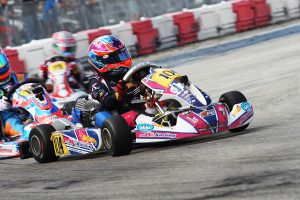 A first victory for Oliver Wheldon in the Mini Swift category (Photo: EKN)

A new winner came out of the Nitro Kart Mini Swift category on the day. Two-time winner Matias Orjuela (Parolin USA) set fast time in qualifying but was shuffled to the back of the field at the start of the Prefinal. Oliver Wheldon (JC / Kosmic) stepped up to score the win in the Prefinal, and was under attack in the Final. Enzo Vidmontiene (Benik) was the top challenger, until five laps to go when he retired. That put Wheldon back to the point, where he was able to hold on and drive to his first series victory. Luis Umana (Supertune / Tony Kart) was able to drive to second with Orjuela driving from ninth to third. A pushback bumper penalty dropped the point leader off the podium, moving Jensen Burnett (Parolin USA) to third. Orjuela fell to fourth with Karsyn Walters (Supertune / Tony Kart) up to fifth. 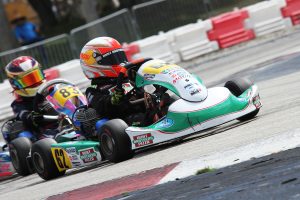 Two drivers stood out in the DNJ Intermodal Services Micro Swift category. Two-time winner Keelan Harvick (Nitro Kart) set fast time in qualifying but was edged out in the Prefinal by Augustus Toniolo (RPG/ Kosmic). In the Final, the two were able to break away from the rest of the field. Toniolo led the opening four laps until Harvick took over the point. Throughout the 20-lap race, Toniolo put on the pressure, but was unable to secure the top position as Harvick reached the checkered flag for a third straight time. Gianmatteo Rousseau (Nitro Kart) completed the podium with Alessandro Truchot (Parolin USA) in fourth and Isaac Malcuit (AKT / Kart Republic) in fifth.

The final round of the Superkarts! USA Winter Series will be contested on Sunday at the AMR Motorplex with the championships on the line, along with momentum to carry the teams and drivers into the summer season.