OTK Products Dominate at Challenge of the Americas Opener 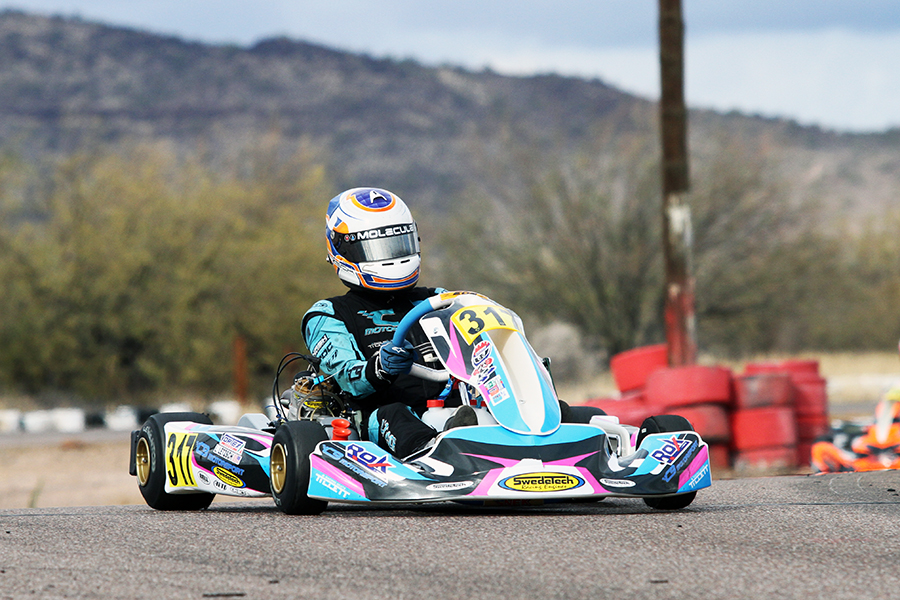 Liam Letzsch scored three victories on the weekend aboard the EOS chassis, including two in Senior ROK (Photo: eKartingNews.com)

The 2021 season is underway on the west coast as the Challenge of the Americas Presented by Royce & Baxter hosted its series opener at the Phoenix Kart Racing Association facility in Glendale, Arizona. The OTK product line was front and center throughout the January 22-24 weekend, securing top-five finishes in the eight categories that OTK USA dealers, race teams and drivers competed in over the two rounds of racing. In total, OTK brands accounted for 11 of the 20 wins on the weekend, collecting a total of 46 top-five finishes with 30 OTK entries earning podium hardware.

“This is a great start of the season on the West Coast,” commented Luis Ruibal, OTK USA.“Andy runs a great series that continues growing and we are happy to see our dealers and teams supporting him more and more.”

The Senior 100cc division was an OTK sweep of the top-five in both main events on the weekend. Blake Nash (Nash Motorsportz / EOS) and Liam Letzsch (CB Motorsports / EOS) each earned a victory. Letzsch ran second to Nash on Saturday before earning the victory on Sunday. Jenson Altzman (Ruthless Karting / Exprit) earned two podium results, placing third on Saturday and runner-up on Sunday. Privateer driver Mason Turnen (Tony Kart) had an amazing performance on the wet surface in Sunday’s main event to grab the third spot on the podium. Kyriakos Sioukas (Alex Keyes Racing / EOS) and Michael Michoff (SpeedSense Motorsports / Exprit) were fourth each day, with Hallie Schroeder (CB Motorsports / Tony Kart) and Dylan Wilkins (SpeedSense Motorsports / Exprit) capping off the top-five on Saturday and Sunday. 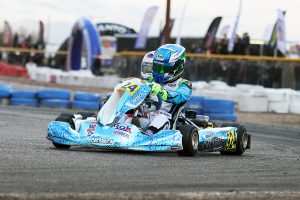 Blake Nash kicked off the 2021 Challenge season with his first series victory in the Senior 100cc division (Photo: eKartingNews.com)

Liam Letzsch (CB Motorsports / EOS) accounted for three of the total number of victories by OTK drivers on the weekend, including two wins in the Senior ROK division. Jenson Altzman (Ruthless Karting / Exprit) recorded a total of four podium results on the weekend in a double duty role, placing second and third in Senior ROK. Macy Williams (CB Motorsports / EOS) recorded two top-five results in her Senior debut, landing on the podium in opening round with a fourth-place result on Sunday.

Two-time defending Masters ROK champion Derek Wang (EOS) began his chase for a third straight title ring with two victories on the weekend. Billy Cleavelin (Rolison Performance Group / Kosmic) and Mike Smith (VMI / EOS) each landed on the podium in the third spot over the two rounds with Timothy Meyer (HRT / EOS) placing fourth and fifth over the two days of competition. In total, Meyer recorded four top-five results over the weekend running the EOS chassis, including a sweep of the victories in Masters 100cc. OTK swept all three steps in Rounds One and Two with Smith and Brian Phillipsen (MMK / Redspeed) each placing second and third on opposite days. Dana Estes (Ryan Perry Motorsport / Tony Kart) was fourth in both rounds. 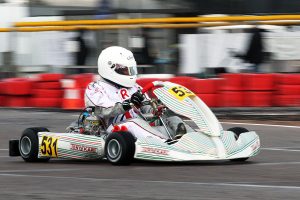 It was an OTK 1-2-3-4 each day in the Junior 100cc division. On Saturday, Christian Cameron (Alex Keyes Racing / Redspeed) took the victory over Stephen Eisert (SpeedSense Motorsports / Exprit) with Lanie Benjamin (Speed Factory / Tony Kart) in third. The trio mixed up the results on Sunday with Benjamin navigating her way to the top step of the podium ahead of Eisert and Cameron. Corbin Reuschenberg (Ruthless Karting / Tony Kart) and Lydia Small (Ryan Perry Motorsport / Tony Kart) finished fourth each day. Diego LaRoque (Tony Kart) and Deanna Hoffman (CB Motorsports / EOS) finished top-five both days in Junior ROK. LaRoque stood on the podium on Saturday as runner-up before contact late in Sunday’s main event dropped him to fifth. Hoffman drove to her best results at the Challenge with a fifth-place and a fourth-place over the two days.

Completing the victories on the weekend for OTK was long-time supporter Cliff Kujala. The owner of Pure Karting jumped back behind the wheel of a Tony Kart and was among the contenders all weekend long in the Shifter Masters ROK division. After a runner-up on Saturday, Kujala mastered the wet surface on Sunday to earn his first series victory. Completing the top-five success for OTK on the weekend was a pair of fifth place finishes in Micro ROK for the Challenge debut of Jerome Rondeau (Tony Kart).

The second event of the 2021 Challenge of the Americas Presented by Royce & Baxter is scheduled for February 26-28 at the CalSpeed Karting facility in Fontana, California. Drivers looking to compete with the most popular kart brand in the world or purchase OTK karts and components can contact their local OTK USA dealer. Head to www.otkusa.com for a complete list of dealers and details on the entire brand roster.