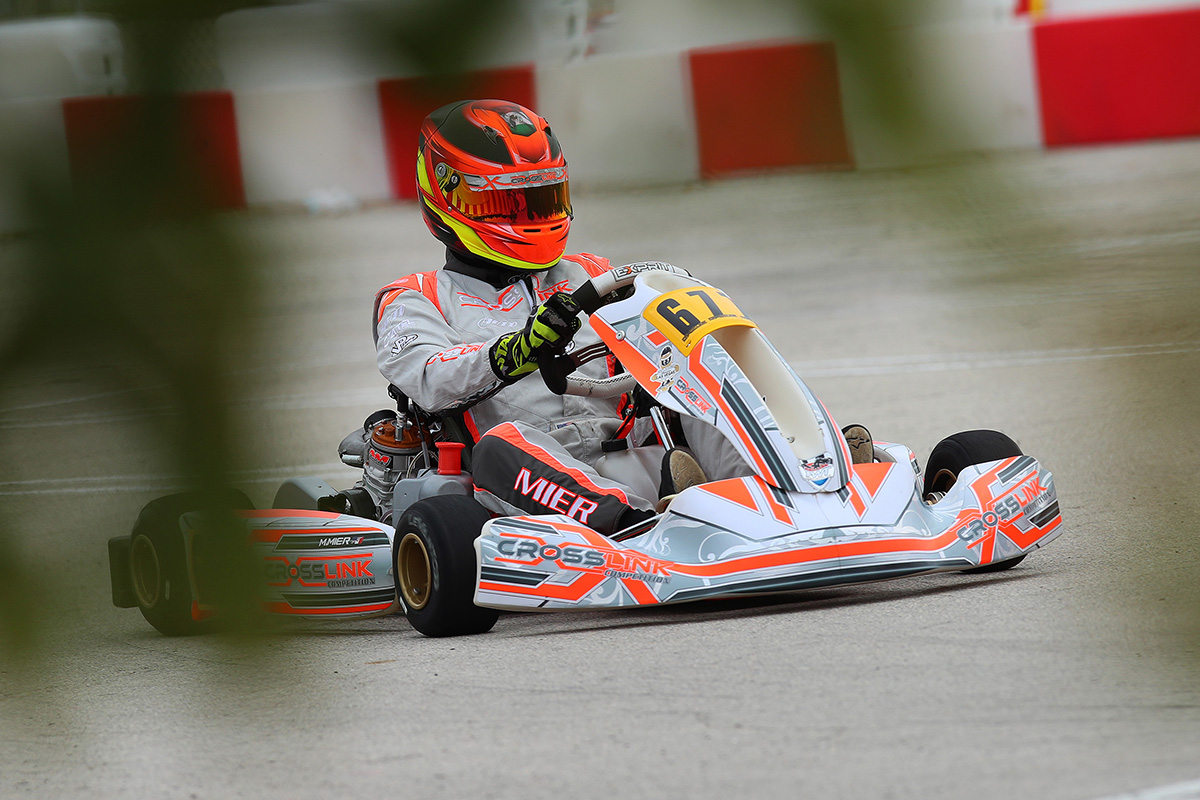 With one of the larger karting operations in the United States, Team Crosslink entered the 2021 Florida Winter Tour with only a handful of drivers. With the smaller sized program and more focus on the individuals themselves, all four Team Crosslink drivers finished in the top-eight in their respective classes. Senior ROK rookie Alex Stanfield led the way on the results sheet on Sunday with a fifth-place result while Ryan Shehan challenged for heat race wins on Friday and Saturday. Miguel Mier claimed a Master ROK podium result as Mario Barrios put two in the top-eight in the veteran division after all was said and done.

“Great start to 2021,” expressed Team Crosslink Manager Sean Owens. “Our program’s results continue to gain leaps and bounds from year to year and 2021 is no different.”

Ryan Shehan led the way for Team Crosslink through the event weekend as a second-place qualifying effort led to three second-place results in the heat races. Falling back one position at the start of the prefinal, Shehan managed to stalk the lead duo and hold on to a third-place result. Returning to the track on Sunday and poised to challenge for the race win, an opening lap scuffle put Shehan in the wrong place at the wrong time as he fell to 12th by the time lap two was complete. Working hard to move his way back forward, the young Texan scored the third fastest lap of the race en route to a seventh-place finish.

2020 United States Pro Kart Series Champion Alex Stanfield would try his hand in the Senior ROK category making the move from junior in the off-season. Matching his teammate’s pace, Stanfield put two Team Crosslink drivers in the top-five through the heat races as he finished fourth, fourth, and third. Having some bad luck in the prefinal on Saturday afternoon, Stanfield fell to tenth but returned Sunday gaining five positions in the main event to finish fifth.

In the afternoon sessions, it was Miguel Mier and Mario Barrios that would carry the Team Crosslink flag as they both competed in the Master ROK class. Barrios started his quest for victory from the outside of the front row courtesy of his second-place result in the prefinal and proved that he had the pace to compete, scoring a heat race win earlier on Saturday. Running in the second position for the majority of the main event, Barrios was overtaken only a few laps from the finish but held onto P3 to earn Team Crosslink their first podium of the 2021 Florida Winter Tour. Following the race, Barrios was given a penalty and relegated back to eighth on the results sheet while Mier advanced forward to take his spot on the podium.

ROK the RIO 100cc Masters Champion Miguel Mier threw his hat in the mix in Master ROK and claimed three top-five results in the heat races and continued that momentum into the prefinal. Running inside the top-five, an incident forced him to retire and his day was done. Returning to the track Sunday and taking the green flag from tenth, Mier gained the second most positions of any Master ROK driver advancing forward six spots to earn a third-place podium finish.

“While we did not have the largest contingent of drivers, it is nice to have all of them at or near the front of the field and for all of them to finishes in the top-eight,” explained Team Crosslink’s Sean Owens. “Our Masters program has always been strong but our Senior ROK drivers proved that they have what it takes to score race wins and podium results in 2021.”