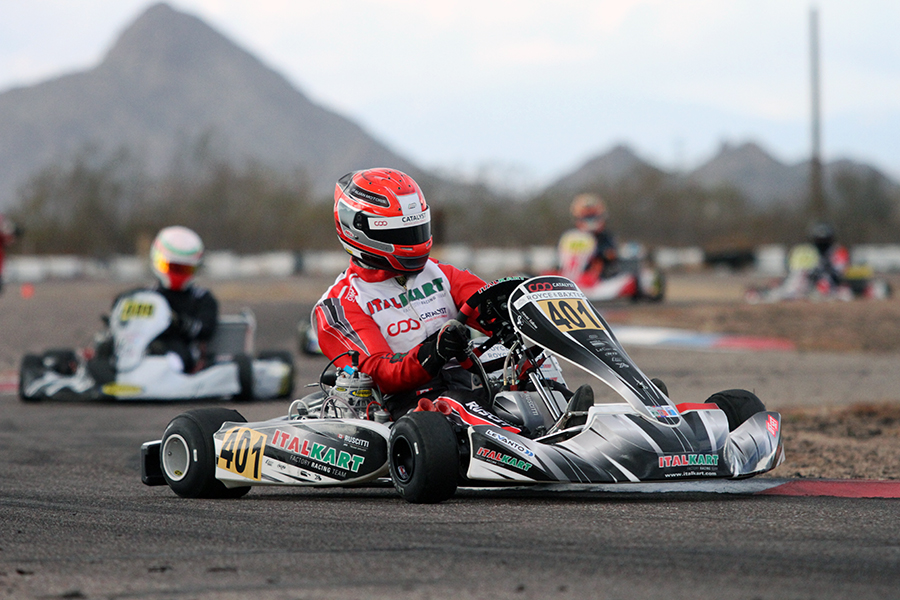 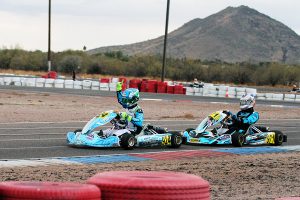 Eleven months after the COVID-19 forced cancellation of the final rounds of the 2020 Challenge of the Americas program, the popular West Coast winter series resurfaced at the Phoenix Kart Racing Association facility in Glendale, Arizona to kick off the 2021 schedule. Over 130 entries were logged for the first two rounds of the three-weekend, six-races series, with the Senior 100cc category boasting the largest grid with 31 racers. In the Shifter ROK categories, Italian Motors drivers Remo Ruscitti and Michael Valiante scored wins for Italkart in Senior and Masters, respectively, while Blake Nash and Liam Letzsch faced off in Senior 100cc with Nash coming out on top. Letzsch was not shut out of the top of the podium, winning in Senior ROK.

Canadian Remo Ruscitti (CDD / Italkart) was the driver to beat all day in the SwedeTech Shifter ROK category, topping qualifying over future FIA F3 driver Jak Crawford (Nash / Birel ART). Kyle Wick (GFC) then picked up the baton to challenge Ruscitti for the win, pushing him in both the Prefinal and the Final. The Italian Motors / Catalyst Driver Development pilot did not put a wheel wrong all day, and even with the relentless pressure from Wick, he finished the performance with a 0.236-second triumph. The lead group included five drivers for all 20 laps, and Kol Bailey (J3 / Compkart) earned the final step on the podium, coming home ahead of a race-long battle between Micah Hendricks (Aluminos) and Crawford. 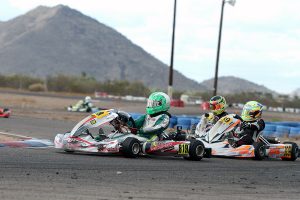 Liam Letzsch (CBM / EOS) stole the show in qualifying for Forward Direction Motorsports Senior 100cc, edging Blake Nash (Nash / EOS) for the pole by just 0.072 seconds. Nash took the lead from Letzsch midway through the Prefinal however, and looked to have things handled on the final circuit, but Blake left the door open in the final corner and Letzsch seized the opportunity to take the win and maintain his pole position for the Main. In the Final, Letzsch and Nash again pulled away to make it a two-driver fight, with Nash leading the final laps. On the last circuit, Letzsch made his move in the turn eight hairpin but Nash fought back in Daytona at the end of the backstraight and retook the lead. From there, Letzsch could not mount a challenge as Nash scored a 0.106-second victory. The fight for third was equally as exciting with Jensen Altzman (Ruthless / Exprit), Kyriakos Sioukas (AKR / EOS), and Hallie Schroeder (Syntech / Tony Kart) running nose-to-tail all race. Sioukas moved to third at one point, but Altzman retook third in the late going and held on for the final step on the podium. Sioukas and Schroeder capped the top five. 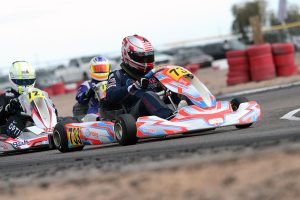 Tim Meyer held on for the win in of Masters 100cc (Photo: EKN)

Stephen Eisert (SSM / Exprit) topped the Italkart Junior 100cc qualifying session and then led the early laps of the Prefinal. That said, a terrific battle developed between Eisert, Lanie Benjamin (SF / Tony Kart), and Christian Cameron (AKR / Tony Kart) in the Prefinal, as all three would lead laps. Benjamin eventually moved back to the lead in the late going to secure the pole for the Main. The same trio squared off for the main event win, waiting until the late going to truly drop the gloves. Heading into the final five laps, Eisert and Cameron tried to pull away to make it a two-driver battle but eventually, Cameron made his move in the turn 10 banked hairpin to take the spot. Eisert tried to hold the outside but dropped a wheel on the exit. This allowed Benjamin to slip past and it also allowed Cameron to get away. Over the final two laps, Cameron held a lead of six tenths over Benjamin, who lost second on the final lap when Eisert made a move in turn eight. Corbin Reuschenberg (Nitro Kart) and Cooper O’Clair (CompKart) completed the top-five. 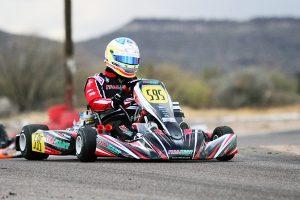 Michael Valiante scored his first major karting victory in over a decade with his Shifter Masters ROK debut (Photo: EKN)

CalSpeed’s Mike Smith (EOS) topped the charts in M2 Masters 100cc qualifying, outgunning Tim Meyer (HRT / Kosmic) for the top spot. Smith was out early in the Prefinal due to a broken rear bumper, and in his absence, Meyer scored the win as he was chased by Brian Phillipsen (Redspeed). Smith had to start at the tail of the field for the main, and snagged three spots on the opening circuit to get to fifth. He then worked his way to Meyers and eventually took the lead for a lap, but Meyer came right back and reclaimed the point. Over the last few laps, Meyer was on fire, turning his quickest lap on lap 13, and Smith simply couldn’t mount the necessary challenge to fight for the win. Phillipsen closed back up in the late going, but had to settle for third, while Dana Estes (RPM / Tony Kart) and Jimmy Gregory (K&K) capped the top-five. 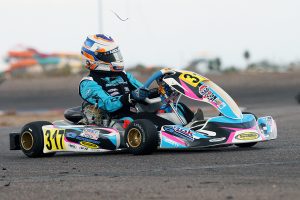 Defending champion Kevin Woods (RWR / CRG) pipped Michael Valiante (IM USA / Italkart) for the pole in Ron White Racing Masters Shifter, putting himself on the inside of the front row for the 14-lap Prefinal, and he then dominated the race. Valiante dropped to third early, but he found a way past Cliff Kujala (Pure / Tony Kart) to finish second. In the main, Valiante outgunned Woods through the opening corners to take the lead and he then held Woods at bay for many laps. The man on the move was Kujala, as the Tony Kart driver knifed forward and eventually passed both Woods and Valiante with decisive overtakes in the left-hand turn six. Kujala looked to have the race locked up but has an issue in turn 10 handed the lead back to Valiante, and the Canadian veteran would not relinquish the lead again and ended up with a 0.353-second win over Kujala. Woods held on for third while Nick Firestone (GFC) drove from 14th to fourth after issues in the Pre-Main. Firestone and Nick Brickman (GFC) slipped past Michael Guasch (Italkart) on the final lap to took fourth and fifth. 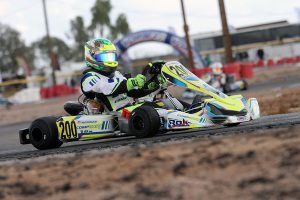 Liam Letzsch (CBM / EOS) scored the pole position by just 0.001 second over Andrew Zimmer (Italkart) to start the battle in Ruthless Karting Senior ROK and then romped to the Pre-Main by 2.5 seconds over Jensen Altzman (Ruthless / Exprit) after Zimmer went out on the opening lap. The final featured Letzsch leading the entire 20 laps as they battle behind him for second. Zimmer worked his way into the battle until a mechanical issue put him on the sidelines. That allowed Altzman to drive away in the second spot ahead of Macy Williams (CBM / EOS) and Gabe Tesch (Italkart) completed the top-five. 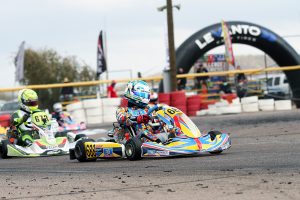 Local driver Diego LaRoque (Tony Kart) qualified on pole for the Acceleration Kart Racing Junior ROK class, but Frankie Mossman (CompKart) took over in the Prefinal to win by over a second. LaRoque was chased all race by Jesus Vasquez Jr. (Charles Leclerc). Mossman continued his pace in the Main, resulting in a 0.108-second victory. LaRoque challenged early in the 20-lap Final, but faded to hold the runner-up spot, while Vasquez was embroiled in a race-long battle with 2020 Mini ROK champion Tristan Young (VemmeKart) for the final position on the podium. Vasquez took third while Young was fourth at the checkered flag as Deanna Hoffmann (CBM / FA Kart) completed the top-five. 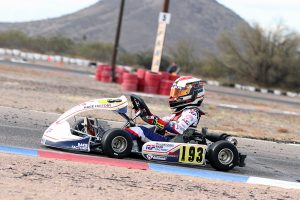 Two-time defending Odenthal Racing Products Masters ROK champion Derek Wang (EOS) simply dominated the action all day, qualifying on the pole and bolting away at the start of the Prefinal, while Adam Kasick (CompKart) held off Tim Meyer (HRT / Kosmic) and Mike Smith (EOS) to lock in the front two rows on the grid. In the Main, Kasick did his best to hang with Wang and did for a handful of the early laps, setting the fast race laps at the time in the process. Wang would not be denied and he pulled away to a 4.466-second win over Kasick. Veteran Billy Cleavelin (RPG / Kosmic) turned things up throughout the day and he was on the move in the main, passing Smith, and then Meyer, to take the final step on the podium. Meyer held on for fourth, but Smith got caught up in a couple of issues and fell to sixth, behind Pat Beckley (GFC). 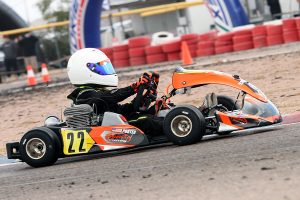 A statement day for Jaxon Porter in the Micro ROK division (Photo: EKN)

Race Factory drivers John Antonio and Gage Korn locked out the front row in GFC Mini ROK qualifying, and they would finish 1-2 in the Pre-Main as well. Antonino walked away to an almost six-second win while Korn dropped to third and had to battle hard with Truly Adams (VLR) to get back to second. Korn’s luck ended before the Main event started, as he was out of the race and on the sidelines, as was Gavin Whitt (CompKart), who would have certainly fought for a podium finish. This opened the door for Rocky Moran (Kart Republic) to step into a fight with Cypress Andruss (GFC) for the final position on the podium.  The duo could likely have caught Adams for second, but they elected to dice early and this allowed Adams to maintain his P2 position. Moran eventually emerged with third over Andruss, while Jacob Longnecker (VLR) drove up from 12th to fifth to complete the top five.

Scottsdale, AZ’s Jaxon Porter (Benik) qualified on pole in Empire Karts Micro ROK, and he would not be challenged for the remainder of the day. Porter dominated the Pre-Main and then stretched away to a 5.765-second victory to kick off the 2021 Challenge of the Americas. The battle for the final positions on the podium was close and was eventually decided with late race contact that dropped Rhys Bowman (Compkart) to the tail and elevated Ashton Woon (Nitro Kart) ahead of Braylon Underwood (Race Factory). Jerome Rondeau (Tony Kart) and Julian Sanchez (GFC) completed the top-five.

The drivers and teams will return the track on Sunday morning to attack Round Two of the series.