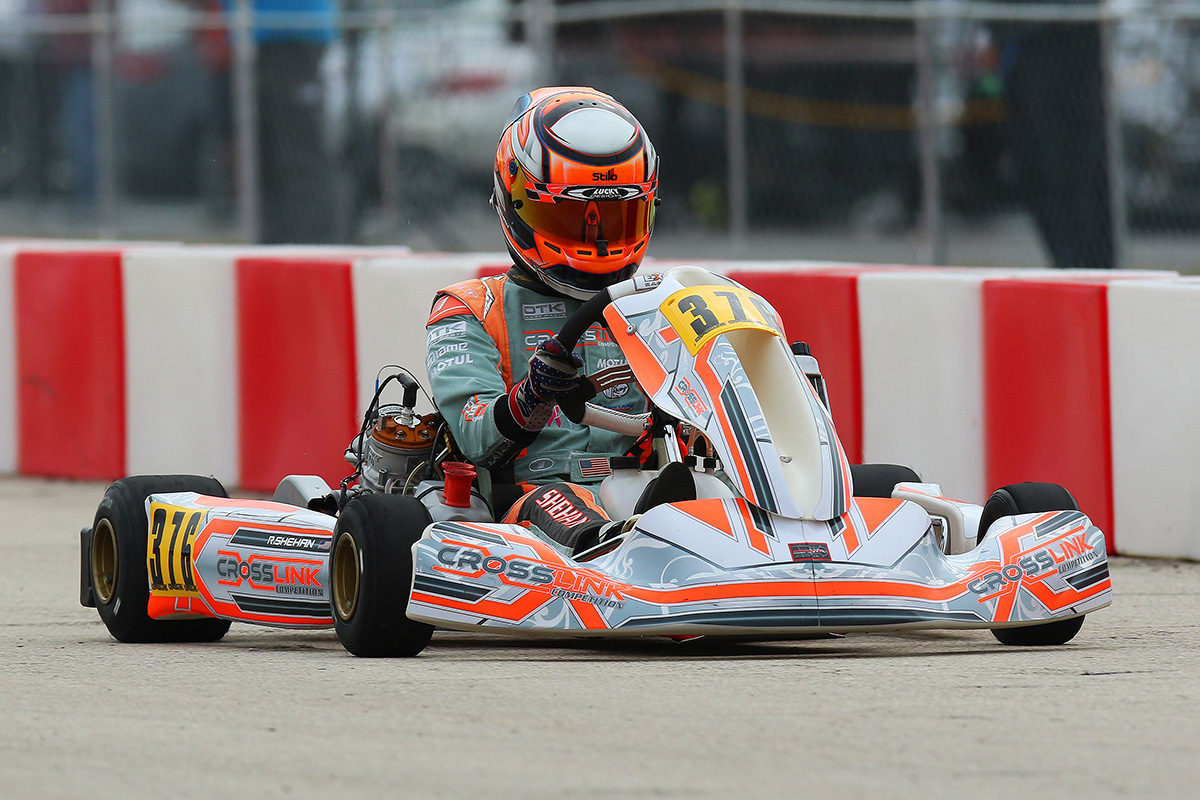 Ryan Shehan claimed a seventh place finish in round one of the
2021 Florida Winter Tour in Pompano Beach (Photo: CKN)

It was a great start to the opening round of the 2021 ROK Cup USA Florida Winter Tour for Team Crosslink’s Ryan Shehan. A solid qualifying performance on Friday led to three-second-place results in the heat races before a third-place finish in the prefinal. Taking Sunday’s main event start from the inside of row two, Shehan fell back outside the top-ten before working his way back forward to finish seventh and score the third fastest lap of the Senior ROK main event.

Shehan kicked off his race weekend showing great pace during Thursday’s four unofficial practice sessions and continued that into Friday afternoon’s qualifying and first of three heat races. Claiming the second-fastest lap of the timed qualifying session to secure an outside front row starting position, Shehan managed to maintain his spot through the first heat, stalking the leader but eventually finishing in P2.

Returning to the track on Saturday, similar results were obtained by the Team Crosslink driver. Finishing second again in heats two and three, Shehan started the weekend’s prefinal from the front. Losing one position in the opening complex of corners, the Texan managed to run some of the fastest race laps en route to securing a third-place result and inside row two starting position for Sunday’s main event.

“I have started on the outside in all of my heats and it is a very difficult position based on the opening few corners,” expressed Shehan. “Hopefully it works out better for me tomorrow but starting on the inside could help give me the opening lap advantage I need to fight for the win.”

Unfortunately, the start of the Senior ROK main event did not go as planned for Ryan. By the end of lap two, Shehan had fallen down the running order to eighth courtesy of an opening lap scuffle that saw him in the wrong place at the wrong time. Relegated further back over the next two laps to 11th, Shehan settled in and began to make his march back forward. Crossing the stripe in tenth on lap five, the Team Crosslink driver scored the fastest lap of the race on lap six, only to be outdone by the eventual race winner a lap later. Moving into ninth on lap seven and gaining another position a lap later, Shehan then worked to close the more than three-second gap to the group ahead.

With the leaders driving away from the field, competitors from third to fourteenth had an epic battle with Ryan right in the thick of it all. Methodically working his way forward trying to regain lost ground, Shehan crossed the stripe in seventh all while scoring the third fastest lap of the race.

Shehan continued, “It was a difficult final and not what we deserved for a solid weekend, but we proved that we had the pace to compete at the front of a talented field of Seniors. I will now shift my focus to the next event in St. Pete, but not before I complete another F4 test with Team Crosslink this week.”