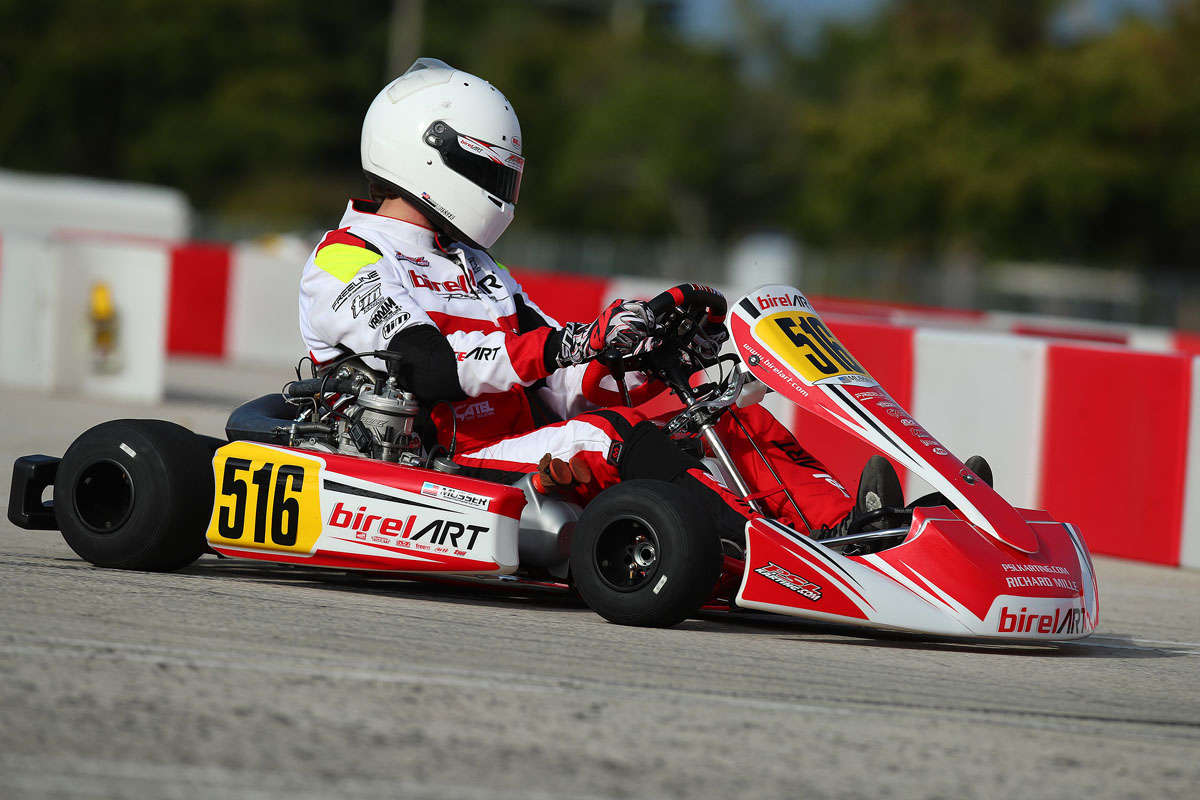 It was a winning weekend for Birel ART North America at the opening round of the 2021 ROK Cup USA Florida Winter Tour as Jordon Musser took home the top honors in Shifter Master ROK. Dominating the weekend, Musser swept the proceedings in the gearbox class while Jake French and Jack Jeffers added podium results.

“Another great event put on by the ROK Cup USA staff,” expressed Dominic Labrecque. “We are always so excited to get to the racetrack and see what we can do. A big thanks to our dealers for all of the continued support, and congratulations to Jordon Musser who continued his winning ways at the Florida Winter Tour.”

Claiming the 2020 championship title, Musser was the man to beat all weekend long. Earning the pole position, three heat races wins and prefinal victory, Musser secured the inside front row starting position for Sunday’s main event. Continuing his winning ways, Musser led every lap of the main event and topped the podium blocks to leave the Isle Casino with the Shifter Master ROK point lead.

Jack Jeffers was consistently at the front of the field in Junior ROK. Qualifying in the second position and winning the first heat race, Jeffers went on to finish second in the prefinal. Starting the main event from the outside of the front row, Jeffers earned his first podium as a Birel ART driver. Rookie driver Caleb Gafrarar was in the top-ten throughout the weekend qualifying in the fourth position and eventually earning an eighth-place result on Sunday.

In the Shifter ROK division, Jake French pushed his machine to the third step of the podium as four Birel ART drivers finished in the top eight. French would lead the way in qualifying for the quartet with a second-place result and continued his momentum to the main event. Eduardo Barrichello put a second Birel ART driver in the top-five in fifth while Michael Stevens and Davide Greco finished sixth and eighth respectively. Red Bull Junior driver Jak Crawford returned to karting with the Nash Motorsportz crew and had a strong performance running inside the top-five for the majority of the race weekend.

Ben Cooper earned a top-ten finish in the Senior ROK class after running in the top-five during the first half of the final while fellow Birel ART driver Mauricio Hernandez showed great pace qualifying in sixth and finishing eighth in the prefinal. Salim Hanna put the Team Montoya Birel ART machine in the top-five in VLR Junior qualifying and earned a ninth-place result at the end of the weekend.

With a short break, Birel ART North America will return to Florida in February for two more karting events.

For more information to become part of the Birel ART, Ricciardo or Charles Leclerc dealer networks or information on how to join the PSL Karting / Birel ART North America Race Team for the 2021 season, please contact Dominic@PSLKarting.com