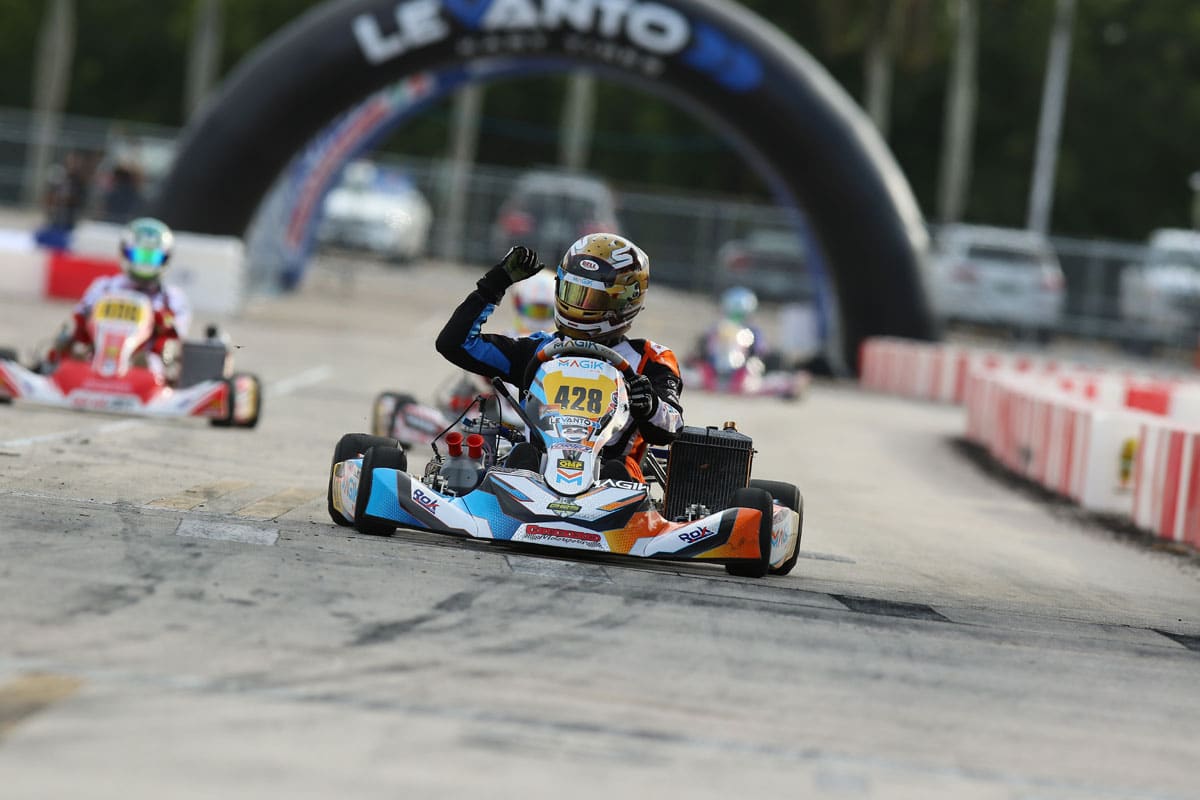 After three days filled with racing from sunup to sundown, ROK Cup USA and the 203 entrants prepared for the final day and events of the weekend. Known as Finals Day, ROK Cup USA Florida Winter Tour winners were crowned in ten different classes. While there were many stars of the race weekend, Connor Zilisch and Paul Bocuse proved to be the big winners claiming a pair of main event victories as both drivers dominated their respective divisions. 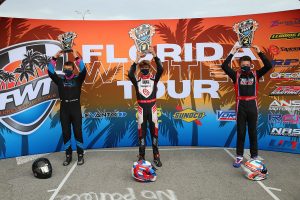 Racing Edge Motorsports VLR Junior
In the final event, Paul Bocuse was chasing down his first main event win of the weekend. After starting on pole, Bocuse led five drivers including Danny Dyszelski, Chase Hand, Salim Hanna, and Helio Meza through the start and the first lap of the race with no changes to the starting order. Over the next four laps, Meza, Hanna and Ingratta battled for the fourth position. With a battle going on behind them, Bocuse, Dyszelski and Hand begin to pull away from the rest of the field with a two second lead. As the race reached the halfway point, the drivers began to settle into their positions and Ingratta was able to run down the top three drivers with a 3.790 second lead over fourth. Over the next three laps, Ingratta made a charge past Hand and Dyszelski for second. Passing the finish line on the final lap, Bocuse took home the win with Ingratta following in second. After penalties were assessed, Ingratta was given a five-position penalty and dropped back to seventh for a start line infraction. 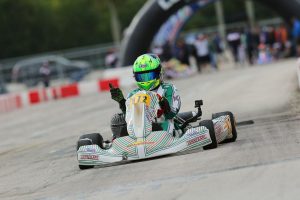 Nash Motorsportz VLR Senior
Over the course of the weekend, Connor Zilisch and Thomas Annunziata led the VLR Senior class, finishing one-two in each race. At the start of the race, Cole Schroeder fell back through the field with Blake Nash and Derek Morton moved into fourth and fifth respectively. Two laps later, Nash passed Hallie Schroeder for third as Zilisch and Annunziata drew away from the field. As the halfway point of the race approached, drivers settled in with Zilisch continuing to lead over Annunziata with Nash and Morton following behind. At the end of twenty laps, Zilisch took home the main event victory in VLR Senior, adding to his heat race and prefinal wins earlier in the weekend. 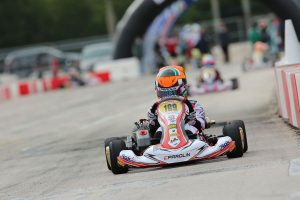 Leading Edge Motorsports Mini ROK
As twenty-five Mini ROK drivers took the green flag, Matias Orjuela lead the field through a clean start with zero spins, crashes or penalties. As the drivers shuffled their positions, Orjuela and Enzo Vidmontiene stayed one-two and Oliver Wheldon moved up into third ahead of Carson Weinberg. On lap four, Wheldon moved up to second over Vidmontiene and held the position for the remainder of the race. On the sixth lap, Jordan DiLeo hit the wall while running in eighth and dropped to the tail of the field. Two laps later, Sarah Bradley made contact with the wall and was also forced to retire. Weinberg was able to get past Vidmontiene for third on lap eight and for the remainder of the race, it was a back-and-forth battle between Luis Umana, Vidmontiene and Jensen Burnett for fourth. Lap after lap, both Asher Ochstein (Benik) and Sebastian Garzon (Orsolon Racing) continued to plow their way through the field, gaining position after position. By the end of the twenty laps, they had both gained eleven positions each with Ochstein finishing in twelfth and Garzon finishing in eighth. Matias Orjuela went uncontested for the win ahead of Wheldon and Carson Weinberg. 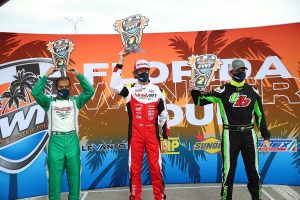 ANSA Motorsports Shifter Master ROK
While drivers battled for behind him, Jordon Musser could not be beat in the final event. After winning every prior race of the weekend, Musser started on pole from the final and never looked back. After five laps, Musser had created a 2.350-second lead over Victor Jimenez in second. Through the entirety of the race, drivers battled for positions three through six – drivers in the mix included Daniel Dibos, Luis Mendez, Michael Rivera, Luis Sanchez-Bedoya and Rene Martinelli. On lap nine, Martinelli passed Jimenez and took over the second-place position. By the halfway point in the race, Musser had stretched his lead to over four seconds ahead of Martinelli in second and by the end of the race, he crossed the finish line 11.106 seconds ahead of his nearest competitor. Rene Martinelli held on for second ahead of Jimenez, Dibos and Luis Sanchez-Bedoya. 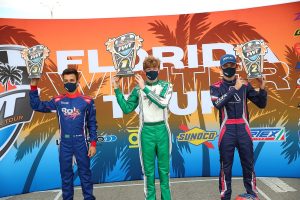 Rolison Performance Group Senior ROK
In the opening lap of the race, some drivers struggled while many excelled causing several bottlenecks over the first complex of corners. In the first turn, Lucas Pernod (PSL/BCR) and Nicholas D’Andrea made contact and spun while Pernod was able to continue, D’Andrea eventually retired. At the same time, Thomas Annunziata and Ben Cooper took advantage at the start and each gained three positions, taking over the third and fourth positions, with Cooper passing Annunziata for third the next lap. Alex Stanfield quickly moved through the pack, picked up five positions in two laps and settled into fifth. By lap seven, Annunziata was able to slip by Alex Stanfield and Diego Ramos, who took over fourth and fifth. Over the next five or so laps, Annunziata, Ramos and Stanfield battle for the fifth-place position. Santiago Trisini, who started in fourth, but fell back at the start of the race, began working his way back up the field and took back his fourth-place position with eight laps remaining. With only five laps to go, Zilisch and Norberg had extended their lead over the rest of the field by over ten seconds and with three laps remaining, Cooper, while running third made contact and dropped back, making way for Ramos, Trisini and Stanfield to move up into third, fourth and fifth.

Connor Zilisch claimed his second win of the day after winning early in the VLR Senior race. Zilisch had a perfect weekend, winning every single heat, prefinal and main event in both Senior ROK and VLR Senior. 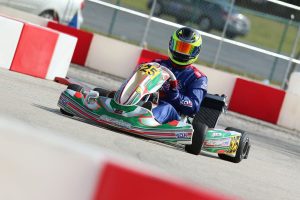 Orsolon Racing Master ROK
In the Master ROK class, drivers who started the race in the front of the field, ended in the back – with the exception of Renato Jader-David, who remained perfect and won for the fourth time of the weekend. Frank Runco started fourth, fell back five positions to ninth while Scott Roberts was the opposite gaining nine positions to finish on the second step of the podium.  Jumping up to fourth by lap four, third on lap eight and passing Mario Barrios for second with only one lap to go, Roberts was the biggest mover of the race. Miguel Mier cut through the pack after starting tenth, and worked his way through the field, placing himself in fourth on lap twelve. Mier ended up being awarded third after Barrios was given a five-position penalty post-race for a start line infraction, taking away a podium result. While Jader-David, Roberts and Mier were on the podium, Pablo Cevallos and Scot Carpellatti rounded out the top-five. 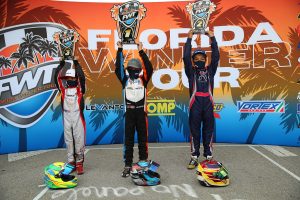 Zanella Racing Micro ROK
The youngest drivers in of the weekend put on a show in their final race. Augustus Toniolo, who had previous won all three heat races, the pre-final and was starting on the pole position for the main event, was expected to continue his dominance in the final. However, all of the Micro ROKKERS came with their A-game and gave Toniolo some tough competition. At the start of the race, the first three on grid held their positions, but Toniolo didn’t hold his lead for long. On lap two, Max Cristea passed for the point and the top four drivers began their charge away from the rest of the field. For the next few laps, Toniolo and Cristea battled for the lead position. Behind them, Alessandro Truchot and Matheus Ramahlo were in a heated battle for third. Only four laps in, Toniolo fell back to P3 behind Truchot. For the remainder of the race, Toniolo, Cristea, Truchot and Ramahlo swapped places in a back-and-forth battle. With four laps remaining, the top four drivers were more than nine seconds ahead of their other closest competitors. On the final lap, Cristea slid past Toniolo and took the lead – ultimately winning his first Florida Winter Tour race. 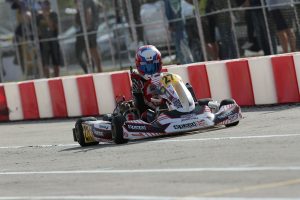 Speed Concepts Racing Junior ROK
After a relatively calm weekend, with no major crashes, the Junior ROK Final had barely begun before chaos broke out. Going into turn two of the first lap, multiple karts collided, with the pileup forcing the only red flag of the weekend. The Junior ROK race was then postponed until after the VLR Master race to give drivers time to gather their bearings and make any fixes to their karts.

At the restart, twenty-nine of the thirty-one entered made it to grid. On the restart, Cameron Weinberg moved up into third behind Paul Bocuse and Jack Jeffers, before falling back into fourth behind Noah Baker. On lap four, Logan Toke moved into fourth, pushing Weinberg back to fifth. For the remainder of the race, Bocuse led Baker, Jeffers, Toke and Weinberg to the finish line.  A little further back in the field, Alexander Berg (Ryan Perry Motorsports) moved up seventeen positions to finish in eighth while Toke scored the fastest lap of the race. 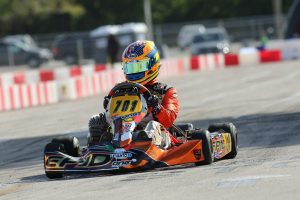 Utah Motorsports Campus VLR Master
Similar to a few other classes this weekend, Martin Stone took the win in all of the events leading up to the Final and continued his streak to take home the win in the final race. Behind him, Antony Simone followed across the finish line in second. Cayden Goodridge was the biggest mover of the race, moving from last to fifth on the first lap, then up to fourth on lap two. Only five laps into the race, Goodridge moved into third to finish on the podium. Ruben Cherres crossed the line in fourth while Ron Jenkins earned a fifth-place result. 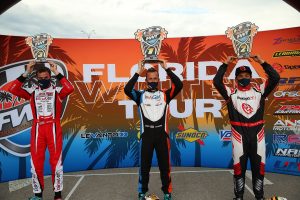 PSL Karting Shifter ROK
At the start of the race, the front four drivers battled aggressively before settling back into their original starting position. As AJ Myers led, Mathias Ramirez stalked him closely throughout the race as Jake French settled into third. With the front three remaining unchanged, and with only three laps remaining, Barrichello passed Stevens for fifth and ran behind Austin Garrison who made his return to the Florida Winter Tour with Rolison Performance Group. Remaining static for the remainder of the final, Myers scored the win ahead of Ramirez, French, Garrison and Barrichello. Giano Taurino had an incredible race, moving up twenty-one positions to finish in eleventh. Jak Crawford also made moves through the field gaining eighteen positions to finish thirteenth and Vincenzo Sarracino made up thirteen positions, finishing in sixteenth.