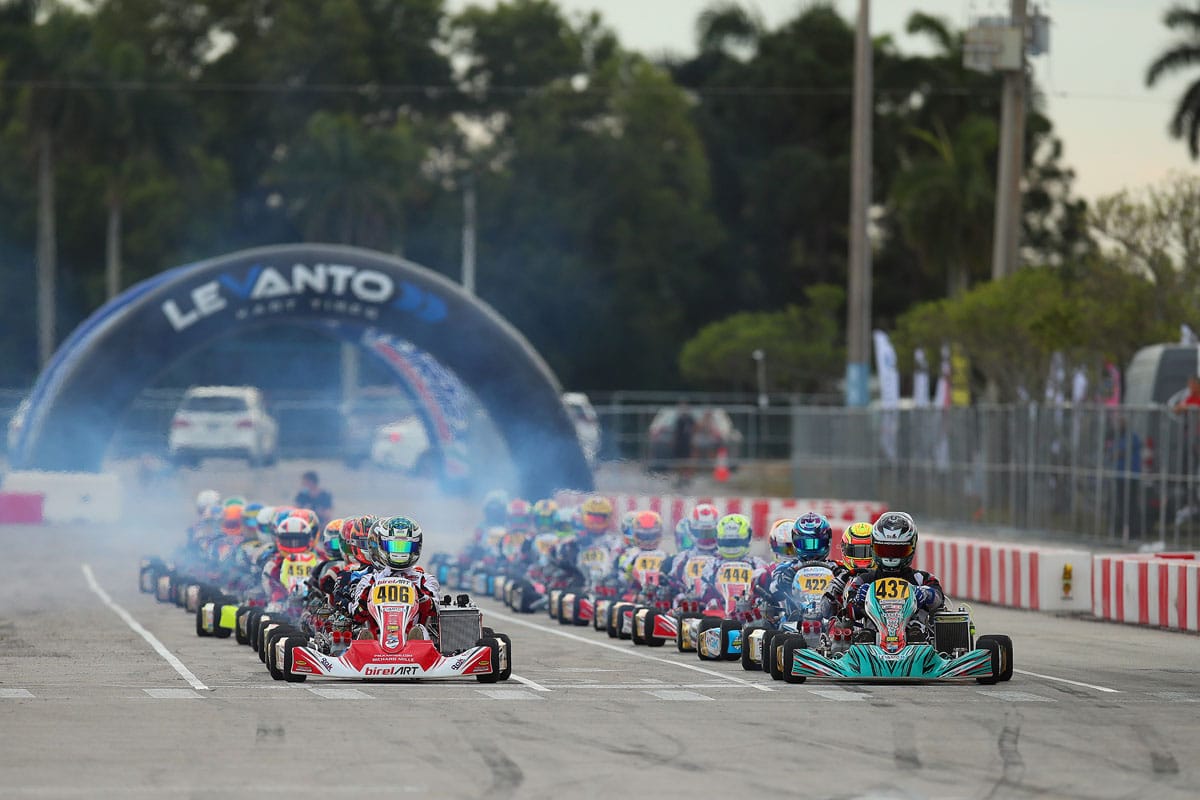 After an unusual 2020 season, ROK Cup Promotions is excited to be back on track and kicking off their 2021 event calendar this weekend at Isle Casino in Pompano Beach, Florida for the first round of the prestigious Florida Winter Tour.  On the temporary circuit, located on the grounds of Isle Casino, drivers from around the globe will be taking part in the 23rd annual event.

With morning practice sessions, lunch break and drivers meeting all complete, qualifying began at 12:40. Drivers in each class had just one qualifying session to put down their best lap while on the hunt for the pole position.

Racing Edge Motorsports VLR Junior
In the first qualifying session of the weekend, nineteen 100CC Junior drivers took to the track for the eight-minute session. Right out of the gate, the drivers quickly got up to speed and began putting down fast laps, but it wasn’t until the final few laps when each driver claimed their fastest laps. Finishing with a top time of 53.932 seconds, Paul Bocuse (Speed Concepts Racing) claimed the pole position. Following in behind Bocuse were Chase Hand (Rolison Performance Group) with a time of 53.974 and Danny Dyszelski (Ryan Perry Motorsports) with a time of 54.011. In the entire field, the top thirteen drivers scored a time within one second of pole position.

Leading off the start of the first heat, Paul Bocuse was able to hold his lead throughout the entirety of the race to take home a win. In the early stages of the race, Helio Mexa (Iron Rock Motorsports) was battling Bocuse for the lead, but after going wide through a turn on lap six, he fell back to the eighth position and Salim Hanna (Team Montoya) slotted in to second. With four laps remaining, the top four drivers – Bocuse, Hanna, Hand and Sebastian Wheldon (JC Karting) – began to pull away from the rest of the field. Up until the very end, the drivers in VLR Junior fought for their positions. On the final lap, Wheldon battled with Danny Dyszelski (Ryan Perry Motorsports) for second and ultimately made the pass to finish second with Dyszelski finishing third.

Similar to the VLR Junior class, polesitter Connor Zilisch took the lead at the start of the race and held his position for the entirety of the race to take the win. Annunziatta also finished in his qualifying position of second. In the first lap of the race, Derek Morton began to fall towards the back and Hallie Schroeder was able to take over third for the remainder of the race, followed by Blake Nash, who started and finished in fourth.

Leading Edge Motorsports Mini ROK
With 24 Mini ROK entrants, Matias Orjuela (Parolin USA) was able to put down a fast time of 57.213 on his fourth lap and claim the pole position. Following behind him, sixteen other Mini ROK drivers put down times within one second of Orjuela, led by Sebastian Garzon (Orsolon Racing) in second, Oliver Wheldon (JC Karting) in third, Jordan Dileo (Goodwood Kartways) in fourth and Enzo Vidmontiene (Team Benik) to round out the top-five.

With a pattern beginning to appear, pole sitter Matias Orjuuela took the win in heat one. Oliver Wheldon (JC Karting) quickly slotted into the second position by the end of lap two and held his position for the remainder of the race. After qualifying fifth, Enzo Vidmontiene gained two positions to finish third.

ANSA Motorsports Shifter Master ROK
Within the first three minutes of the qualifying session, Jordan Musser (PSL) jumped to the top of the charts, where he remained for the rest of the session, claiming the pole position in Shifter Master ROK at Isle Casino for the second year in a row. Setting a fast time of 51.414, Rene Martinelli (TB Kart USA) finished the qualifying session in second followed by Victor Jimenez (RPG).

Rolison Performance Group Senior ROK
The largest class of the weekend, Senior ROK, also saw some of the closest lap times. With thirty-three drivers in the field, the top twenty fastest drivers in qualifying were all within one second of the pole time, which was set by Connor Zilisch (Late Apex Kartworks) with a time of 52.036. Rounding out the top-five in qualifying were Ryan Shehan (Crosslink), Ryan Norberg (Rolison Performance Group), Jonathan Portz (RPG) and Alex Stanfield (Crosslink).

Within the first two laps of Heat One, Ryan Norberg was able to work his way to the front of the field, but Zilisch and Shehan were ultimately able to regain their starting positions, and the top three finishers finished where they qualified, with Zilicsh taking the lead followed by Shehan and Norberg. Throughout the remainder of the field, Santiago Trisini (Nash Motorsportz) and Filip Niemkiewicz (Performance Kart Sport) were both able to move up six positions to finish sixth and tenth respectively. Pauly Massimino gained seven positions in the 12-lap race to finish twelfth.

During the only heat race of the day, Jader-David held his lead to finish in first with a 4.419-second lead over second place finisher Scott Roberts. Matching the qualifying results, Miguel Mier finished in third. Further back in the field, Nelson Chavez (Zanella Racing) quickly gained four positions to finish out the top five.

Zanella Racing Micro ROK
By the fourth lap of the qualifying session, Alessandro Truchot (Parolin USA) put down his fastest lap of 59.127, however, with only two minutes remaining, both Augustus Toniolo (Rolison Performance Group) and Max Cristea (Magik Kart USA/Checkered Motorsports) put down fast laps and were able to sneak in to the first and second positions. Polesitter Augustus Toniolo was the only driver in the Micro ROK class to break into the 58-second mark.

In a class full of young drivers, all twenty-one entrants made it through the first lap of heat one. Holding onto his pole position, Toniolo maintained his lead to the end with Cristea and Truchot coming in second and third. Phaethon Saradpon (AKT) made a move during lap four and was able to break into the top-five.

Speed Concepts Racing Junior ROK
In one of the larger classes of the weekend, Paul Bocuse (Speed Concepts Racing) set a fast time of 52.350, beating out thirty other drivers – twenty-two of whom were within one second of his time. Closely following him were Jack Jeffers (PSL Karting), Noah Baker (Supertune), Caleb Grafrarar (PSL Karting) and Salim Hanna (Team Montoya).

After receiving a penalty from the start of the race, Paul Bocuse was relegated two-position down the running order. Finishing ahead of him and winning Heat One was Jack Jeffers followed by Noah Baker. Cameron Weinberg (Supertune) and Kai Sorensen (Parolin USA) each gained two positions and were able to finish in the top-five. Frankie Mossman (J3 Competition) had an incredible race, moving up ten positions from twentieth to tenth. However, the biggest mover of the race was Sam Corry (Mike Doty Racing) who gained thirteen positions.

With a strong start, Ruben Cherres (SLAKART) moved up three positions to finish second behind Stone. Cayden Goodridge and Ron Jenkins held their third and fourth place positions through the entirety of the race.

In the final heat race of the day, Danny Formal held his lead to finish with a win. The top four positions saw no change from qualifying with drivers finishing where they started. Mathias Ramirez (Speed Concepts Racing) moved up three positions to take the fifth spot.

With the first wheel-to-wheel action of the weekend complete, Saturday will see two additional heat races with results setting up the grid for the day’s prefinals. Stay tuned to the ROK Cup USA social media pages for more news, photos, information and results by following @ROKCupUSA on Facebook, Twitter and Instagram.