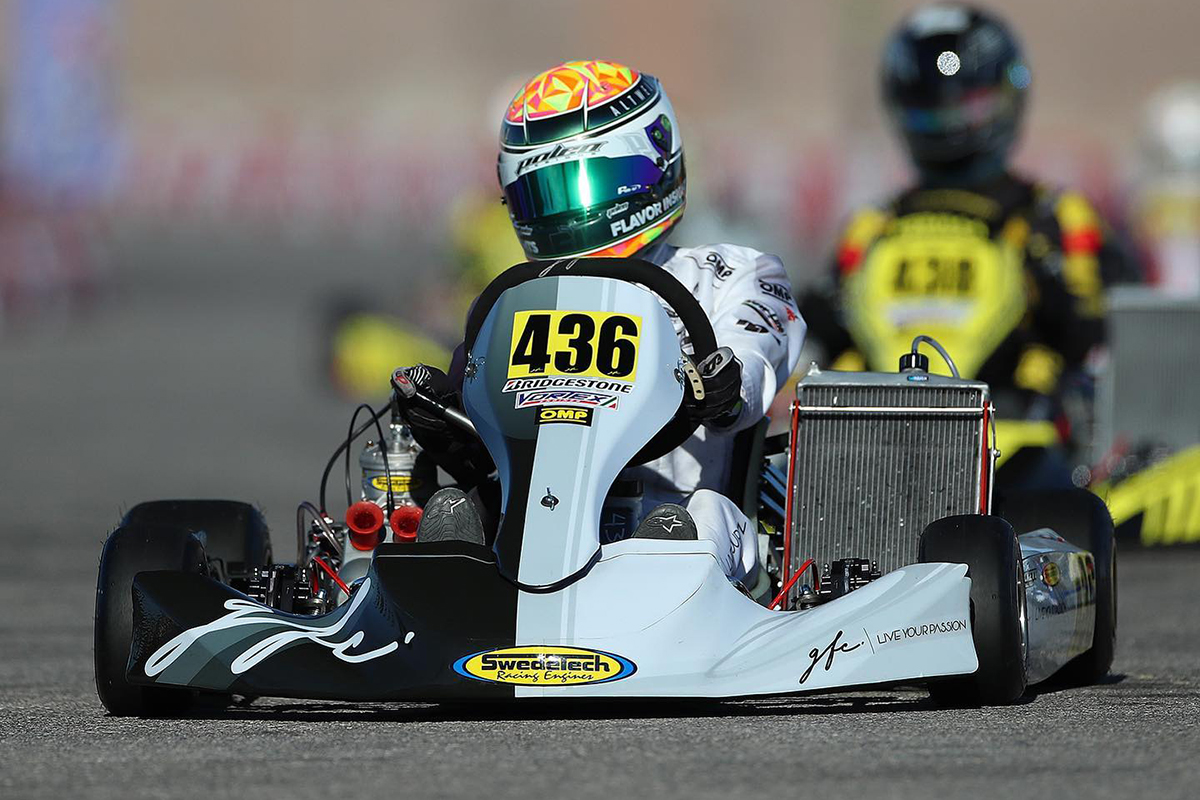 The GFC chassis celebrated its two-year anniversary at the end of the 2020 season, securing two major victories to close out a challenging year on and off the track. The chassis developed by American karting star Gary Carlton is one made from passion. Carlton has devoted his life to the sport of karting and has transitioned from driver to entrepreneur with the launch of GFC Karting. The operation is gearing toward its third season, set to begin with the winter programs both on the east coast and on the west coast.

The 2021 season begins with the GFC heading east to the ROK Cup USA Florida Winter Tour. The opening event of the historic program is set for January 14-17 at the Isle Casino in Pompano Beach, Florida. GFC Karting is working with dealer Rivera Racing for the series, fielding six drivers in four categories. 2020 Challenge of the Americas Shifter ROK champion Hunter Pickett is committed to better himself as a driver, set to battle against the East coast drivers with F Series race winner Jason Henrique joining him. Mike Rivera and Carlos Lopes are the two drivers for GFC in the Shifter Masters ROK category. Frankie Iadevaia is set for his second season aboard the GFC brand, competing in the Junior ROK division. California driver Nico Sarphati is set for his FWT debut to help develop his skills against the strong competition in Florida as he begins his first full season in the Mini ROK class 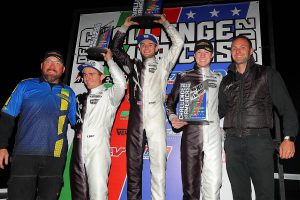 “Team GFC will continue working closely with all of its dealers, like Rivera Racing, by teaming up as we are during the Florida Winter Tour,” commented Carlton. “I feel the best way to support our GFC dealers is to have our official drivers and team staff work directly underneath their tents. I feel this is the best way to provide true factory support. This way we are providing our dealers the best opportunity of learning everything there is to know about the GFC line of chassis to help support their customers just like if they were running with the Official Team. This FWT program will be our first step in gaining information on the development of our chassis line going into the new 2022 homologation period.”

A short turn around as the season on the west coast begins the following weekend with Challenge of the Americas opener set for January 22-24 at the Phoenix Kart Racing Association facility in Glendale, Arizona. Coming off a strong 2020 season at COTA and the California ROK Championship, Team GFC is stacking the deck with 15 drivers. The defending championship team in the Shifter ROK division will field eight drivers in what will be the largest category of the series. One of the big additions to the team is 2019 Superkarts! USA Pro Tour Pro Shifter champion Kyle Wick joining Team GFC. The Washington driver brings brother Conner Wick to join the team. Late additions in 2020 included former SKUSA ProMoto Tour champion Alan Sciuto and Keawn Tandon. EKN Top-50 TaG Driver Rankings driver Jacob Gulick is making the transition to shifter with Team GFC, with Tyler Krenek and Josh Campbell complete the GFC roster. Longtime front-runner Nick Firestone and Adam White fill out the Shifter Masters ROK roster on the GFC brand. 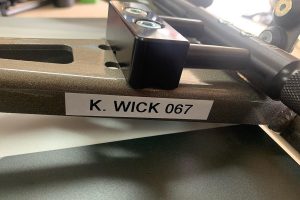 Team GFC has partnered with the historic American chassis brand of Trackmagic, beginning at the end of 2019. Trackmagic and Team GFC won the ROK the RIO with professional driver Oliver Askew coming back to his roots to score the victory. Trackmagic is putting its support behind Cole Shade for the 2021 season. Shade was the 2020 California ROK Championship title winner and vice-champion at Challenge of the Americas. A rib injury put him on the sidelines at ROK the RIO, with the COTA opener his first major event since November.

From the start of the GFC brand, a lot of focus has been put into the single speed categories. A victory at ROK the RIO and a new partnership with Formula Works has shown the vast improvements in the development of the SS31 TAG chassis. Josh Campbell will represent Team GFC in Senior 100cc with Preston Lambert in Junior 100cc. Patt Beckley is the lone driver in the very competitive Masters ROK division. Cypress Andruss and Julian Sanchez round out the Team GFC roster for COTA, competing in the Mini ROK and Micro ROK classes.

“The COTA weekends are going to see a lot of GFC karts on the track,” added Carlton. “Hunter Pickett will take on the lead as our driver coach in the first two COTA events while taking part as a driver in the last round in Sonoma. Team GFC and Formula Works are making an even stronger bond by having both teams run side by side at all the events to help strengthen both teams and help give every driver factory support. Our Masters driver White is from the U.K., having worked with McLaren F1 and now Tesla for vehicle dynamics. He will be helping Team GFC develop new ideas for the GFC line.” 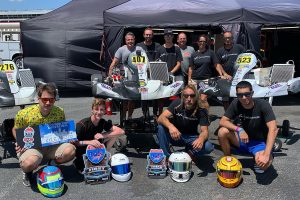 Rivera Racing will support GFC at the Florida Winter Tour and remains the bedrock for the brand in the northeast US region (Photo: Rivera Racing)

One of the key aspects to Team GFC is the Young Driver Development Program. Carlton has been very focused on helping to develop future stars of karting and motorsports in general. His passion to assist in the improvement both on and off the track of young drivers began over a decade ago, including IndyCar and now IMSA driver Oliver Askew. The program is not for just national drivers, but those at the regional and club level. Returning for the 2021 season include Andruss, Sarphati, Julian Sanchez, and Will D’Elia. New recruits for the year are Preston Lambert, Taylor Cason, Kailey Meris.

Carlton added, “Our Young Driver Development Program is where I can put my over two decades of competing to practice, and not just over one weekend but across days and weeks working with young talent. The program will put even more emphasis on the off-track performance and preparation. Physical and mental training established by world class trainers specifically designed for karting. Our program offers and encourages drivers to work in the GFC Factory to learn how to work and maintain their own karts along with learning the technical dynamics of the chassis and engine.”

As the 2021 season begins, GFC Karting is happy to announce CMC as the new dealer for the Northwest market. CMC owner Don Holmboe has decades in the karting industry, and will provide a sound base for growth in the Washington and Oregon region. Rivera Racing provides product and support for the Northeast, Scuderia Little in Utah, Formula Works for the southern California market, Ruthless Karting in Arizona and DL Racing based in Florida are returning for 2021 as GFC Karting dealers. 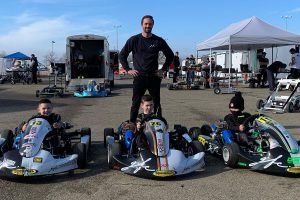 A key aspect to the growth of Team GFC is the Young Driver Development program, welcoming seven drivers in 2021 (Photo: GFC Karting)

“I am thrilled to have the GFC now supported in the Northwest with Don Holmboe and CMC. With over 30 years of karting experience its very safe to say the GFC brand will be represented in the best way possible. I cannot wait to get our technical staff up north to start working with the boys at CMC. The GFC Brand is looking to expand its dealer market across the US. There are certain markets that are still up for grabs.”

Team GFC is gearing up for the remainder of the 2021 schedule following the FWT and Challenge of the Americas programs. ROK Cup USA Festivals on both the east coast and west coast will be on the travel program, along with the California ROK Championship. The SKUSA Pro Tour SpringNationals in Utah is on the docket along with ROK the RIO and SKUSA SuperNationals 24 in Las Vegas. Regional events such as KPX Karting Championship and ROK Sonoma in northern California along with Tri-C Karters and LAKC in SoCal will be on the calendar once their event schedules are released.

For more about Team GFC and the full chassis line along with the Young Driver Development Program, visit www.gfckarting.com and follow them on Social Media @gfckarting.