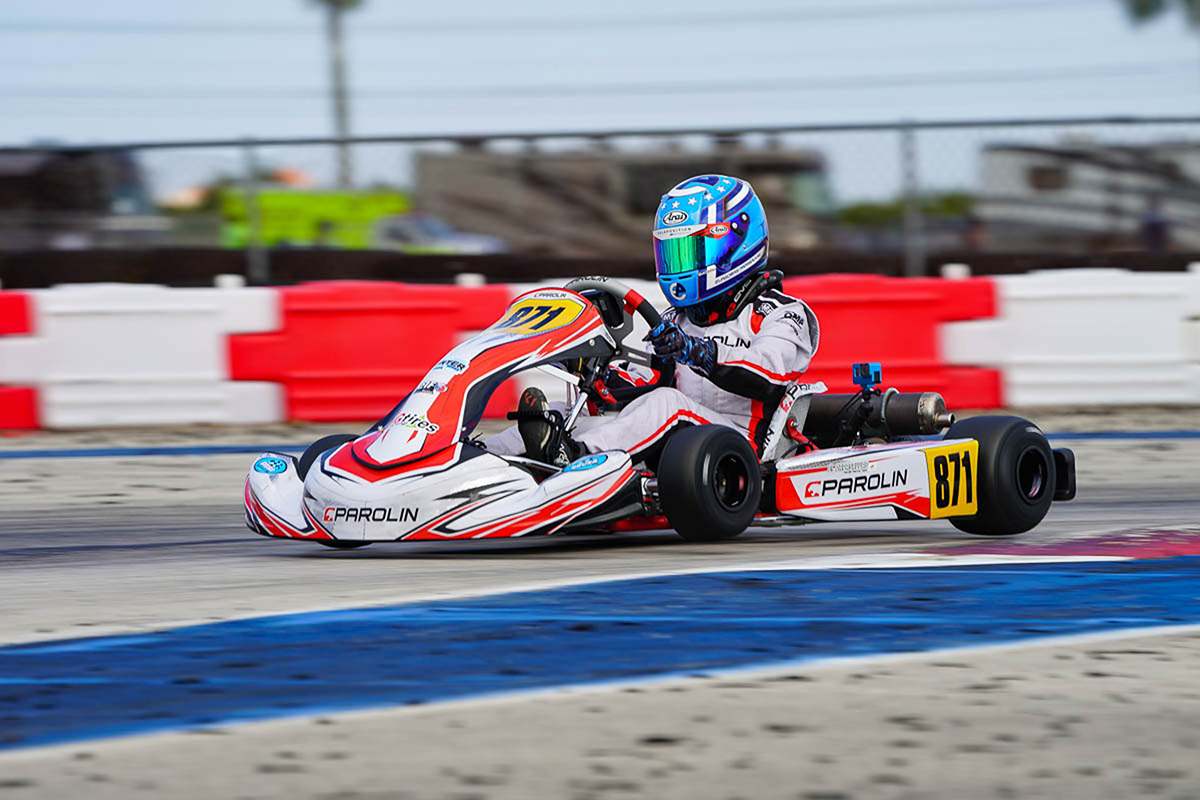 Evagoras Papasavvas did not have racing luck on his side this past weekend
at the SKUSA Winter Series opener in Homestead, Florida
(Photo: On Track Promotions)

It was a trying weekend for Evagoras Papasavvas at the opening round of the Superkarts! USA (SKUSA) Winter Series. Looking to start his 2021 season off with strong results at the AMR Motorplex in Homestead, Florida, Papasavvas showed speed in his Parolin USA prepared KA100 Junior kart but racing luck would not be on his side. Gaining multiple positions in both Saturday and Sunday’s main events, overall weekend results were interrupted by prefinal incidents.

With several practice days leading up to the event weekend, Evagoras Papasavvas and his Parolin USA team fine-tuned his equipment to extract the necessary speed to run in the lead pack. Working not only on chassis and engine setup, Evagoras came to grips with the characteristics of the tricky AMR Motorplex and by the time round one would come on Saturday, hopes were high.

“Qualifying was ok but we were hoping for more,” explained Evagoras, who clocked the eighth fastest lap time of the twenty-two KA100 Junior drivers. “The prefinal was going well as I was able to move from eighth to third in the opening laps and maintained my position in the top-five. Unfortunately, on the final corner of the last lap I was shoved wide and into the barriers. I was unable to continue and would eventually be classified in P18.”

With a kart that needed extensive repair work before the day’s main event, Parolin USA went to work. Making the grid on time and starting from the outside of row nine, Evagoras had a spirited drive forward and crossed the stripe in tenth despite an ill handling kart from his prefinal incident. When the dust had settled and the results were official, the Parolin USA driver relegated back to 14th after a post-race push back bumper penalty.

Returning to the track on Sunday morning for round two of the SKUSA Winter Series, Evagoras started his day on a high claiming the third fastest lap time in the one and only practice session. An 11th place qualifying effort brought disappointment in the prefinal as another incident forced him to the sidelines after only four laps. Lining up P18 for the start of the final, Evagoras drove forward running just outside the top-ten and eventually earning a 13th place finish.

Evagoras continued, “Not the way I wanted to start the season, but we will be back in February for rounds three and four and two more shots to be at the front of the field. A big congratulations to my Parolin USA teammates for some impressive drives and strong results.”