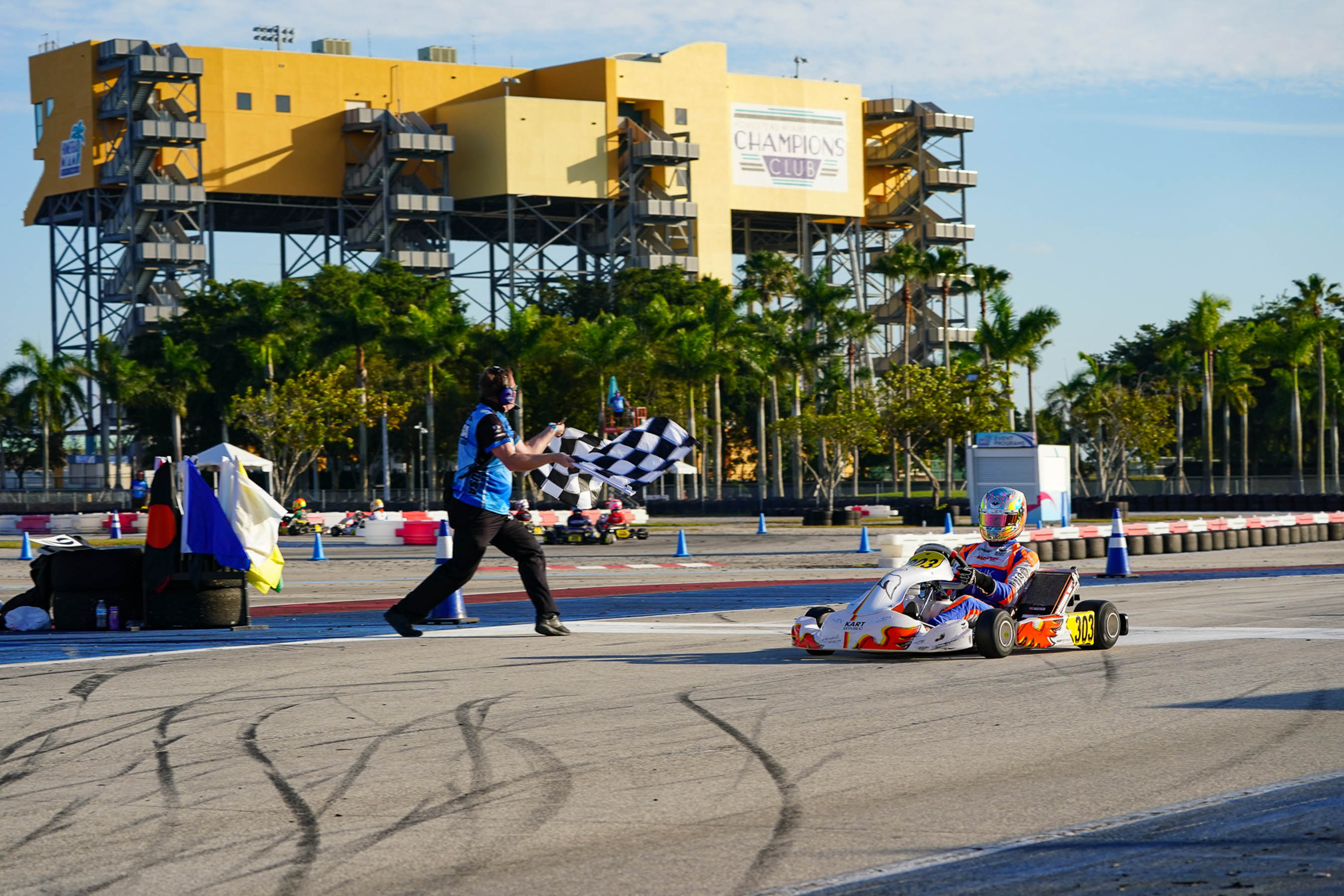 Arias Deukmedjian was able to pull off the double with wins in X30 Senior and KA100 Senior (Photo: On Track Promotions - otp.ca) 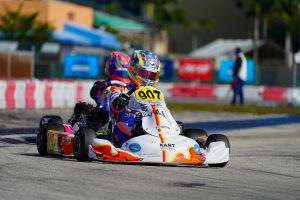 The second round of the Superkarts! USA Winter Series was run on Sunday under warm temperatures and sunny skies at AMR Homestead-Miami Motorplex in South Florida, and the on-track excitement was high with tremendous racing in virtually every category. Arias Deukmedjian (Kart Republic) further cemented his place as an elite driver in the sport, winning both the X30 Senior and KA100 main events. Jeremy Fletcher was not to be denied in X30 Junior, while Brent Crews scored his second win in the Pro Shifter class. The event logged just over 200 entries and served as the kickoff of the 2021 Superkarts! USA national calendar.

As expected, the Rolison Performance Group X30 Senior drivers delivered yet another edge-of-your-seat showdown on Sunday. Team Montoya’s Sebastian Montoya (Tony Kart) turned up the wick for Round 2, qualifying on pole and then maintaining that lead pace through to the Prefinal win. Montoya swapped the lead of the Prefinal with Ryan Perry Motorsports’ Max Opalski (Tony Kart), who qualified P2 and then finished second in the Prefinal as well after leading a handful of laps mid-race. In the main, Montoya led the opening two laps before two-time defending series champion Ryan Norberg (Kosmic), Mathias Ramirez (Redspeed) and Opalski slipped through in Turn 2. Ramirez was on the move and passed Norberg for the lead and then paced the next 10 laps.  Rookie senior Alex Stanfield was also putting on a show mid-race, pushing his Crosslink Competition Exprit past Norberg for third. Duekmedjian started his charge on lap 12, when he passed Norberg for fourth. The Kart Republic driver displaced Stanfield of third on lap 14. 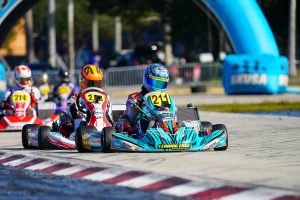 Saturday winner Aaron Benoit (Tony Kart) was in lead pack all day and showed his speed in the main, getting by Ramirez for the lead on lap 14. Even with Benoit’s pace, Deukmedjian would not be denied as he passed Ramirez for second on lap 17 to set up his drive for the win on the final circuit. Deukmedjian arrived on the scene of the final lap and passed for the lead in turn one, holding off Benoit on the final circuit for his second win of the day. Benoit was second, while Stanfield threw everything at Ramirez on the final lap to complete a tremendous Senior debut weekend with a fourth to pair with his 10th from Saturday. Opalski wrapped the top-five while Norberg finished sixth.

Brent Crews (Formula K) and Adam Isambard (Parolin) re-fired their battle at the front of the PSL Karting Pro Shifter class, splitting the qualifying and Prefinal honors. Crews posted the quickest lap in qualifying, and then Isambard took the Prefinal handily. In the 22-lap main, Crews grabbed the holeshot and held the position through the remainder of the race. Isambard pressured the shifter rookie relentlessly over the final laps but came up just short at the line. PSL Karting’s Davide Greco (Birel ART) and Devon Smith-Harden (CKR) ran nose-to-tail for the entire race, with Greco holding third for the entire race. Baylor Griffin (Magik) capped the top-five. 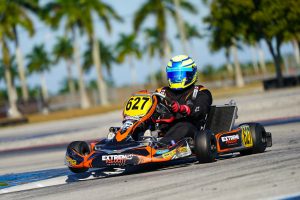 Freddy Rhemrev came out of Sunday as the winner in Master Shifter (Photo: On Track Promotion – otp.ca)

In Master Shifter, Bermuda’s Scott Barnes (Intrepid) got the holeshot at the green flag and held rival Freddy Rhemrev (CRG) at bay for the first nine laps before a loose rear gear put him on the sidelines. Rhemrev assumed the lead and cruised to the win unchallenged. Ken Schilling (Aluminos) finished second while Amr Sinada (Magik) completed the podium.

Cameron Weinberg (Tony Kart) topped the chart in Speed Concepts X30 Junior qualifying, outpacing Jack Jeffers (Birel ART) and Leonardo Hassan (Tony Kart). Jeremy Fletcher (EOS) started ninth in the Prefinal but quickly drove to the front, taking the lead on lap seven, battling back and forth with Paul Bocuse (Redspeed). Fletcher took the Prefinal victory and then led the first 14 laps of the main before Bocuse again worked to the lead. Bocuse took control with eight to go and looked content to be in front of Fletcher with a plan to defend over the final laps. Both drivers showed impressive speed all weekend, but even with Bocuse successful holding off his challenger through the hairpins on the final circuit, Fletcher dove to the inside in the left-hand turn 10 to steam away the lead and the win in a thrilling final lap battle. Kai Sorensen (Parolin) worked hard to close in but just couldn’t get there and he had to settle for third ahead of Ayden Ingratta (Tony Kart) and Noah Baker (Tony Kart). 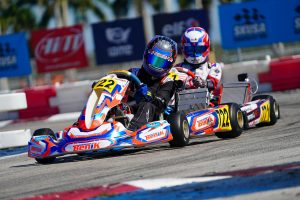 In Orsolon Racing X30 Master, reigning champion Renato Jader David (Tony Kart) swept the day to win his ninth straight SKUSA Winter Series main event. After winning the final three races of 2019 and all four races in 2020, David’s sweep of the weekend extended his streak to nine. David dominated qualifying and the Prefinal, but was in for a dogfight in the Final with Luiz Cordeiro (Tony Kart) and William Isaias (Tony Kart). David led the first nine laps, but Isaias attacked on lap 10 and moved to the point, changing the storyline. It was the first time all weekend that David did not have clean track in front of him. Cordeiro also slipped past for four laps, pushing David back to third. David eventually worked his way to the front and was not to be denied, holding off the final lap attack by Cordeiro for the win. Isaias finished the podium in third, while Glauber Granero (Tony Kart) and Diego Rodriguez (Exprit) finished fourth and fifth, respectively. 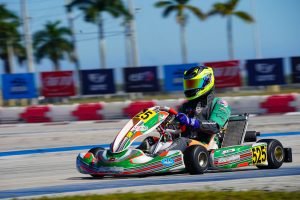 For the second day, the Haase Karts KA100 Senior class did not disappoint with the heavy hitters up front facing off in all three sessions. Rolison Performance Group’s Hannah Greenemeier (Kosmic) came up just short of the win on Saturday and started Sunday off with the fast time in qualifying. Round 1 winner Brandon Lemke (Merlin) was second quick, ahead of Nolan Allison (Kosmic). Greenemeier and Arias Deukmedjian (Kart Republic) swapped the lead in the Prefinal, with Greenemeier taking the win to maintain the pole for the main.  In the 22-lap Final, Deukmedjian took the lead from the opening lap before Greenemeier powered back through to lead on lap nine, as the duo was hounded by Lemke and Crosslink Competition’s Reilly Cann. Deukmedjian retook the point on lap 12 and held Greenemeier at bay for the final 10 circuits to take the win. Cann turned in a stellar performance in overtaking Lemke for third. Thomas Annunziata completed the top-five. 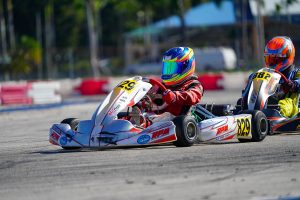 After qualifying was completed for the Piquet Sports KA100 Junior class, one would have expected that Jesus Vasquez Jr (Birel ART) would have been a factor all day. The Californian topped the timed session ahead of Parker DeLong (Tony Kart) and Chase Hand (Kosmic), but he was the first driver out of the Prefinal after contact and would need to put on a show in the Final. In Vasquez’ absence, DeLong scored the Prefinal win over Texan Cole Kleck (Tony Kart) and Florida’s Collin Lloyd (Tony Kart). DeLong continued in the hunt for the lead in the main event, but over the final laps, it was Sebastian Wheldon (Kosmic) who rose to the forefront to score the on-track win. The victory would be short-lived as a pushback bumper penalty added three seconds and dropped him to sixth after a stellar performance. DeLong finished second on-track and was elevated to the victory. Christian Miles (Race Factory) dialed in his pace all weekend and was in the lead fight, finishing second, while Hand backed up a strong overall performance on Saturday to score his second podium of the weekend in third. Kleck took fourth, while Vasquez was a machine working back through the field from last to take fifth. 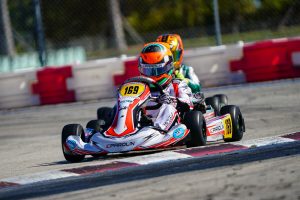 The Nitro Kart Mini Swift class was all about Matias Orjuela (Parolin). The 2019 SKUSA Winter Series Micro Swift champion won on Saturday and swept all three of Sunday’s sessions. Orjuela just nipped Enzo Vidmontiene (Benik) and Salvador della Vecchia (Parolin) in qualifying and then drove back to the front in the Prefinal after falling to fourth on the opening lap. In the 20-lap final, Orjuela led flag-to-flag to take a commanding lead in the points race. Vidmontiene scored his second straight runner-up finish, while Sebastian Garzon (Tony Kart) completed the podium. Oliver Wheldon (Kosmic) and Ava Hanssen (Merlin) finished fourth and fifth. 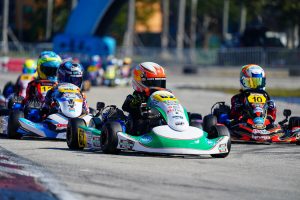 Keelan Harvick backed up his first SKUSA win on Saturday with a second on Sunday in Micro Swift (Photo: EKN)

Max Cristea (Magik) was the hot driver in DNJ Intermodel Services Micro Swift on Sunday, qualifying on the pole over Augustus Toniolo (Kosmic). Cristea kept the ball rolling in the Prefinal as he worked within a lead four-kart pack that included Toniolo, Saturday winner Keelan Harvick (Nitro Kart), and Gianmatteo Rousseau (Nitro Kart), eventually taking the win to maintain the pole for the 20-lap Final.  In the main, Cristea led the opening lap before Harvick moved to the front, as the son of NASCAR Cup star Kevin Harvick showed throughout the weekend that he really likes to lead. Harvick paced five laps before Cristea again moved to the point. Harvick then took control of the race lead just past the halfway point and maintained a slight cushion to score his second win of the weekend, going back-to-back in his SKUSA debut. Toniolo came on strong in the late going as he tried to chase down the leader, finishing second by just 0.234 seconds at the checker. Alessandro Truchot (Parolin) completed the podium in third, ahead of Ethan Tovo (Nitro Kart). Cristea capped his solid day with a fifth in the final classification.

The Superkarts! USA crew and its competitors will return to Homestead on the February 12-14 weekend for Rounds 3 and 4 to decide this year’s champions.