Fourth year of program kicks off in Florida

This weekend – January 8-10 – we will attempt to put away 2020 as we begin the 2021 racing calendar with the launch of the Superkarts! USA Winter Series. The ‘Spring Training’ program begins its fourth season with the opening two rounds at the AMR Homestead-Miami Motorplex presented by MG Tires. Racers and teams will use this weekend to begin the process of setting up their 2021 programs, with those moving to new homes and chassis brands, others graduating up or moving to another category for the new season. All of that begins with the opening weekend of the SKUSA Winter Series around the 7/10-mile AMR circuit in the clockwise direction, welcoming nearly 200 entries in the nine categories. 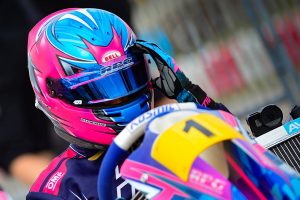 Wednesday and Thursday were unofficial practice with Friday hosting six official sessions for testing. Round 1 is set for Saturday, including qualifying, Prefinal and Final. Round 2 is a repeat format on Sunday.

eKartingNews.com is set for the opening event of its 2021 Trackside Live program. The voice of Superkarts! USA, EKN’s own Rob Howden, will be calling the action all weekend. Those unable to attend can listen in to the live broadcast – presented this weekend by Acceleration Kart Racing, Alan Rudolph Racing Academy, and Leading Edge Motorsports. Bookmark www.ekartingnews.com/live and follow the EKN social media channels for more throughout the weekend in Florida.

40 drivers are set to battle in the headline X30 Senior division, all chasing the two-time defending series champion Ryan Norberg. The Rolison Performance Group / Kosmic driver secured the title in his debut with the team in 2019, and came back to defend the crown with out winning a main event in 2020. This will be his first race in four years not carrying the SKUSA #1 plate, losing the SKUSA Pro Tour title after a four-year championship run. Holding that plate is RPG teammate Bryson Morris, with the 2020 SKUSA Pro Tour title winner making his first race since that August weekend after being sidelined with a rib injury. Another #1 will be in the field with EKN TaG Driver Rankings co-#1 Arias Deukmedjian (KSNA / Kart Republic), a winner at the series finale last year. The only other winner in the field is RPG driver Hannah Greenemeier, the only female driver to win in the category. 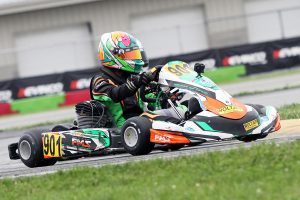 Brandon Lemke is among the top contenders entering the weekend in KA100 Senior (Photo: EKN)

The KA100 Senior division had just four total drivers racing in the series in 2019. Two years later, the category now welcomes 27 drivers for the opening two rounds in 2021. Defending series champion Nathaniel Cicero (RPG / Kosmic) is moving to X30 Senior for 2021, opening the door for a new title winner. At the top of the order is 2020 runner-up Connor Ferris (TFR / Kart Republic) as the top returning driver. Former SKUSA Pro Tour champion Brandon Lemke (FMS / Merlin) is focusing on just KA100 for the weekend, pinned as a major threat to contend for victory. A handful of drivers are doing double duty, including Deukmedjian, Greenemeier, Annunziata, and California driver Nick Ramirez (Nash / EOS). 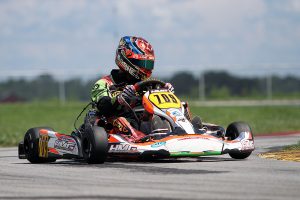 The Pro Shifter division is missing many of the big hitters in the shifterkart ranks with just seven drivers set to battle. The story for the category is the debut of 12-year-old Brent Crews moving up to the shifterkart ranks with Leading Edge Motorsports / Formula K. SKUSA allowed the two-time IAME International Final Cadet champion a license to compete in the category. Baylor Griffin (Orsolon / CRG) and Alan Isambard (Parolin USA) are the only drivers returning from last year’s program after winning a main event in Pro Shifter 2. Canadian Davide Greco (PSL / Birel ART) is making his series debut, along with Pierce Baldus (LEM / Formula K) and Annie Rhule (Checkered / Magik). Another thing to watch is the implementation of the pushback bumper for the shifterkart categories in 2021.

Master Shifter has five drivers competing on the weekend. Scott Barnes (Intrepid) is the leading contending in the category, coming in as the defending SKUSA Pro Tour G1 champion. Bryan Smith (SBH / CKR) could be the leading contender for Barnes.

Defending X30 Master champion Renato Jader-David (Orsolon / Tony Kart) will attempt to continue his win streak at the SKUSA Winter Series. RJD won all four races in 2020, and the final three in 2019 to hold seven straight going into this weekend. The majority of the six driver field is from Florida, including 2020 Ignite Master champion Dan Breitenstein (Rysa / Birel ART) making the move up at his home track. 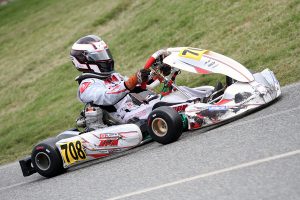 Alex Berg is among the veteran Junior drivers in X30 (Photo: EKN)

The KA100 Junior division could be breakout seasons for those returning to the category, with 22 drivers filling the field. Christian Miles is one of the top returning drivers, moving to Smith Brothers Racing aboard the Race Factory chassis. Austin Jurs (FMS / Redspeed) and Jesus Vasquez Jr (PSL / CL) is among the more experienced in the field. A number of drivers will pull off the double duty, including Brinkman, DeLong, Wheldon, Ava Dobson (FMS / Merlin), Danny Dyszelski (RPM / Kosmic), Cole Kleck (Arcane / Tony Kart), and Jake Walker (MDR / Kosmic). G3 Argyros (Speed Factory / Redspeed) and Evagoras Papasavvas (Parolin USA) are among those making their Junior debut. 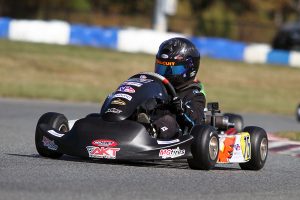 Isaac Malcuit enters the weekend with momentum to be among contenders in Micro Swift (Photo: EKN)

A number of new names may appear at the top of the Mini Swift category on the weekend with a majority of the front runners graduating to the Junior ranks, including defending champion Max Garcia. Of those returning, Matias Orjuela (Parolin USA) and Enzo Vidmontiene (Benik) lead the way. The focus will be on the many Micro drivers graduating to the Mini ranks. 2020 SKUSA Winter Series champion Oliver Wheldon (JC / Kosmic), Kai Johnson (AKT / Energy), SKUSA Pro Tour winners Carson Weinberg (Nitro Kart) and Asher Ochstein (Benik), along with 2020 standouts Cade Jaeger (Nitro Kart) and Vivek Kanthan (MDR / Kosmic).

The graduation of many from the Micro Swift division leave a void for new names to stand out in the 28-driver field. Leading the way as a favorite is Isaac Malcuit (AKT / Kart Republic), who is coming off two wins at the WKA Daytona KartWeek. Max Cristea (Magik), Keelan Harvick (Nitro Kart), Ashton Woon (Nitro Kart) and Tristan Murphy (Nitro) are among the notables in the field that could be competing for wins and podiums.