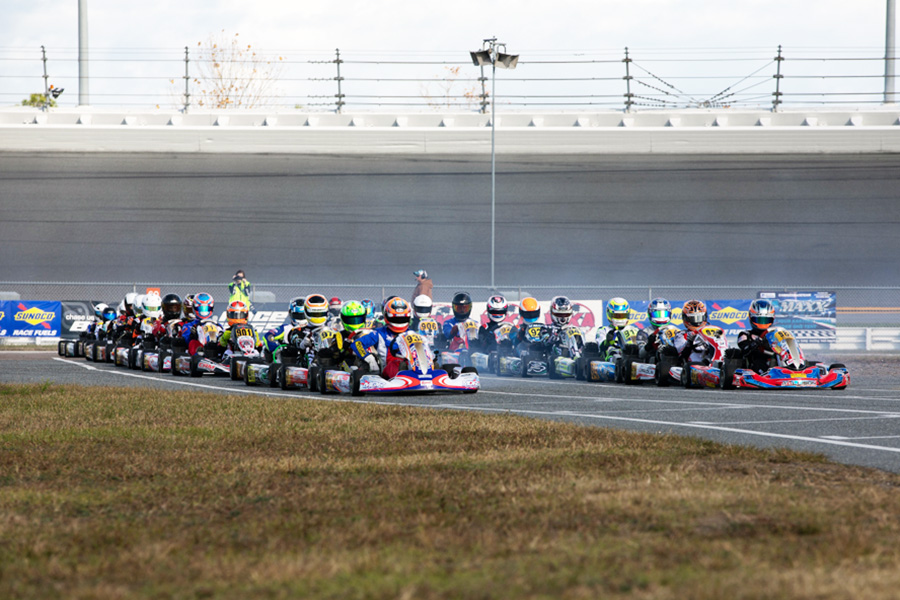 The World Karting Association reached the halfway point of its 2020 Daytona KartWeek yesterday. The annual event at the Daytona International Speedway hosted Day 2 of racing action in Daytona Beach, Florida on Tuesday. Another sunny but windy day greeted the competitors in Briggs 206, F100, and ROK competition, with categories either completing what they started on Monday or racing a new round. Former Daytona winners added to their total inside the high-banks, while others grabbed their first career victories at DIS.

The first class in the order but the last race to host a main event was the Briggs 206 Cadet division. The class was first run at Daytona in 2018, with Ben Maier one of the two winners that weekend. Maier set the pace in qualifying with a 47.179-lap, edging out fellow Nitro Kart drivers Aryton Grim and Keelan Harvick, son of NASCAR driver Kevin Harvick. The category ran a heat race and a Prefinal, with Maier at the point when the checkered flag waved in both. Maier led all 10 laps in the heat race, and nine of 10 in the Prefinal with Harvick stealing the spot for one circuit. Maier went wire-to-wire in the 14-lap main event, securing his fifth career victory at Daytona. Cade Jaeger made it a Nitro Kart 1-2, winning the battle over Ragan Saville for second with Harvick in fourth and Cody Lindstrom in fifth. 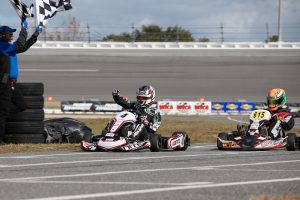 Luca Mars won Round Two of the Dash at Daytona in Ignite Senior (Photo: BH Perception)

Jed Perkins nearly came away with a victory in the opening round for the Ignite Senior category and the Florida driver made sure he was in the hunt again with fast time in qualifying for Tuesday. Perkins posted a 48.470-lap to secure P1 in the session over Monday winner Gavin Bayliff from Trinity Karting Group with A-Maxx Racing’s Adam Maxwell in third. Fourth was Monday runner-up Luca Mars, making his Ignite debut. Mars jumped out to the lead by lap two of the Prefinal with Perkins as the lead challenger. Perkins took back the position for three laps before Mars reclaimed the spot and went on to win. Mars was able to get away early in the 18-lap Final, but it was Perkins in chase mode. Perkins was able to run down Mars with fast laps of the race and fight for the victory on the final circuit. At the line, Mars scored the victory by 76 thousandths over Perkins. Pauly Massimino finished third for a second time on the weekend with 2020 FIA Academy Trophy champion Connor Zilisch in fourth and Bayliff in fifth.

The Kid Kart division began on Monday with qualifying and the opening heat race. The class resumed on Tuesday with Heat #2 before hosting their main event later in the day. Nolan Goulart was the driver to lead at the end of the heat race, but a penalty dropped him to sixth in the order, moving Heat 1 winner Camdon Clay up to the top spot. Starting from the pole position, Clay led wire-to-wire for a three-second victory in the 10-lap Final. Elam Stoner won the battle for second over Austin Taylor. Goulart drove to fourth with Isaac Carvalho in fifth. 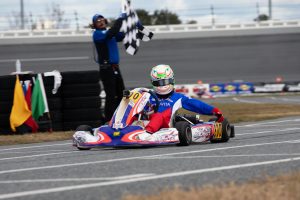 The F100 Junior class hosted qualifying and two heat races on Monday with a different driver at the top of the results sheet. One of them was Danny Dyszelski as the North Carolina driver came out of the Prefinal with the win. Heat #2 winner Leonardo Colavita led all 18 laps but was penalized for jumping the start, dropping him to second with Dyzelski earning the win. Colavita responded in the Final with a flawless performance, with the Italian now living in New York jumping out to the lead on the opening circuit. He then led all 22 laps, recording the fast lap of the race, to win in his WKA Daytona KartWeek debut. The fight was behind him for second with James Overbeck securing the spot ahead of Jake Walker. Top qualifier Miles Murray was fourth with Dyszelski in fifth. 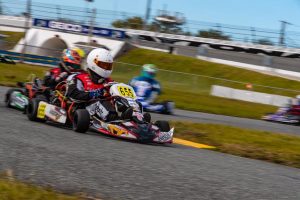 James Perkins made it 2 for 2 in Ignite Masters (Photo: Mark Schwigen)

The Ignite Masters category completed a second round of racing on Tuesday, but the results were similar to that of Monday. Day 1 winner James Perkins was able to sweep the action for Round Two on Day Two. The Florida driver set fast time in qualifying with a 49.00-lap, clearing the field by three tenths. Perkins went unchallenged in the Prefinal, leading all 14 laps before his wire-to-wire performance in the 18-lap Final. Phil Pignataro drove to the second spot with Jeff Jewell joining them on the podium. Stuart McAleer was fifth with Tim Hannen completing the top-five.

After sweeping the action for the first half of the program on Day 1, Brandon Jarsocrak completed the sweep on Tuesday in the F100 Senior division. Jarsocrak went unchallenged in the two heat races on Monday and put in the same performances for the Prefinal and Final. Jarsocrak led all 18 laps of the Prefinal and then the 22 laps in the Final for a 3.5-second victory. Pauly Massimino drove second to Jarsocrak all weekend, making it a Mike Doty Racing 1-2. Thomas Annunziata joined them on the podium in third with Connor Zilisch fourth in his Senior debut with Chase Jones fifth. 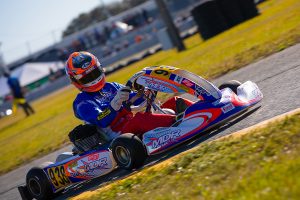 The ROK Junior category completed its one-day round of racing on Tuesday with five talented drivers in the field. Parker DeLong set fast time in qualifying in his Junior debut weekend, edging out Jeremy Fletcher by 25 thousandths with a 41.648. Danny Dyszelski was only 27 thousandths off DeLong’s time. DeLong led all 14 laps of the Prefinal for the win with Dyszelski moving up to second ahead of Fletcher. It looked to be a sweep for DeLong, leading the majority of the 18-lap Final. On that 18th lap, Dyszelski was able to work past DeLong in a photo finish, winning by 53 thousandths. Fletcher finished third with Julian DaCosta fourth and Camryn Reed fifth.