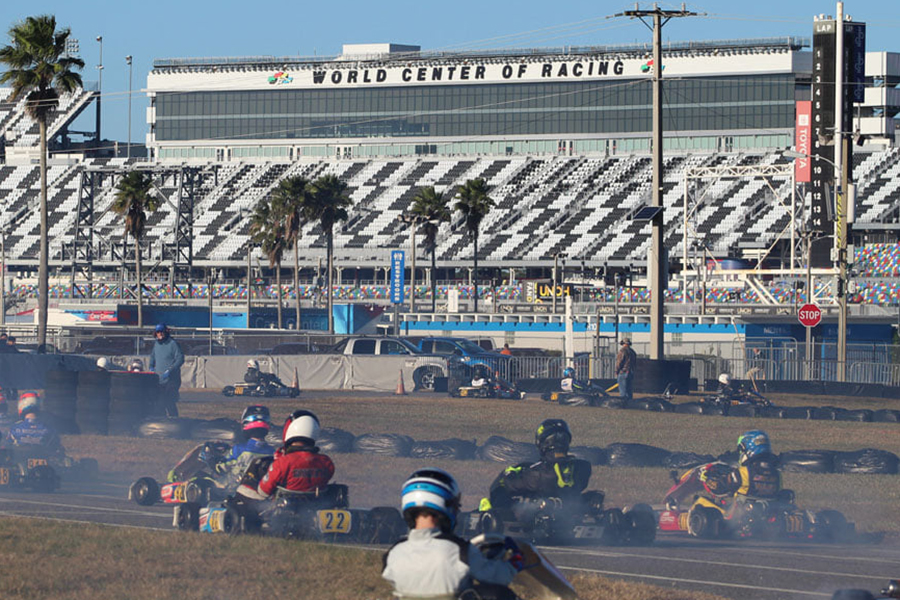 The opening day of racing was completed on Monday for the World Karting Association Daytona KartWeek. The event inside the Daytona International Speedway marks the opening round for the 2021 Manufacturers Cup Series season. Sunny but windy conditions greeted the over 170 entries for the opening day of competition. This year’s event format features three full days of racing, with each category following a different format. Mini ROK, Micro ROK and Ignite Junior completed their one-day structure, while F100 Senior, F100 Junior and Kid Kart reached the halfway point of their two-day program. The Margay Ignite Senior and Masters crowned the first winners of their two round schedule in Daytona.

The first class on the order was the 17 kart field for the Mini ROK division, completing their full day of competition on Monday. Christian Quijano was able to edge out Jensen Burnett for the top spot in the qualifying session with a 45.162, quicker by only 19 thousandths. Burnett led the first six laps of the Prefinal before Quijano retook the top spot, going on to take the win. Moving his way forward was Ben Maier, as the Nitro Kart driver qualified ninth and moved up to fourth in the Prefinal. After a wild opening lap, Maier came out leading on lap two. Quijano sat behind and waited until late in the race to make his move for the lead. Quijano and Maier fought for the victory on the final lap, going down to a photo finish. At the line, Maier secured the victory by 77 thousandths over Quijano. Aryton Grim completed the podium, winning the battle for third ahead of Karsyn Walters and Burnett. 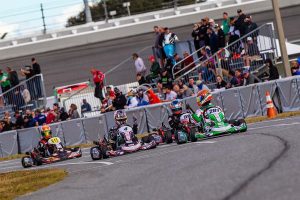 Gavin Bayliff secured the victory in the opening round for Ignite Senior (Photo: Mark Schwigen)

The 33-kart field for Ignite Senior completed the first day of full action. Florida driver Jed Perkins set quick time in qualifying (48.663) with the top four separated by only 85 thousandths, including a slew of 2-cycle regulars in Pauly Massimino, Luca Mars and Adam Maxwell. Mars ended up as the top challenger, taking the lead for two laps but it was all Perkins in the 14-lap Prefinal. Perkins was shuffled back early in the main event with Massimino taking the lead early. Mars also led before the halfway point of the 18-lap Final before Perkins returned to the point. He led five laps until a line led by Gavin Bayliff pushed past for position. He and Mars were able to run away in the closing laps for a 1-2 finish by the Trinity Karting Group drivers. Massimino completed the podium with Perkins fourth and his father James Perkins fifth ahead of IndyCar’s Santino Ferrucci and FIA Academy Trophy champion Connor Zilisch.

F100 Junior: Multiple Drivers at the Point for Opening Day

The F100 Junior category completed the first day of their two-day format on Monday with three different drivers at the top of the results sheet. Miles Murray was able to post the quick time in qualifying (42.735), edging out Danny Dyszelski by 42 thousandths. Murray led the opening five laps of the 14-lap opening heat race before Dyszelski took control, leading the remainder of the race for the win. Murray fell back to fifth as Leonardo Colavita ran second. It was Colavita that ended the day on top, winning Heat #2. Dyszelski led the first three circuits before Colavita took the spot, leading 11 laps for the win. Parker DeLong, making his Junior debut, finished third in each heat while Murray improved one spot to fourth in the second moto. The Prefinal and Final are ahead on Tuesday for the category.

Isaac Malcuit is becoming a familiar name at the top of the Micro division, sweeping the action on Monday. Malcuit cleared the Micro ROK field by two tenths of a second with a 46.032 lap. He led all 10 laps of the Prefinal to win by over five-seconds and then showed the way in the 14-lap Final for his first Daytona victory. JJ O’Neil recorded the fast lap of the race to finish second ahead of Max Cristea. Former Daytona winner Caleb Tarter was fourth with Keelan Harvick, son of NASCAR’s Kevin Harvick, placing fifth in his Daytona KartWeek debut. 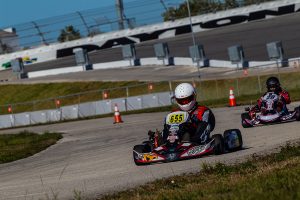 It was a near perfect day for veteran Margay driver James Perkins in the opening round for the Ignite Masters class. Perkins set fast time in qualifying (49.180), edging out fellow longtime Margay driver Jeff Jewell by 82 thousandths. It was third place qualifier Scott Barnes from Bermuda that jumped out to the lead in the Prefinal. He led three laps before Perkins retook the spot and led the remainder of the race. Perkins went untouched in the 18-lap Final, establishing a 4.8-second advantage at the checkered flag to become the inaugural class winner at the WKA Daytona KartWeek. Barnes drove to second with Matt Krechel completing the podium in third. Jewell ended up fourth with Stuart McAleer in fifth.

The quickest driver in the 7-kart Kid Kart field is Camdon Clay. An issue in qualifying did not allow Clay to complete a full at-speed lap. This allowed Zion Dyer to secure the fast time in the session with a 59.327 lap. In Heat #1, Clay drove the tail of the field to the point, driving away to a 12-second advantage after eight laps. Dyer fell to fourth with Elam Stoner in second and Austin Taylor in third. The class will close out the event with Heat #2 and the Final on Tuesday.

The F100 Senior class has 34 total drivers, trying to dethrone Brandon Jarsocrak from the top after his victory in the category last year. Jarsocrak however is going to be tough to beat, opening up the two-day program with a perfect run. The ‘Shillington Slingshot’ cleared the field in qualifying by two tenths with a 42.647 lap time. He led all 14 laps of Heat #1 and again in Heat #2, all ahead of Mike Doty Racing teammate Pauly Massimino. Senior rookie Alessandro de Tullio was third in the opening moto before fellow Senior rookie Connor Zilisch advanced to the position in the second heat. The Prefinal and Final are ahead on Tuesday for the category. 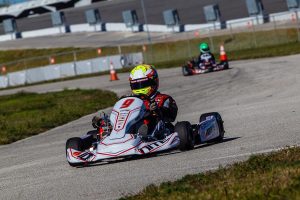 The Ignite Junior class made its debut at the WKA Daytona KartWeek on Monday, won by Reid Sweeney. It was a near sweep for Sweeney, setting fast time in qualifying (50.219) before leading all 14 laps in the Prefinal. A two-position penalty for two wheels outside the tram line at the start took the win away, and put him third on the grid for the Final, handing Parker DeLong the win. DeLong led the opening five laps until Sweeney took back the position. He led the remainder of the 18-lap race to earn the victory. DeLong and Christian Weir completed the podium with Miles Doherty fourth and Ethan Goulart fifth.

Action returns on Tuesday inside the Daytona International Speedway for the WKA Daytona KartWeek. The Ignite Senior and Ignite Masters returns for a second full day of action while F100 Junior, F100 Senior and Kid Kart complete their two-day program. Briggs 206 Cadet, and ROK Junior join the class roster for their one day of competition inside the World Center of Racing.