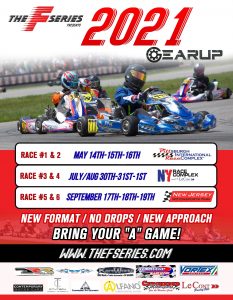 The 2021 season marks the 11th year for the F Series Gearup Challenge. The program battled through the COVID-19 pandemic in 2020, reducing from seven rounds of racing at four events to three events and six rounds total for the championships. The upcoming season for 2021 will be similar, with three events penned for the year.

“The coming season sees some changes at the Gearup Challenge, three venues are set to make up the 2021 competition year,” stated Marco Oldhafer of the F Series. “With so many variables in our daily lives, we felt not overdoing it would be the safest way to ensure a fun and a highly competitive season. Visiting the biggest and most challenging circuits on offer in the Northeast will set the challenge apart from anything else in the region!”

The first round of the year will be hosted at the Pittsburgh International Race Complex will offer a great starting point for the west and eastern based racers, opening the year in May. NY Race Complex is set for the second venue at the end of July start of August, and as many know, this location has combined many top Canadian racers to join the action over the past three years. The final rounds have traditionally been held at New Jersey Motorsports Park and no surprise, it will again in 2021. The September event will crown the season champions.

Oldhafer added, “The stage is set, and the dates have been determined. The Gearup Challenge has become known as an incredibly tough championship to win, 2021 will be tougher than ever. The rest is up to you!”

Classes for the F Series Gearup Challenge are listed on the series website. The 100cc and Briggs classes will again be included as invitational classes at specific venues. Season passes and special all-inclusive deals will be available shortly. Head to www.thefseries.com.