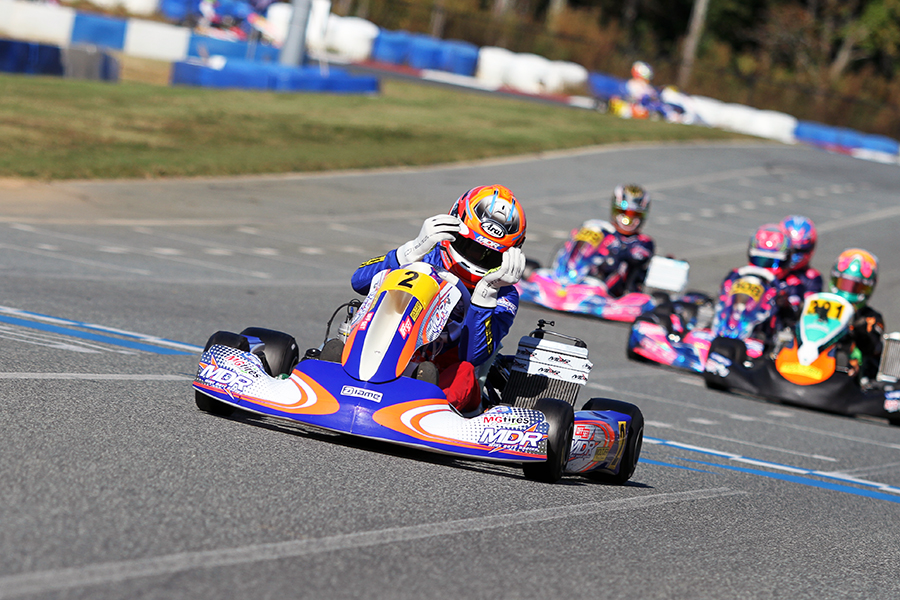 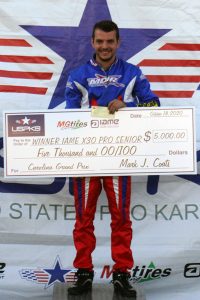 Jarsocrak took home two of the three top money prizes on the USPKS season, taking home a total of $12,500 for 2020 (Photo: EKN)

The last five years of karting here in the United States have brought about a few drivers who have stood out among the rest. One of them is Brandon Jarsocrak. A multi-time podium finisher in the championship chase on the Superkarts! USA Pro Tour, the ‘Shillington Slingshot’ secured his fourth straight championship at the United States Pro Kart Series in the X30 Pro category, earning the EKN Driver of the Month for October.

Since the launch of the USPKS program in 2013, the Pro division has been the headline category seeing average numbers around 30 drivers per event. The class began with the IAME Leopard powerplant and moved to the X30 engine in 2016. Those opening four years saw four different drivers claim the series championship – Kyle Kalish (2013), AJ Myers (2014), Elliot Finlayson (2015), and Brandon Lemke (2016). The 2017 season was the first title for Jarsocrak at USPKS and began a three-year run heading into 2020.

The 2020 season was unlike no other, thanks to the COVID-19 pandemic. The start to the USPKS program was delayed from March until July, when the series opened at the scheduled series final at New Castle. The second event was then moved to Road America in September on Labor Day weekend, with the finale put to October at the GoPro Motorplex.

Jarsocrak went winless at the New Castle event against the 41-driver field but came out as the championship leader over Mike Doty Racing teammate Pauly Massimino with two podium finishes. Adding in two more podium finishes at Road America, Brandon continued as the point leader heading into the finale, yet without a win after four rounds of racing.

Thirty-eight drivers lined up on the October 16-18 weekend at the GoPro Motorplex for the 2020 USPKS finale event. The only session Jarsocrak missed the #1 spot was qualifying both days. Aside from that, it was a perfect championship weekend for ‘Money’. Four-time SKUSA Pro Tour champion Ryan Norberg set fast time for Round Five action on Saturday, with Jarsocrak a tenth off in fourth. Eventually, Jarsocrak was able to work up to the top spot, working past Norberg with three laps to go in the Prefinal. Starting the main event from the pole position, the three-time defending series champion led all 24 laps for his first victory of 2020. The victory extended his point lead over Massimino, who finished seventh.

The championship lead was now 148 points going into the sixth and final round on Sunday, with a maximum of 295 points up for a driver to gain. Jarsocrak grabbed 285 of them. 2016 title winner Brandon Lemke was the one to break up the perfect day for Jarsocrak, stealing the fast time in qualifying. Jarsocrak was third in the session and made a quick transition to the front in the Prefinal, leading after three laps. He showed the way for the remainder of the race for the win. Starting on the pole position was again in the main event, Jarsocrak led the opening 13 laps of the 24 until Hannah Greenemeier helped lead a group to his bumper. She led for one lap until he took back the point and the battle for second began. Branyon Tiner assumed that position as the driver on the move. Tiner took the lead on the penultimate lap and after receiving the white flag, Jarsocrak took back the top spot going into turn one. Jarsocrak defended the position through the hairpin and the double rights, making his way to the checkered flag for the victory.

Jarsocrak secured his fourth straight USPKS championship by 262 points over Massimino with Norberg finishing the season third, Lemke fourth and Arias Deukmedjian in fifth. One of the cool aspects for Jarsocrak during this four-championship run period, he was in school at Penn State University. This spring, Brandon graduated from ‘Happy Valley’ with a mechanical engineering degree. As of right now, there are no confirmed racing plans for the 2021 season when speaking to him. As champion, he took the USPKS Winner’s Circle program which pays the entries and MG Tires for all four events on the 2021 calendar. The possible ‘Drive for Five’ could begin March 12-14 when the USPKS begins the 2021 season at the Ocala Gran Prix in Florida. The series will also move to four events for the first time since 2017. 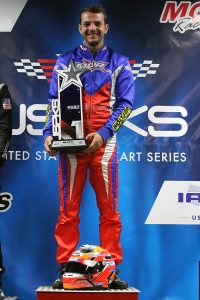 Chassis: Kosmic
Engine/Engine Builder: X30 from Woltjer Racing Engines
Sponsors: Mike Doty Racing, Woltjer Racing Engines, Offset
Series You Compete In: United States Pro Kart Series, Superkarts! USA Pro Tour, WKA Manufacturers Cup Series
Years Karting: 18
How did you get started in karting? My dad listed all the sports I could play when I was younger and I decided on racing. The next Christmas there was a kid kart sitting under the tree for me.
What has been the high point in your racing career? Winning the USPKS IAME Pro championship 4 years in a row and being able to go to the IAME International Finals to represent the USA.
What are your goals in racing? Have fun and one day own my own race team.
In a few words, how would you describe your driving style? Calm and consistent
Funniest moment at the race track? Too many to choose from. Every day in the Mike Doty Racing tent is funny.

What do you do when not at the track? Hangout with family/girlfriend/friends when I have free time. Most of my time is spent at the track coaching and being a mechanic for other drivers.
What are your goals outside of karting? Enjoy what I do and be successful at it.
What type of street car do you drive? Subaru WRX
What type of street car would you like to drive? BMW M3 or Nissan GTR
What are your pet peeves or things that irritate you? Dirty karts and blocking the entire race.
What do you think could be done to improve the sport of karting? Get all the series to work together to keep races close in location to keep the cost down for teams and drivers. Do not schedule races on top of each other. Support the local/club racing more.
What are your favorite aspects about the sport of karting? All the great people I have met over the years and all the cool places racing has taken me. I also like that it is a family sport that you can do with your entire family.