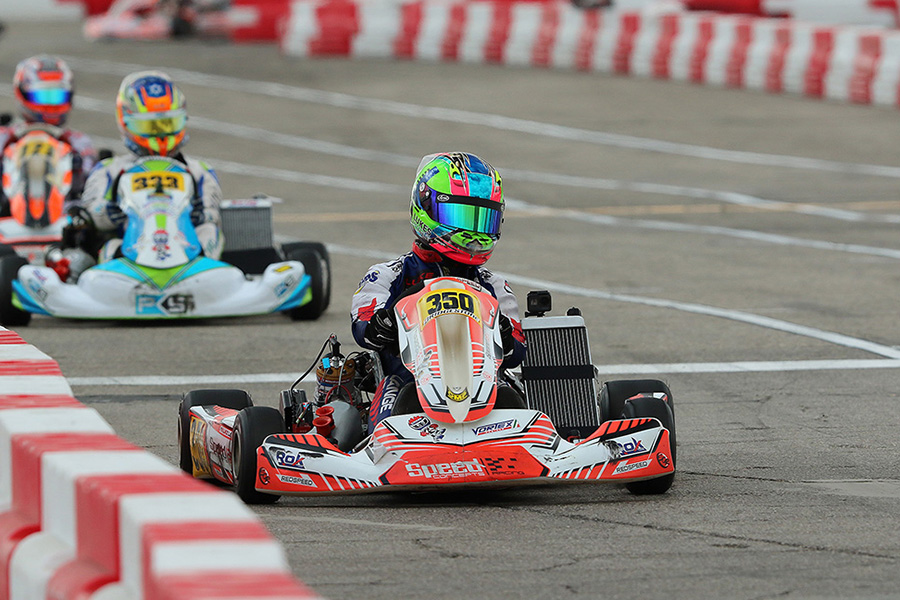 It was the annual trip to Las Vegas for Luke Lange as he took on the final ROK Cup USA event of the 2020 season. While rumors flew that the event would be cancelled, the ROK the RIO went off without a hitch and Lange bookended his weekend with a pair of impressive drives. After qualifying third overall out of a stacked field of drivers but forced to start the main event from the 28th position due to engine issues during the heat races, Lange was the biggest mover in the Senior ROK final advancing forward twenty-one positions to earn a seventh-place result.

“We had nothing but bad luck and issues in the four heat races,” explained Lange. “After qualifying third, I was hopeful of progressing through the heats and start Sunday’s main event in the top-five, but it just wasn’t meant to be. I could only imagine of what the outcome could have been if that was the case. At the end of the day we proved that we had the speed in the two most important on track sessions of the weekend.”

After qualifying third, the heat race finishes were not the ideal results for Luke Lange to have the chance to win the biggest karting event of the 2020 season. With engine issues that plagued solid heat race results, the Texan lined up for Championship Sunday outside row fourteen in the 28th position. Looking to stay out of trouble, gain positions and experience, Lange did more than that, driving to a top-ten result.

Lange continued, “I was able to get a good start and then start picking off drivers one by one. My times were comparable to the lead three but was forced to come through the pack. Finishing only nine seconds behind the winner in the seventh position, I have to feel that I lost the majority of that time on the opening lap in the thirty-kart strong field. A huge thank you to Allison Racing Engines for an engine on Sunday that helped me move up on the results sheet.”

Happy to have a great drive and end his 2020 season on a high, Lange will now look forward his 2021 campaign.

Luke Lange would like to thank his partners for their continued support. A huge thanks to LukesFastBreaks.org, America’s Auto Auction, Progressive Powersports, Strategic Dealer Services, Allison Racing Engines, and Speed Concepts Racing. Be sure to follow and stay tuned to the Luke Lange Racing social media pages for news, information, photos and results from future events.

For more information on Luke Lange, please visit him online at www.LukeLangeRacing.com or www.LukesFastBreaks.org or contact RTD Media & Management via email to Info@RaceTechDevelopment.com.