Miguel Mier and Team Crosslink are ROK the RIO Champions 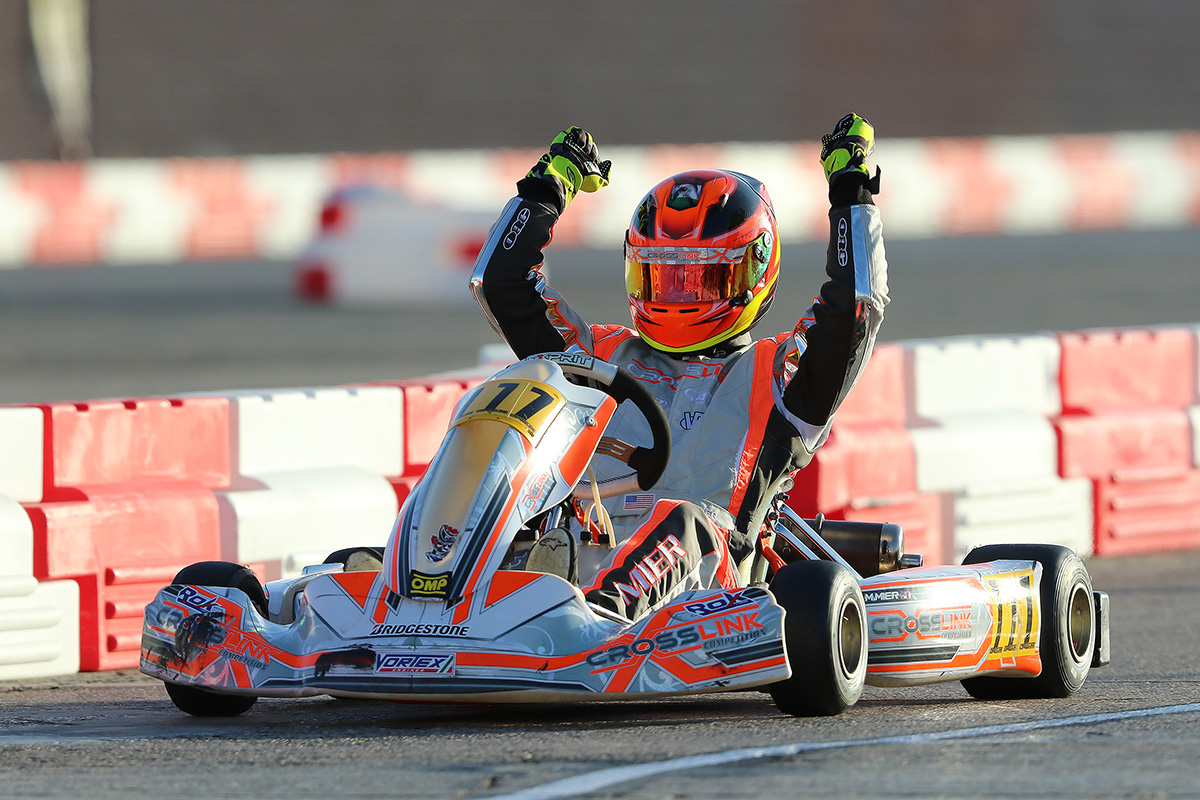 Miguel Mier rose to the top of the Master 100cc class to take the ROK the RIO title
(Photo: CKN)

With the goal of winning the ROK Cup USA ROK the RIO, Team Crosslink did just that this past weekend in Las Vegas. Miguel Mier waited until the final Master 100cc on track session of the weekend to rise to the top as he did in dramatic fashion to take the win. Fellow Team Crosslink driver Derek Wang added a podium result in ROK Master while Reilly Cann secured a top-five finish in Senior 100cc to cap off a great weekend in Sin City.

“The only thing better would have been two wins,” explained Sean Owens. “A huge congratulations to Miguel and the rest of the Team Crosslink program for a solid and successful event. Now we need to regroup and push harder than ever for 2021. Additionally, I would personally like to give all mechanics, engine builders, driver coaches, truck drivers, friends, family and supporters a huge thank you for their help and support, not only at the event, but throughout all of 2020. Thank you!”

Showing great speed in the main event to run down the leader, Mier turned fast lap after fast lap to close the gap and make his move for the win. Passing in the later stages of the race, the Team Crosslink driver drove uncontested to the win, his first ROK the RIO title.

Reilly Cann would be the first of the Team Crosslink drivers to hit the track and did so from the outside of row eight for the start of the main event. Elevating himself three positions throughout the twenty-lap final, Cann turned one of the fastest laps of the race to eventually finish in the fifth position. Christopher Martin started the main event from P32 on the grid and with his work cut out for him, gained twelve positions to end his day in 20th.

Working with Adam Johnson, Gage McNelis made huge strides this weekend in the Mini ROK class. In the talent filled field, McNelis gained fifteen positions in Sunday’s final to score a 19th place result in his first career ROK the RIO event. Paxton Dyson also competed in his first ROK the RIO event in Micro ROK and though the results do not reflect the experience gained, Paxton learned a ton in his first Las Vegas event.

After being taken out in the first corner and falling to a distant 31st, Ryan Shehan had a spirited drive forward to finish in the 17th position. After qualifying in the fifth position, Shehan proved that he can mix it up with some of the best Senior ROK drivers in the country.

Owens added, “Ryan qualified well and then had a bad first heat result and with the progressive heat format, it unraveled from there. He did a great job in trying to work his way forward and likely would have scored a top-ten result if it wasn’t for first lap contact that sent him spinning and backwards in the first corner.”

It was a pair of Team Crosslink drivers in the top-five in Master ROK and one on the podium as Derek Wang secured the third position. Battling in the front five all weekend long, he and Miguel Mier looked good as they raced against the 2020 ROK SuperFinal Champion and managed to hold their own. With Wang on the third step, Mier finished one position behind in fourth to end a solid season for the pair.

After a banner year for Alex Stanfield, the Junior ROK driver was hoping to come to Las Vegas and cap it off with another championship. Unfortunately, luck would not be on his side as motor gremlins hampered with his pace during Wednesday’s practice and he was not able to gain the track time he needed. Battling hard to play catchup, Stanfield progressed through the heats to start and finish the main event in the top-ten, a valiant effort for his troublesome start.