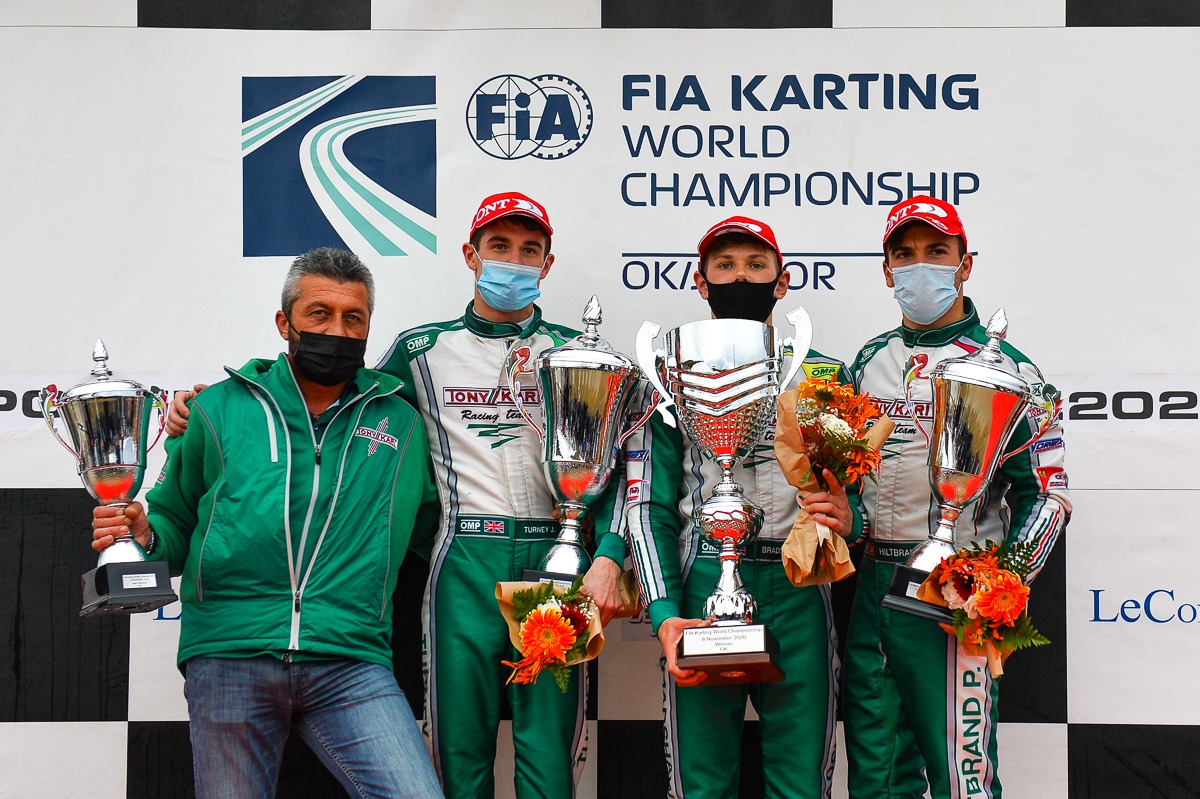 In Portimao, Callum Bradshaw precedes Joseph Turney and Pedro Hiltbrand on the finish line for an extraordinary podium all signed by the Racing Team. In OKJ, Tuukka Taponen gains the second step of the podium.

An incredible success the one achieved at the FIA Karting World Championship by the Tony Kart Racing Team, standing out in the final of the OK category thanks to the victory centred by Callum Bradshaw and the second and third place reached by Joseph Turney and Pedro Hiltbrand. An excellent result, gained in difficult conditions due to a heavy downpour that hit the Kartodromo Internacional do Algarve, in which the Tony Kart Racer 401 R chassis equipped with Vortex engines once again made the difference.

Bradshaw is the one who definitely makes the most of the OTK Kart Group, leading a perfect race from start to finish, thanks to a winning pace shown since the qualifying, where he closes with the third time, and confirmed by the best lap centred in Final and the second place obtained at the end of the Qualifying Heats. Excellent race for Joseph Turney as well, who during the weekend gains ground from the thirtieth position obtained in the qualifying heats until entering the top-10, to then make a further 6-position recovery in the decisive race. With the third place, Pedro Hiltbrand is the author of another amazing performance, enriched by the fourth place in the ranking of the heats where he also obtains a victory.

During the weekend in Portimao we step onto the world podium also in the OKJ category where our Tuukka Taponen gets an excellent second place. The Finn carries out a great performance, both in the heats and in the final, where he starts from the ninth box and immediately moves to the very first positions, with an always constant pace. In the decisive race, Aiden Neate is also standing out, recovering 19 and placing ahead of Alfio Spina, while our Bruno Del Pino, who also records a best lap in the Heats, is unfortunately pushed off the track. Excellent performances and top-10 positions during the heats also for our Harley Keeble, Maxim Rehm and Aaron Walker, who nearly reach the access to the final.

After successfully closing the most important event of the year, the international season is not yet finished. Waiting for the Tony Kart Racing Team is now the WSK Open Cup, taking place on the Adria Karting Raceway with two rounds in a week starting from November 23rd for MINI, OKJ, OK and KZ2 drivers.