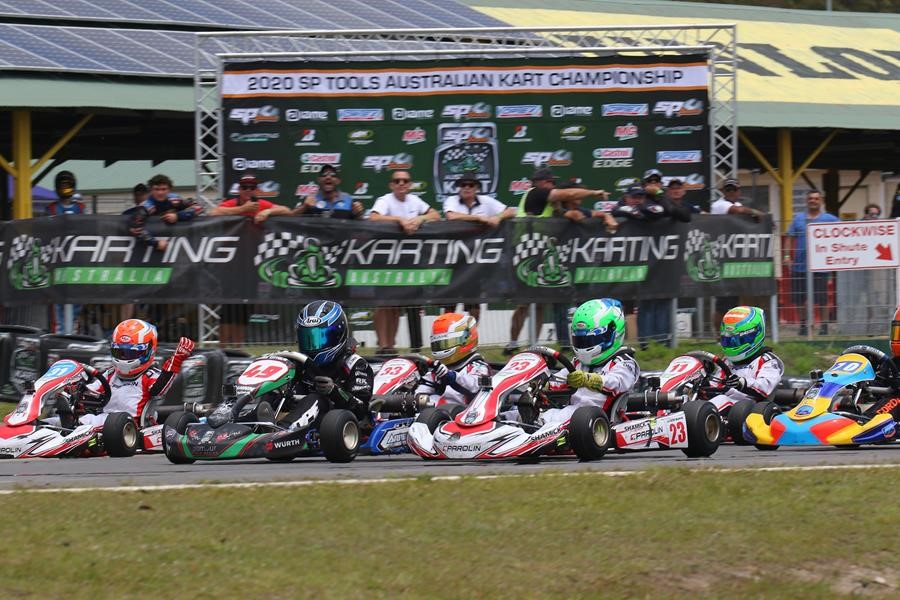 There were plenty of hard fought battles as the second round of the 2020 SP Tools Australian Kart Championship presented by Castrol EDGE concluded in Newcastle on Sunday.

The race of the day and arguably the last two seasons of AKC competition was the Cadet 12 Final. After the early running, where competitors got into their stride it developed into a three kart battle between Parolin drivers Lewis Francis, Jenson and Jaxson Burns. The Burns twins both had their shot at taking the lead over the Victorian, however couldn’t escape to a decisive lead.

With the three squabbling, it allowed the gap to the next group of competitors to close, seeing six drivers entering the final lap with a chance to win.

The jostling for position on the last lap saw all of them enter the home straight and fan out across the track – ultimately, the top five crossing the line separated by just over one-tenth of a second. Although James Cittolin (who had not been part of the initial front group) crossed the line first, he endured a front fairing infringement, dropping him to third.

This handed the win to Jaxson Burns over Cordato, then Cittolin, Francis and Jensen Marold to make it four States represented in the top five finishers.

Queenslander, Troy Loeskow was the dominant driver in the elite KZ2 class.  The Patrizicorse Ricciardo Kart driver wasn’t headed from qualifying on Saturday right through to Sunday afternoon’s 25-lap final. After leading the Championship heading into the weekend, he his domination ensured that he as amassed enough points to be declared Champion Elect and recipient of the John Pizarro Trophy with one round to go.

It is Loeskow’s third career Australian Title, his back-to-back KZ2 Titles adding to his KF2 Title of 2014.

The Final on Sunday afternoon was the toughest challenge the Bundaberg-raised pilot faced throughout the weekend.

Although he started on pole position, it was Loeskow’s Ricciardo Kart understudy, Jac Preston that entered turn one in the lead, with the Australia #1 dropping to third behind CRG’s Reece Cohen.

After clearing Cohen, there was a two second gap to Preston, who made the best of the early stages to open the lead.

Once in his race pace, Loeskow used the Vortex power at his disposal to methodically close in on the 17-year-old race leader.

After ghosting Preston for a number of laps, Loeskow attempted a move for the lead with seven laps remaining, however was denied access, with his fellow Queenslander fighting back immediately to re-take it.

An enthralling battle ensued between the two, however Loeskow applied the blowtorch and built an unassailable lead in time to greet the chequered flag.

Cohen held on for a hard fought third placing after a solid weekend, while Josh Denton took out the KZ2 Trophy class after mixing among the outright competitors from the start of proceedings.

The EVO Kart domination of the elite junior class, KA2 continued on Sunday with its two spearheads, Adrian Haak and Jimmy Pisczyk staging a thrilling battle – not too dissimilar to the one that the Ricciardo Kart team-mates staged in KZ2.

South Australian Pisczyk led from the start and held a handy buffer before Haak began closing down that advantage.

The Sydney-sider wasn’t going to let the opportunity to win the New South Wales-hosted round of the Australian Kart Championship go without a challenge and he threw everything at Piszcyk, ultimately wearing him down and then taking the lead.

From there, Piszcyk, hard as he tried, had no answer for Haak. The duo are both in strong contention to win the Jon Targett Trophy for the Championship winner.

The battle for third went to the wire with any number of competitors in line to take the final podium position. It was a battle between category debutant Kamal Mrad, Jordan Shalala and Hugh Barter.

After dropping as far back as fifth with a handful of laps to go, Rush Performance driver Mrad dug deep and pushed forth to claim a maiden podium.

The X30 class was a terse affair all weekend and the final proved no different. Queenslander, Jordi Marcon had the lead at the start of the race which he built out over 1.5 seconds.

Rush Performance Arrow pilot, Jaiden Pope closed right down on Marcon at the same time Jackson Souslin-Harlow was closing down on him. It was developing into what would be a close finish.

Marcon was relegated to third as Souslin-Harlow started to close in on Pope. JSH had several stabs at trying to take the lead in the last few laps (to no avail), which allowed Marcon to close in and enjoy the show in front of him.

On the last lap, Souslin-Harlow was finally able to force his way into the lead with three corners to go. The move opened the door for Marcon to charge through at the end and score second just in front of Pope.

Cody Brewczynski added another victory trophy to his cabinet for Top Gun Driver Academy in TaG 125, but it wasn’t without drama.

Although he led most of the race, he was being closed down at a rapid rate in the dying stages by Hayden Cox, who was on target to take his maiden Australian Kart Championship victory.

A red flag for an incident that saw Josh Buchan roll over with five laps to go saw officials declare the race, thus awarding it to Brewczynski with Cox second and Tyler Greenbury taking his TGR Tony Kart to third on his return to AKC competition.

Thankfully, Buchan in the aforementioned incident was attended to by paramedics and entered the medical van under his own steam and quickly received medical clearance.

Brewczynski is now in the box seat for the TaG 125 Championship with one of his key rivals, Brendan Nelson not finishing the final.

The Newcastle faithful were brought to their feet as one of their own, Oscar Priest crossed the line first in Sunday’s Final for KA3 Senior for the fourth time in as many rounds. The celebrations were shortlived as the Boost Mobile/Plus Fitness driver was adjudged to have a front fairing  infringement and was relegated to third with a post race penalty.

This handed the victory to Jace Matthews. The Queenslander was right in the thick of the battle for supremacy as was Matthew Waters and Benito Montalbano. Both Waters and Montalbano had difficult weekends, however ended with strong finishes in the final – Waters second behind Matthews and Montalbano fourth.

Riverwood (NSW) driver, Alex Ninovic had an almost perfect weekend in KA4 Junior if it wasn’t for a freak rain storm that struck just before his heat on Sunday morning. It was the only race he didn’t win across the weekend, storming to victory in the Final aboard his Dynamic Kart Steering PCR by a comfortable margin.

Behind him, all hell was breaking loose on the final lap. A battle between PCR drivers, Jake Rutkowski and Carter Mobbs for the third position nearly boiled over halfway through the final lap – neither were counting on Queenslander Max Walton to pounce on them for the final trophy. While Rutkowski and Mobbs battled each other, Walton – his category debut – swung around the outside of both and placed his ZedCorse Parolin into third.

In the youngest category on the program, Cadet 9, it was another good day for the Queenslanders, taking the quinella. The star of Saturday’s show, Sebastian Eskandari-Marandi was the pick of the crop, taking his Advanced Sports Clinic Energy to a commanding win and making his presence felt in his first ever AKC event.

Basilio Micale kept his Championship hopes alive with an incredibly hard fought second position, while another AKC rookie in Corey Carson crested the podium after a fine drive in his WPR Racing PCR chassis.

Thus rounds off what has been an outstanding return to competition for the SP Tools Australian Kart Championship, presented by Castrol EDGE after what has been an enforced layoff spanning almost nine months.

There is just one round of the Championship to go on the first weekend in December. With two of the three rounds counting towards a Driver’s final standings, there is still plenty to play for as Karting Australia looks to award its 2020 Australian Champions.

Full results from the Newcastle Round of the SP Tools Australian Kart Championship can be accessed HERE.