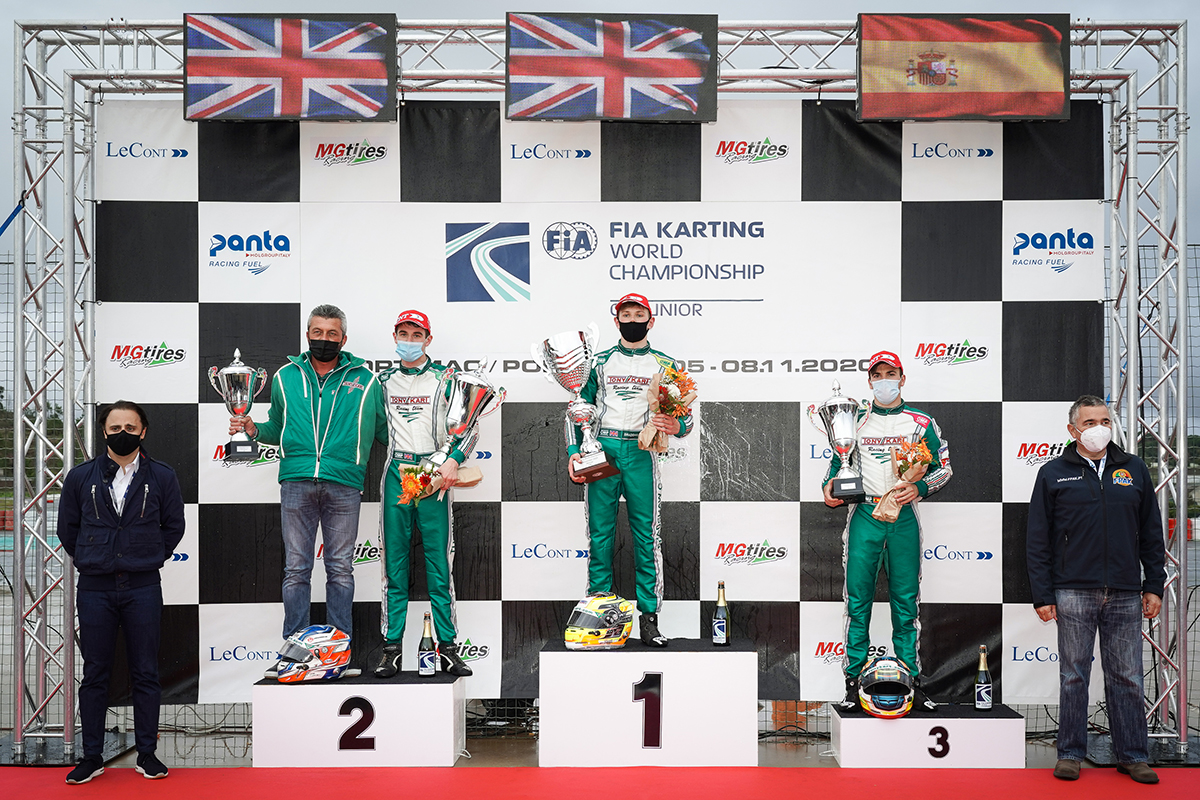 The conclusion of the 2020 FIA Karting World Championship – OK & Junior had no lack of turnarounds before crowning two new British Champions. The omnipresent rain on Sunday 8th November on the Kartódromo Internacional do Algarve played a major role in the final outcome. Freddie Slater, winner in the last metres in the Junior category, and Callum Bradshaw, incredibly dominating in the OK Final, deserve the warmest congratulations.

The rain didn’t fall during the entire day, but the circuit of Portimão remained constantly very wet during the whole Competition. The contrast with the previous day set up a new balance of power in the last Qualifying Heats of the morning. As it was difficult to escape from all the traps set by the limited grip, there were many small race incidents. Several Drivers left their illusions on the edge of the track during uncontrolled slides that could happen at the beginning of the race as well as in the lead up to the finish.

Junior: Slater titled after a battle 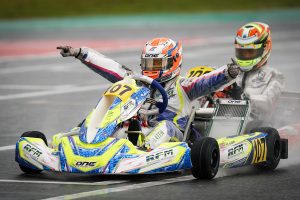 Christian Ho (SGP – KR/Iame/MG) started from pole position for the Final alongside European Champion Ugo Ugochukwu (USA – KR/Iame/MG). An minor incident involving several karts took place shortly after the start and the “slow” procedure was initiated to clear the track and its surroundings. Freddie Slater (GBR – Kosmic/Vortex/MG) had already taken the lead and Ho was chasing after him. Harry Burgoyne (GBR – KR/Iame/MG) and Arvid Lindblad (GBR – KR/Iame/MG) came to join the battle. After mid-race, Slater seemed to be on his way to an easy victory with his lead of more than 1,5″. But Lindblad mastered the wet track perfectly and came closer and closer in the last laps. An intense battle between Lindblad and Slater took place watched by Ho who went slightly off the track and tried to take advantage of it. Lindblad seemed to be in a position to take the victory in the last corners, but Slater didn’t give up and finally won by a few thousandths of a second. Lindblad was then penalised for an incorrectly positioned front fairing and it was Tuukka Taponen (FIN – Tony Kart/Vortex/MG) who took second place with a gain of seven places. Still present in the leading group, Burgoyne finished third on the podium, ahead of Ho and Lindblad in fifth position.

Freddie Slater was crowned FIA Karting World Champion – Junior at the age of 12 in the colours of the Ricky Flynn Motorsport team. 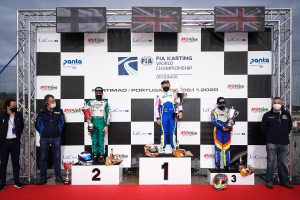 Two of the three USA drivers made the main event, including Ugochukwu and Zilisch. Ugo was shuffled back to fourth on the opening circuit, and after the race was restarted, fell back a few more positions. He fought for the sixth position toward the end of the race, ending up back in eighth at the checkered flag. Zilisch suffered a DNF in his final heat race after spinning due to a large puddle on the track surface. That dropped him outside the top-20 for the main event grid. Starting further back, Zilisch was a victim of a wild start that saw a number of drivers spinning in front of him, and with no where to go was collected in the incident.

“My weekend at the FIA World Championship was very difficult. Having to drive in the rain for most of the weekend, including qualifying was very challenging . At the end of the weekend in the last heat I was getting closer to the leader’s pace. Overall, it was a difficult weekend but improved a lot over the whole time. I am ready for the next one and going to be pushing hard to improve as much as I can.”

Unstoppable domination of Bradshaw in the Final 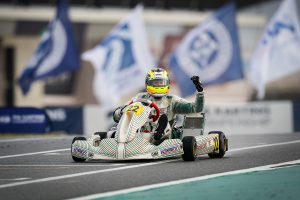 Leader of the Qualifying Heats of the FIA Karting World Championship – OK with his three victories the day before, Taylor Barnard (GBR – KR/Iame/LeCont) maintained his status on Sunday morning despite the already impressive comeback of Callum Bradshaw (GBR – Tony Kart/Vortex/LeCont) in the rain. These two Drivers shared the front row of the Final in front of two experienced opponents, Lorenzo Travisanutto (ITA – Parolin/TM/LeCont) and Pedro Hiltbrand (ESP – Tony Kart/Vortex/LeCont). The poleman Matheus Morgatto (BRA – Birel ART/TM Racing/LeCont) was one of the Drivers that was delayed in the morning.

The rain had calmed down by the time of the start, but the track was still wet. A collision occurred shortly after the lights went out and the race was neutralised. A new start was given 25 minutes later, but neither Andrea Kimi Antonelli (ITA – KR/Iame/LeCont), nor Maya Weug (NLD – Birel ART/TM Racing/LeCont) were able to get back on track.

Bradshaw was immediately very fast in these track conditions. Barnard couldn’t follow his rapid pace and was soon under threat from Hiltbrand and his team-mate Joe Turney (GBR – Tony Kart/Vortex/LeCont). Further back, some slippery figures continued to eliminate serious contenders. Without ever reducing his pace, Bradshaw let his joy explode by crossing the finish line more than six seconds ahead of Turney and Hiltbrand, a winning triple for the Tony Kart Racing Team. Morgan Porter (GBR – KR/Iame/LeCont) ensured a strong 4th place ahead of Barnard, whereas Travisanutto finished 6th. Two official CRG drivers made strong comebacks during the race: Rasmus Joutsimies (FIN – CRG/TM Racing/LeCont) to 8th with a gain of 19 places and Ruben Moya Lopez (ESP – CRG/TM Racing/LeCont) 10th with a gain of 22 places.

At the age of 19, British driver Callum Bradshaw was crowned FIA Karting World Champion – OK in the colours of the Tony Kart Racing Team, four years after winning the FIA Karting Academy Trophy.

It was tough sledding for the two USA drivers. Deukmedjian certainly showed speed to be among those in contention, however, could not record the results in the heat races needed to make the main event. For a first time racing in Europe this year, Morgan did well just not enough to be in contention for a position on the main event grid.

“The FIA World Championships was a great experience for me! All the people running the event were super friendly and it was run very smooth. The conditions were very tough to adapt to with it being very rainy at times. Unfortunately i was not able to make the final after some poor decisions and bad luck but it was a great experience.”