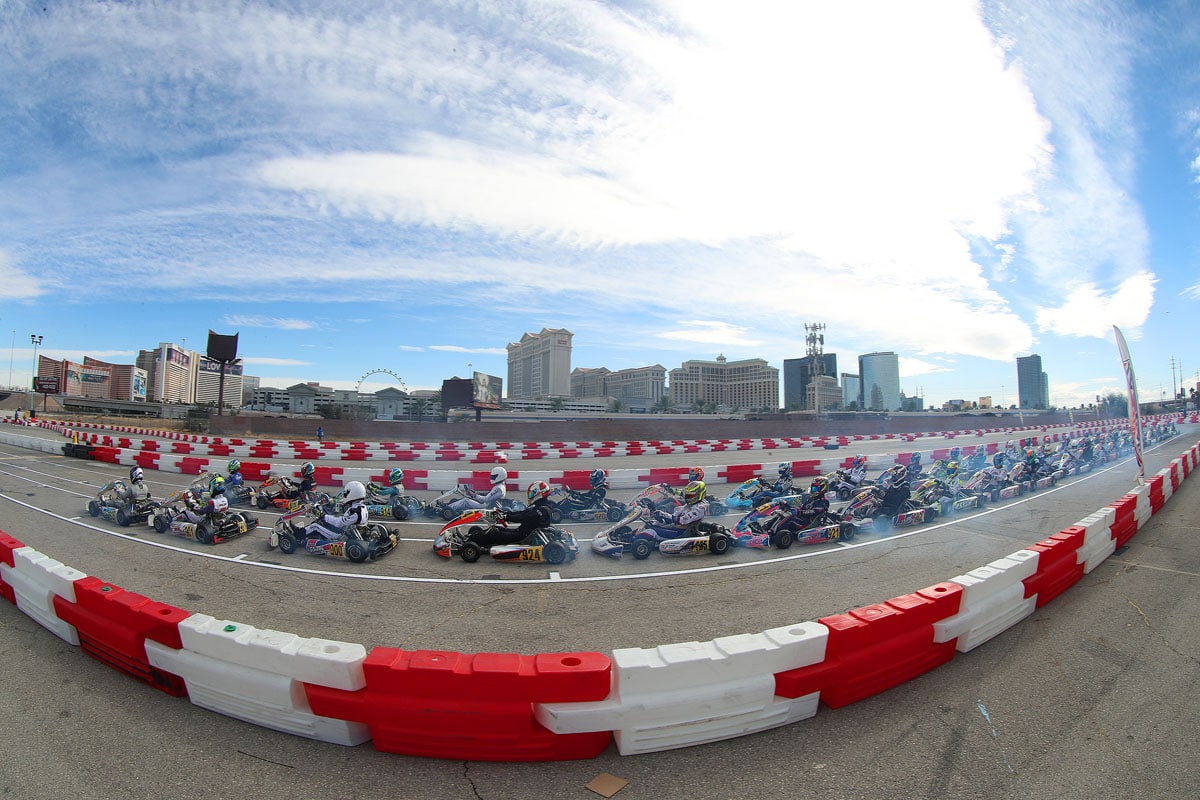 With the heat races now complete, the grids are now set for Championship Sunday. With cold, wind and rainy conditions throughout the day, officials braved the conditions while teams and drivers progressed through two more heat races with the final day on the 2020 ROK Cup USA calendar on the horizon.

Junior 100cc – Nash Motorsportz
Parker DeLong (Ryan Perry Motorsports) added to his heat race win total with the heat three victory beating Ayden Ingratta (Speed Concepts Racing) by .250. Thomas Annunziata (Team Benik) ended his heat race in P3 while Jack Jeffers (Speed Concepts Racing) gained six positions to cross the line in fourth as he aims to challenge for the win. Danny Dyszelski (Ryan Perry Motorsports) fell one spot to round out the top-five while the biggest mover of the race was Noah Baker who gained 16 positions to finish seventh.

With rain lightly falling during the lunch break, drivers were given the option of wet or slick Bridgestone Tires and most chose to stay on the dry weather option. With the precipitation intensity picking up, it was slow going and some carnage during the opening laps of the fourth and final heat as new names appeared at the top of the charts. Kieran Rogers (Italian Motors) jumped thirteen positions to score the win. Danny Dyszelski would cross the line in second with Noah Baker (Supertune) closing his heat in third. Ayden Ingratta remained in the top-five with a fourth-place effort while Thomas Annunziata was fifth.

With the track still slick for heat four, many of the Senior 100cc drivers chose the wet weather Bridgestone Tires and it was another handful of new names near the top of the charts. Oliver Calvo scored the win but Jackson Dunn (Forward Direction Motorsports) was the driver of the race gaining seventeen positions to finish second, less than one second ahead of Falls-Hand in third. Austin Osborne (Ironrock Motorsports) gained seven positions to end his heat four in fourth while Joshua Fine (Real Fine Racing) was fifth.

Antonino was able to work his way to the top of the results in heat four scoring the win for Race Factory a mere .253 ahead of Orjuela. Gafrarar leveled up one position to finish third while Sebastian Wheldon (JC Karting) gained two to finish in the fourth position and Diego Ardiles (Zanella Racing) was fifth. Following the race, Orjuela was promoted to the top spot as Antonino was given a penalty that dropped him to the fourth position.

Shifter Master ROK – Dallas Karting Complex
Ryan Kinnear (PG Karting) made it three for three in the heat races as he and Jordan Musser (PSL Karting) drew away from the rest of the Shifter Master ROK field. Neil Joseph (Ron White Racing) had to settle for the third position as he stayed just ahead of Ryan Yop (TK America) in fourth and John Crow (GFC) in fifth.

Jordan Musser took advantage of wheel spin from Kinnear to jump to the lead and score the heat four victory. Falling deep in the field, Kinnear could only work his way back to sixth while Neil Joseph and Ryan Yop were able to finish second and third. Crow was able to also level up a position due to Kinnear’s misfortune with Nathan Stewart (Full Gas Motorsports) rounding out the top-five.

Senior ROK – Rolison Performance Group
Thomas Nepveu (PSL Karting) continued his winning ways in Senior ROK as the top-ten drivers had a fierce battle for position, some which failed to finish. Jace Denmark-Gessel ran and hid from the hornets’ nest of drivers to finish second while Jonathon Portz (RPG) survived the melee to finish third with Jake Drew (GFC) in fourth and Luca Mars (Speed Concepts Racing) fifth. Oliver Calvo (Leading Edge Motorsports) gained sixteen to finish tenth as Brandon Jarsocrak (Mike Doty Racing) crashed hard in the late stages of the heat and will be forced to start heat four from the back of the grid.

It was an eight-driver battle for the win in the final Senior ROK heat of the weekend as Jake Drew rose to the occasion to steal the victory. Holding off a hard charging group, Drew finished just ahead of Denmark-Gessel as Christian Brooks (Nash Motorsportz) made his first trip to the top-five all weekend gaining four positions to finish third. Woods-Toth claimed the fourth position and Luca Mars finished fifth. Woods-Toth was dropped two positions post-race for a bumper penalty elevating Nepveu to fifth.

Jader-David and Billy Cleavelin (RPG) would be the two that were left to battle for the heat four victory with Jader-David scoring the win by .374. More than four second in arrears of the front two was Derek Wang as he held off the advances of a hard charging Martin Pierce who gained three positions over the ten-lap heat. Miguel Mier matched Pierce’s movement forward and also jumped three positions to end his day in fifth. Everyone behind Jader-David in the top-five would advance forward one position after official results noted Cleavelin in the fifth position putting David Pergande (JH Motorsport) in P5.

It was all Ochstein in heat four as he scored the fastest lap of the race and drove to a 1.388 victory over Cristea and Murphy. Alessandro Truchot (Parolin USA) gained one more position to finish fourth while Marco Romero (Zanella Racing) took advantage of some last lap passes to advance forward to fifth.

Junior ROK – AM Engines / MD Audio
John Burke and Noah Baker made it a Team Supertune 1 – 2 finish in heat three as they traded places lap after lap amongst the top-five. Jack Jeffers (Speed Concepts Racing) led early but fell back to finish third while Ayden Ingratta put his Speed Concepts Racing Redspeed in P4. Jeremy Fletcher (Team Benik) had a solid drive forward gaining five positions to end his heat in fifth.

Burke went perfect on the day in Junior ROK taking the heat four win ahead of Team Benik teammates Thomas Annunziata and Jeremy Fletcher who each gained three positions through the ten-lap heat race. Ayden Ingratta held on to his fourth place starting position to beat Noah Baker and a hard charging Cameron Weinberg (Supertune), who gained twelve positions.

Master 100cc – RLV
Carlos Calderon (Aluminos) made it three-for-three in his heat races as he scored the win ahead of Tim Meyer (HRT) and Nick DeGraff (MMK / Mike Manning Karting). Adam Kasick (Forward Direction Motorsports) battled hard in the top-five to finish fourth, just ahead of Mike Jones (DKC) in P5.

Miguel Mier (Team Crosslink) gained five positions to climb to the top of the Master 100cc class in heat four just ahead of Anthony Simone (Goodwood Kartways), who climbed ten positions to finish second with Mike Jones in P3. Adam Kasick scored another top-five result with a fourth-place effort while DeGraff finished fifth.

Myers rocketed off the line at the start of heat four shooting out to the lead and not looking back. Askew was able to hold on to the second spot as Pickett added another third-place finish for his weekend total. Aidan O’Neill closed his day in P4 with Kyle Wick (RPG) in fifth. Jake French (PSL Karting) had a solid drive gaining ten positions to finish sixth.

With grids set for tomorrow, here are all the results from the weekend – CLICK HERE