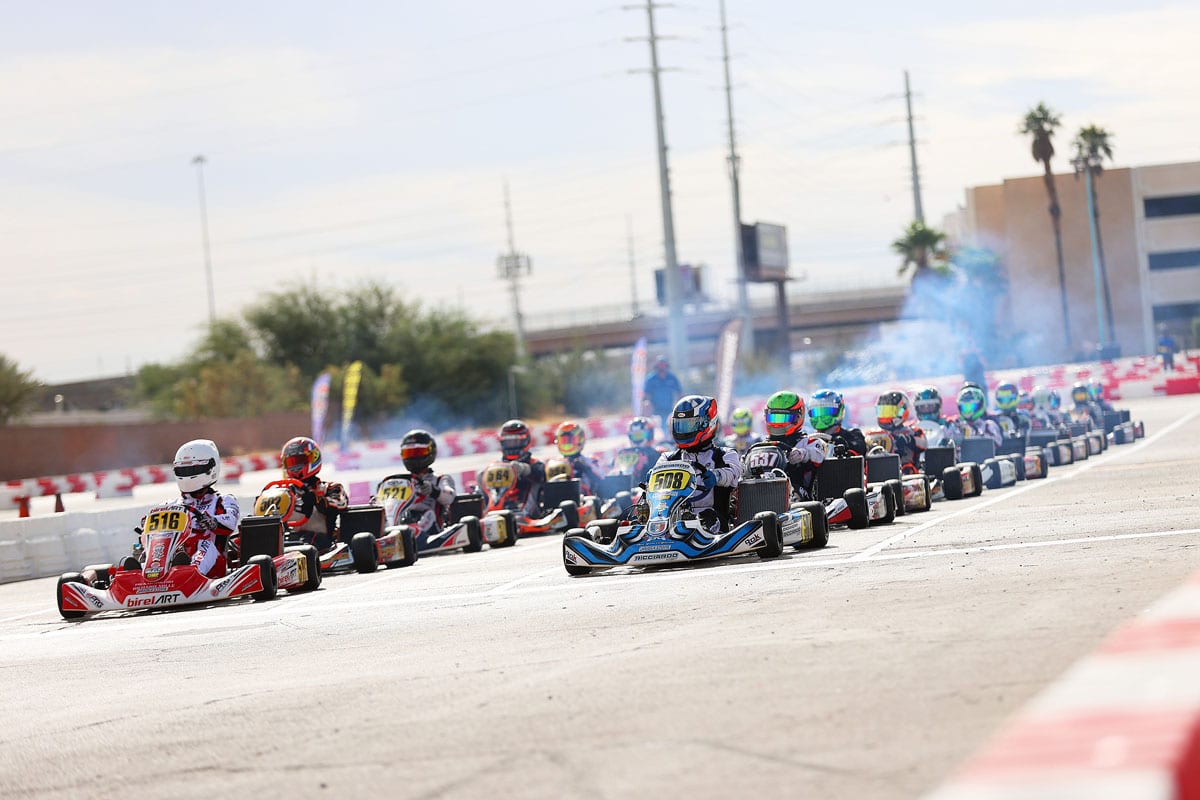 Heat One and Two

Junior 100cc – Nash Motorsportz
The Junior 100cc drivers kicked off the day with the first green flag of the weekend as five karts drew away from the field. With the front two separating from the rest, everyone was brought back into contention with some hard racing over the final two laps. Ayden Ingratta (Speed Concepts Racing) led all but one lap as he was overtaken by Parker DeLong (Ryan Perry Motorsports) in the final corner to score the heat race win. Noah Baker (Supertune) was also able to slip by into second while Thomas Annunziata (Team Benik) earned a third-place result for his performance. While Ingratta fell back to fifth, Danny Dyszelski (Ryan Perry Motorsports) was the other benefactor moving to fourth in the final complex of corners.

It was a two-horse race in heat two as Thomas Annunziata and Parker DeLong pulled away from the field with Annunziata making the move on the penultimate lap to steal the win. Delong was able to come home second while Ingratta crossed the line in third. Cameron Weinberg (Supertune) advanced forward six positions to give himself a shot in heats three and four tomorrow while Danny Dyszelski fell one to end his heat two in fifth. Weinberg was penalized post-race falling two positions to sixth and elevating Alex Berg (Ryan Perry Motorsports) to fifth.

Heat two started with Oliver Calvo taking the point and leading early but it was Nick Ramirez who climbed back to the point to take the heat two win. Opalski again found himself in the third position with Altzman in fourth and Falls-Hand in fifth as the top-five results from heat two matched that of heat one.

Matias Orjuela put his Parolin USA entry at the front of the field in heat two as he gained one position to take the win. Sebastian Garzon crossed the line in second while John Antonino (Race Factory) gained three positions to finish third ahead of heat one winner Caleb Gafrarar who was fourth. Oliver Wheldon managed to maintain his fifth place starting spot to finish fifth.

Kinnear and Musser were the top two again in Shifter Master with Kinnear turning fast lap after fast lap to draw away from his rival. Kinnear would score the win by .486 over Musser as Ryan Yop gained one position to finish third. Neil Joseph put his CRG entry in P4 as Nathan Stewart (Full Gas Motorsports) was fifth. John Crow had an epic drive froward gaining five positions to finish sixth.

Nepveu continued his winning ways in Senior ROK as the front five drivers had a spirited fight until some close racing allowed the front two to stretch a gap. Nepveu scored the win to remain perfect on the weekend so far as Denmark-Gessel led briefly but had to settle for second. Mars looked to be in the fight for the win but choosing to defend over the final two laps ended his day in third. Jake Drew (GFC) moved from sixth to fourth while Patrick Woods-Toth rounded out the top-five.

Master ROK – Orsolon Racing
With the top-five Master ROK drivers remaining lock step throughout the heat, it was Martin Pierce (CompKart) who did a masterful defending job over the final two circuits to take the win. Billy Cleavelin (RPG) found his way to the second position while 2020 ROK Cup SuperFinal champ Renato Jader-David (Orsolon Racing) was third. Vatche Tatikian took his Phil Giebler Racing entry to a fourth-place finish while Miguel Mier (Team Crosslink) slotted in P5. Following the heat, Cleavelin was given a bumper penalty relegating him to sixth and bringing Derek Wang (Team Crosslink) into the fifth position.

Pierce opened a lead of nearly one second over the first half of the race but Jader-David poured it on late. Turning multiple fast laps in a row, Jader-David closed the gap making the pass on the final lap to score the win. Pierce would hang on to second as Billy Cleavelin climbed three positions to work his way back forward to third. The Team Crosslink duo of Miguel Mier and Derek Wang finished fourth and fifth respectively and will start in those positions for heat three tomorrow.

Micro ROK – RLV
Asher Ochstein (Team Benik) took the lead of heat one just past the halfway mark and never looked back. Stretching the lead by over two seconds, Sarah Bradley (Team Benik) crossed the line second to make it a 1 – 2 finish for Benik. Brody Budelli (Leading Edge Motorsports) was the best of the rest in third with Max Cristea (Magik Kart) and Tristan Murphy (Team Kartnick) surviving the last lap attacks from behind to finish fourth and fifth.

Ascher Ochstein broke away from the pack early after it took a few extra laps to get the Micro ROK drivers grided and under green flag conditions. Staying ahead of the battle behind him, Ochstein stretched his gap and drove to his second heat race win of the day. Brody Budelli put his Leading Edge Motorsports entry in P2 ahead of Tristan Murphy and Alessandro Truchot (Parolin USA). Off pole starter Sarah Bradley ran in the top-three throughout the race falling two positions on the final lap to end her day in fifth.

Junior ROK – AM Engines / MD Audio
Jack Jeffers (Speed Concepts Racing) held off the advances of a hard charging John Burke (Supertune) and Noah Baker (Supertune) in the last few circuits of the Junior ROK heat one to take the win. Burke, who fell to third, moved back to second on the penultimate lap to edge out his teammate for the second position. Baker was able to hold on to P3 while Alessandro De Tullio (Parolin USA) and Ayden Ingratta (Speed Concepts Racing) finished fourth and fifth.

Noah Baker drove to the front of the Junior ROK field and secured the race win and accompanying pole position for tomorrow’s third heat race. Ayden Ingratta, who ran fifth for the majority of the race, was the biggest benefactor of some last corner drama to advance forward to second as Jeffers, who lead early, finished third. De Tullio was able to maintain his fourth place starting position to finish fourth while Burke crossed the stripe in fifth.

Master 100cc – RLV
Carlos Calderon (Aluminos) continued his presence at the front of the field taking the heat one victory by .510 over Miguel Mier (Team Crosslink) with Tim Meyer (HRT) holding on for a P3 finish. It was Nick DeGraff (Mike Manning Karting) that would cross the line in fourth as Mike Jones (DKC) finished fifth as the top-five remained unchanged from qualifying.

Making it a perfect day, Calderon drove to the Master 100cc race win as the top four drivers were separated by just a half a second. Meyer, who led early, fell to second in the late stages of the race. DeGraff moved one more position forward to finish third as Jones had similar advancement to finish fourth while Team Crosslink front-runner Miguel Mier finished fifth.

It was Askew who climbed back to the top of the ROK Shifter results sheet as he outdueled O’Neill, who led early. With the top-five bumper to bumper, O’Neill secured the second position on track as Hunter Pickett put a pair of GFC drivers in the top-three in third. AJ Myers (Magik Kart USA) made his first top-five appearance gaining eight positions to finish fourth while Ruscitti was fifth. Formal continued to march his way forward gaining another seven positions to finish 12th.

With day three now in the books, teams and competitors will be back on track tomorrow for heats three and four as they aim to score the results needed to be as far up the grid as possible for Championship Sunday.