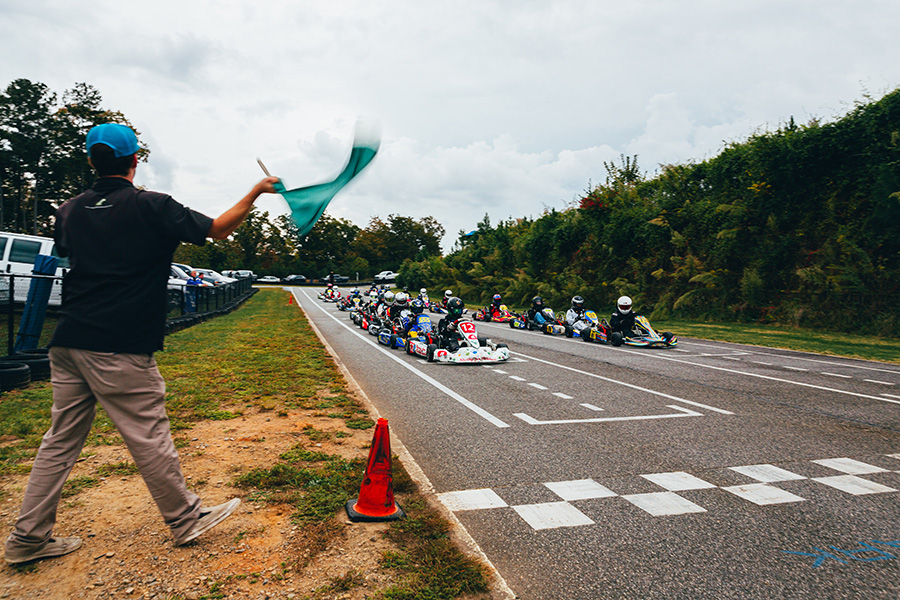 With rain in the forecast for the afternoon drivers prepared for a challenging day that could see mixed conditions during the finals races. Almost every class featured a sizeable field which led to close racing on track.

Alyssa Vascocu started on pole with Oliver Piatek and Joseph Saddington behind. Piatek made the best start and took the lead into turn one but two laps later Vascocu made a good exit out of the final corner and retook the lead. Piatek tried to go down the inside of Vascocu into nine a couple of times but was never close enough to make the move stick. While they battled, Saddington patiently waited for an opening to make a move.

Near the halfway point of the race, Piatek finally retook the lead but immediately had to start defending as Vascocu and Saddington made it three-wide into turn four. Everyone held their positions and crucially avoided contact. On the last lap, Vascocu made the move for the lead and as Piatek attempted to come back at her on the back straight she forced Piatek to put two wheels on the grass. This opened the door for Saddington to pass Piatek as well while Vascocu went on to win. Behind the battle between the frontrunners, Kai Mars finished fourth as Brayden Rieger’s race ended one lap early.

A field of 17 Senior and 3 Master drivers took the green for the final race and they managed to keep it mostly clean during the opening laps.

The Senior race started with Alistair Edwards on the pole, Nicholas Lefferdo in second, and Shawn Rashid behind in third.  Lefferdo had the advantage at the start and moved into the lead at turn 2.  For the remainder of the race, Lefferdo was challenged by Edwards with late braking in turn 6 and 16. Their battle allowed Antonio Abrom to catch the leading pair despite starting fifth and he set the fastest lap of the Final on the last lap.  Even while constantly jockeying for position Lefferdo, Edwards and Abrom created a five-second gap ahead of the rest of the field while Rashid dropped to fourth place.  The top three held their positions while the midfield drivers squabbled over the remaining top ten places. On the final lap, Edwards made the move to the inside line in turn 16 resulting in a drag race with Lefferdo to the finish. Edwards had the momentum to take the top step on the podium by 0.075 thousandths of a second.

The LO206 Master class was a little more docile with Darryl Quick starting on the pole with Greg Brandon in second and Dennis Durando in third position.  Constantly racing in the midst of Senior drivers, Greg Brandon would take the lead in lap 2 and finish the race in the top spot with Darryl Quick setting the fastest lap of the Final in second and Dennis Durando remaining in third.

The final race of the day took place as light rain began to fall making the track damp while all the drivers were on slick tires. The nine driver field kept it clean through turns one and two and Zach Frank was able to create a gap as Steve Frank, John Stapleton, and Chad Lee battled over third. The damp conditions suited Lee who went from fourth to second in the opening two laps. Stapleton and Steve Frank swapped positions for the second half of the race with Frank emerging ahead to take the final spot on the podium.

All results and standings can be found on speed hive: https://speedhive.mylaps.com/Events/1820807

Learn more about racing at AMP Kart Racing at the Atlanta Motorsports Park by visiting www.atlantamotorsportspark.com/karting