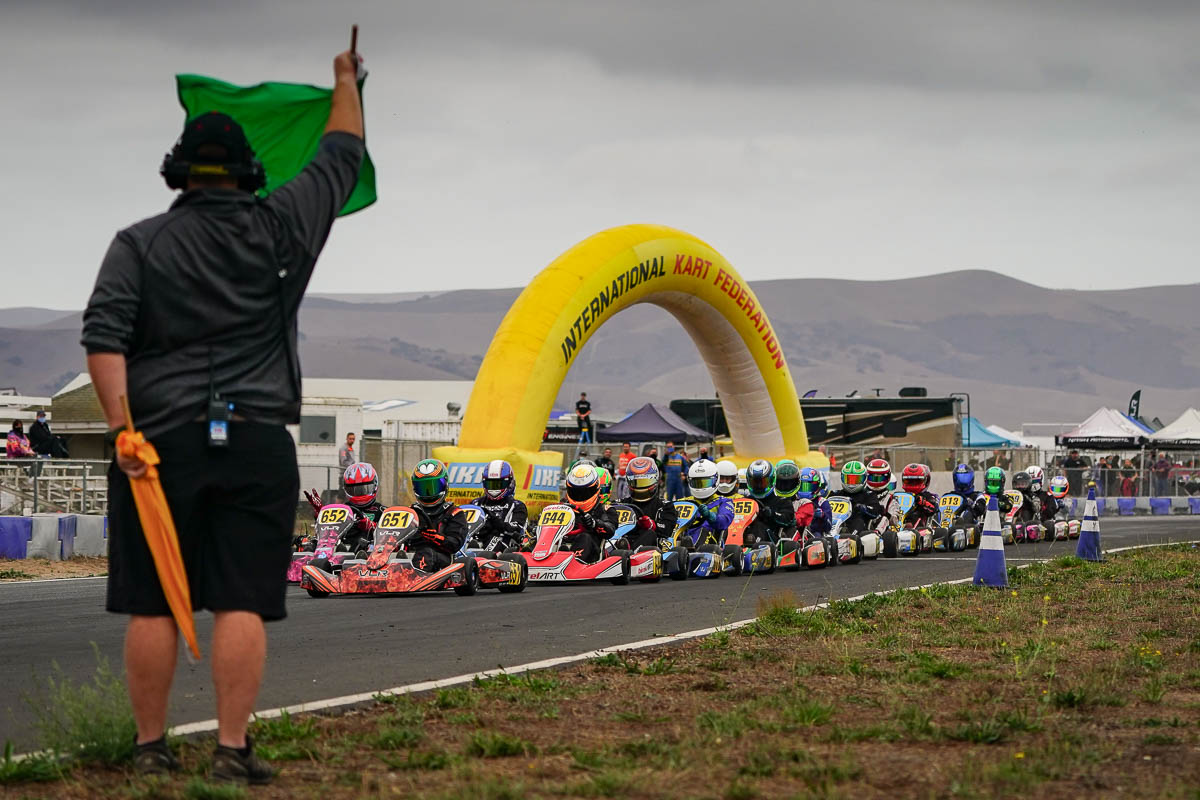 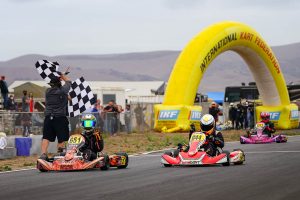 The International Kart Federation (IKF) held the Sprint GrandNationals presented by RLV for the 2020 season at the Santa Maria Karting Association (SMKA) facility on October 23-25. Racers from all over the western half and across the United States converged on the Santa Maria, California circuit to decide this year’s GrandNationals winners in eight categories. Each of the winners in the IAME and Briggs & Stratton Racing divisions took home the coveted ‘Duffy’ trophy, one of the sport’s most honored prizes.

Over three days of competition, drivers took to the 7/10-mile ‘K’ circuit at the SMKA facility. A full day of practice along with qualifying was held on October 23. Three rounds of progressive heat races made up the action on October 24, with the third heat determining the grid for the eight main events, crowning the 2020 winners on October 25. Weather throughout the weekend was comfortable yet cloudy, but all on-track sessions were conducted without the threat of rain for the 140 entries in attendance. 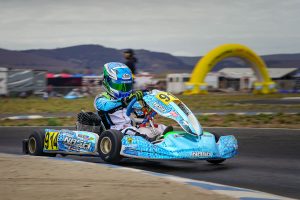 Blake Nash was strong at the end of the event to claim the win in KA100 Senior (Photo: Ken Johnson – Studio52.us)

The largest category of the weekend was 30 drivers in LO206 Senior presented by Briggs & Stratton Racing. Leading the way after the timed qualifying session was Sophia Storey, posting a 55.183-second lap time. The top-20 drivers were all within one second of her time, heading into the heat races. Storey was shuffled back at the start of the opening 12-lap heat race, ending up fifth as Tyler Agan led the entire run, holding off P2 in qualifying David Vasquez. Storey fought back in Heat #2, grabbing the lead on the final circuit, holding off Vasquez and Agan at the line as all three took the checkered flag separated by 84 thousandths. Vasquez became the third different heat winner, leading 11 of 12 laps ahead of Storey and Agan. It was the same three drivers leading the way in the 22-lap main event. Vasquez led the majority of the race with Agan jumping in for a brief lap at the point. Storey put herself into the second spot on lap 14, putting on the pressure with three laps to go. That is when she took over the point, and the shuffle for the victory commenced. Vasquez led at the white flag with Storey back in third. When they came to the checkered flag, Storey edged out Agan by 48 thousandths for the victory. Vasquez settled for third with Joey Brienza and Jess Peterson completing the top-five. 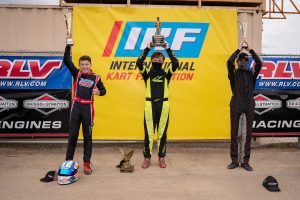 Aside from the desired Duffy trophy, a $3,000 cash prize was on the table for the victory in the Nash Motorsportz KA100 Senior division. A number of drivers were in contention throughout the three days. Michael Michoff set the tone with a 50.017-lap in qualifying. The top-three, including Dylan Wilkins and Jacob Yesnick, were within 85 thousandths in the session. Wilkins led the second half of Heat #1 to earn the win by six hundredths ahead of Michoff. Joey Brienza finished third and stole the lead on the final circuit to win Heat #2 in front of Wilkins. Finishing third was Blake Nash, who came out with the win in Heat #3. Nash set fast lap – and took the lead on the 12th and final circuit – for the win ahead of Billy Musgrave and Chris Wehrheim. Sophia Storey led at one time in that race and put herself at the front in the 22-lap main event. Storey showed the way in the first three laps until Nash took back the position. From there, Nash led the way to the checkered flag for the Duffy and $3,000 pay day. Aiden Kempf fought his way up to second from sixth, dropping Musgrave to third. Storey ended up fourth with Wehrheim in fifth.

It was a near sweep of the event for Boden Barnwell in LO206 Junior presented by Prairie City Kart Track & Cambrian Go-Karts. Barnwell cleared the field by three tenths of a second in qualifying with a 54.218-lap. After leading all 12 laps of the opening heat race, Barnwell came up just short in Heat #2 as Stephen Eisert scored the win. The gap after 12 laps was only 10 thousandths at the line in Heat #3 as Barnwell was back on top over Eisert for the pole position in the main event. That was all Barnwell needed, leading all 22 laps in the Final to the victory. Chase Hand drove to the runner-up position, only seven tenths of a second off Barnwell. Kade Godbehere completed the podium in third with Juliette Jensen in fourth. Eisert came across the line in fifth, but was removed in tech for a chain guard issue. That promoted Jonathan Endrizzi Jr. to the fifth position. 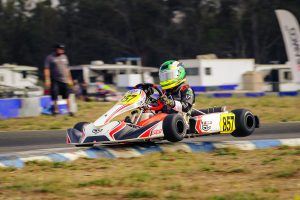 A near sweep of the KA100 Junior category for Logan Toke (Photo: Ken Johnson – Studio52.us)

It was a similar story in the PKS Kart Supplies KA100 Junior class. Jesus Vasquez Jr. set fast time in qualifying with a 50.321-lap. Logan Toke was third in the session, but jumped out to the lead in the opening heat race. Toke led all 12 laps for the win, and did the same thing in Heat #2 and Heat #3. All 24 laps were led by Toke in the Final, driving away to a four-second advantage. Peyton Phillips was able to beat Vasquez to the line for second, with Chase Hand and Juliette Jensen rounding out the top-five.

Twelve drivers made up the field in the Briggs & Stratton Racing LO206 Master division. Kenny Manchester was the driver to beat following qualifying with a 56.228. He was pushed back to third at the start of Heat #1 as Adam Verlengiere took over. Manchester was able to slip past on the final circuit for the win. Heat #2 was the opposite, with Verlengiere getting shuffled back to third and driving up to take the lead and the win on the final circuit. In Heat #3, Verlengiere fought with Brandon Walsh for the lead, edging out by 75 thousandths for the win and pole position for the main event. Their fight continued into the 22-lap main event, with both drivers posting a duplicate fast lap on the same circuit. Verlengiere led 19 of the 22 circuits, including the last seven for the victory. Walsh settled for second with Manchester in third. Brian Gallagher was fourth with Johnny Cope in fifth. 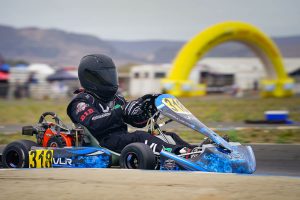 A total of 20 drivers took part in the Cole Nelson Racing LO206 Cadet class. Everyone was chasing Parker DeLong. It was DeLong that went untouched through qualifying and the three rounds of heat races, going wire-to-wire. DeLong was unable to make the start, with a mechanical issue during the pace lap. This opened the door for a fight in the 22-lap main event. Cooper Perez jumped out to the lead early but was challenged by Ragan Saville and Ben Corkery. On lap 15, Saville secured the lead and was able to lead the rest of the way, pulling out to an eight-tenths advantage by the checkered flag. Corkery posted fast lap of the race, but settled for second. Logan Chambers slipped up into third as Perez fell back to fourth. Trestin Moore won the fight for the fifth position.

A bit of drama unfolded in Mini Swift presented by Siggy’s Carpet Cleaning. John Antonino was the driver to beat throughout the event. Antonino edged out Parker DeLong by nine hundredths of a second in qualifying and went on to win the heat races by one second, nine seconds, and seven seconds. DeLong had issues in the opening two heat races but raced up to fifth in Heat #3. It took DeLong just two laps to take over the top spot in the 22-lap main event. From there, he and Antonino battled for the top spot until lap 18. An issue for Antonino dropped him back to the sixth spot, as DeLong went on to reach the checkered flag first. A three-second penalty was assessed for an incident at the start for DeLong. However, the margin of victory was enough for DeLong to claim the victory. Keagan Kaminski ended up second with Valentino Garbarino completing the podium in third. Truly Adams was fourth with Ryan Giannetta up five spots to fifth. 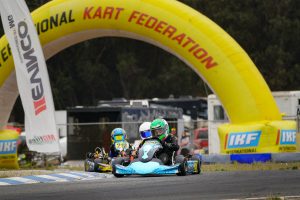 The race in the P1 Racing Engines Micro Swift class was wide open throughout the event. Charlies Smith set fast time in qualifying with a 54.272-lap to clear the field by four tenths of a second. Tristan Murphy battled Smith in the opening heat race, coming up just short at the line by 82 thousandths of a second. Murphy came back to win Heat #2 and Heat #3, with the field on his bumper in both outings. It was McLaren Carroll leading after the opening circuit of the 22-lap main event and setting the pace for two laps before Murphy took back the position. Murphy set the pace for most of the race and was eventually run down by Ashton Woon. Starting fourth, Woon got himself into the second spot by lap 17, and two circuits later took the lead from Murphy. From there, Woon led the remainder of the race, reaching the checkered flag first for the victory. Murphy, who ran fast lap of the race, settled for the runner-up position with Carroll holding off Smith for third at the line. Bronson Koustas completed the top-five.

In addition to the Duffy trophy for the winner in each category, the IKF ‘Screaming Eagle’ was presented to all the top qualifiers in each category. IKF would like to thank all the competitors, families, sponsors and supporters for making the 2020 IKF Sprint GrandNationals exciting and fun