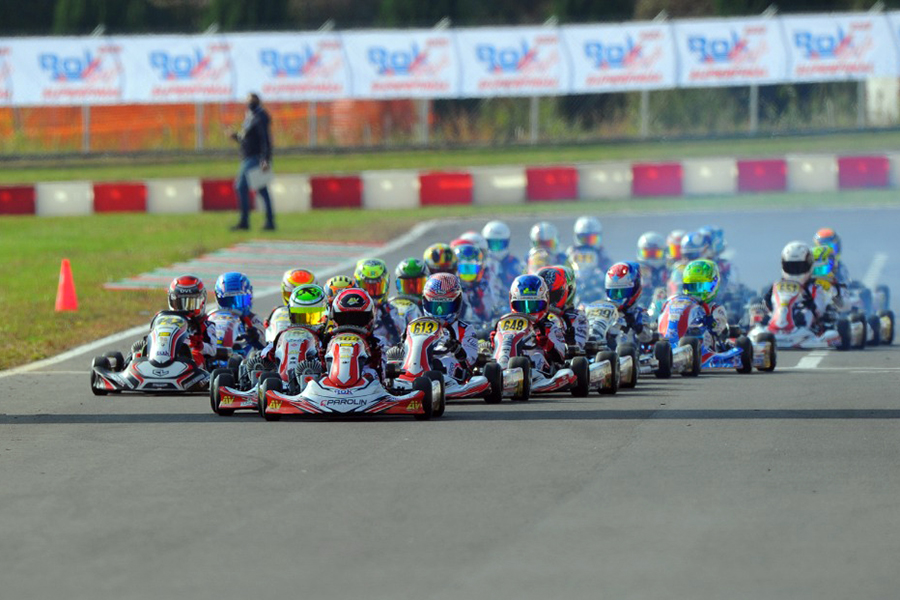 This was really an unforgettable event, despite the particular conditions it took place in. The 2020 Rok Cup Superfinal was not stopped by the health emergency and discovered a new and interesting location, the Franciacorta Karting Track.
The brand-new circuit was the stage of an unforgettable weekend, where Rokkers coming from 30 different Countries challenged each other, as always, in a unique event.
The outcome of the track gave us two confirmations, Marco Chiari (Expert Plus Rok) and Alex Machado (AND- Super Rok) and five new names: Jan Przyrowski (POL – Mini Rok), Riccardo Ianniello (ITA – Junior Rok), Aleksander Bardas (POL – Senior Rok), Renato Jader-David (USA– Expert Rok), and Alessandro Buran (ITA – Shifter Rok).

ALWAYS SPECIAL PRIZES. The prizegiving ceremonies took place, unusually, immediately upon arrival, in full compliance with current instructions. All Rokkers and people present, even if equipped with masks, were bubbling with enthusiasm and satisfaction.
No changes, however, in the prize-money, always amazing and worthy of a great event such as the Rok Cup Superfinal.
All champions were given engines, technical equipment, and the fantastic Super Trophies. Important prizes have been given to all the top five drivers of each rating.

MINI ROK. PRZYROWSKI LEADS THE WILD MINI DRIVERS
The Final is not disappointing the expectations and its 12 laps are exciting. On the first laps, Przyrowski (POL) and Sorensen (USA) stand out brilliantly and take the lead, being able to leave the opponents behind. Gladysz (POL), Peebles (AUS), Matveev (RUS) and Hanna Hernandez (COL) are not giving up and in a few laps, manage to gain ground. A second part of the race is starting this way, full of overtaking and emotions.
In the top group, Gafrarar (USA) is forced to give up the race on the 10th lap, as his rear bumper comes off; black flag with orange circle for the Rokker (who has to return to pits due to mechanical problem).
After several fantastic overtaking, Matveev, Przyrowski, Sorensen, Hanna Hernandez and Gladysz arrive in that order to the final sprint with Lassota (POL) and Peebles (AUS) very close and ready for the fight.
On the final big bend, Przyrowski takes the lead among the five drivers, gaining the 2020 Rok Cup Superfinal Title. Sorensen (2nd) and Gladysz, author of a wonderful last lap, step onto the podium.
The ratings will be officially published after the technical checks on the engines of the first drivers by Vortex (article provided by the regulation and put into effect).

JUNIOR ROK. UNCONTROLLABLE IANNIELLO IS CHAMPION
The first twist takes place at the start of the first lap with Ladina (ITA) who, from the first row, has to follow the group. The young Italian driver is the author of a fantastic recovery, but he is pretty disappointed.
At the starting line, Deligny (FRA) e Douglas (NZL) are both taking the lead in the race; on the third lap, Douglas makes a small mistake and loses the top of the race leaving his place to Deligny and Halatnik, who gets closer to the leaders.
Now a hard fight among Deligny, Halatnik (POL) and Douglas is starting, throughout the first stage of the race. The Frenchman Deligny seems to be ready to gain the right gap from the opponents but, by surprise, Ianniello, from the 13th position, carries out an unbelievable comeback and on the 10th lap (out of 16) he completes his great job and follows in the wake of the leader, overtaking him definitely.
Halatnik has to defend his third position from Douglas, until the two come into contact, Douglas loses his front fairing and has to stop (black flag with orange circle).
For the fourth position, Megna has to control the pressing attacks of Domingues (POR), Carrasquedi (MEX), Ladina and Costa (BRA). At the end of the race, Domingues ends fourth, after some penalties assigned to Megna and Ladina.
Very good performance for Abbate (ITA), ending 7th, able to recover 17 positions and author of the final best lap.
Under the chequered flag, Iannello’s enthusiasm is uncontrollable and the Italian celebrates his well-deserved victory, after starting from the thirteenth position. Also Deligny is on the podium (2nd) together with Halatnik, both very proud about their great performances.

EXPERT. THE TITLE IS ON THE WAY TO USA THANKS TO JADER-DAVID
The American Jader-Davis from the first position takes the lead and gains ground on the whole group.
Exciting brawl for the podium involving Prokscha (DEU), Stadnik (POL), Zampieri (ITA) and Hudec (CZE).
In the tight fight among these four Rokkers, Zampieri is the most penalized, who, three laps to go, is pushed off the track after a contact.
In the last stages of the race, Stadnik gets his own way on his two opponents and he is followed onto the podium by the current champion Prokscha.

EXPERT PLUS. CHIARI REPEATS THE 2018 TITLE
Chiari (ITA) seems to be heading towards an easy success since he manages to keep his most dangerous opponents, Baselli (ITA) and Todeschini (ITA) at a safe distance. On the tenth lap there is a twist, Chiari makes a mistake and the two following him, swoop upon him. The Expert Plus 2018 champion finds his concentration again and centers several best laps, shaking Baselli and Todeschini off again.
Right in the final brawl for second place, Baselli takes advantage of a mistake by Todeschini and conquers the top position. The third place goes, in extremis, to Ardito (ITA), author of a great recovery after being pushed off in the early stages of the race.

SUPER ROK. MACHADO SIMPLY PERFECT
When the traffic lights go out, Hutton (NZL) and Shaw (GBR) enter the brawl, with the New Zealander starting with great determination and taking the lead, followed by Comanducci (ITA).
Muller (CHE), Cicognini (ITA), Martinello (ITA), Shaw and Machado (AND) are behind the leading duo.
Lap after lap, Hutton and Comanducci manage to progressively gain gap from the rest of the group, except from the 2018 champion, Machado. The driver from Andorra is unreachable and overtaking after overtaking reaches the wake of the leaders and halfway through the race he finds himself fighting for the title.
With three laps to go, Machado takes the lead after overtaking Hutton and Comanducci, without giving them any possibility of reaching him again.
With his fantastic victory, Machado repeats the title he won in Super Rok in 2018. For Hutton, the second place is a great result even if halfway through the race the games seemed to turn in his favor. The podium is completed by the Senior Rok 2019 champion, the Italian Comanducci.

SHIFTER ROK. BURAN LEAVES EVERYONE BEHIND
From the first position Buran (ITA) starts amazing and on the first lap he gains a great gap from his opponents.
Behind Buran, Vita (ITA) tries to contain the two Poles, Liwinski and Nadolski. After a few laps, Vita gives way to his both opponents and gives up the chance of getting on the podium.
Liwinski tries to overatke Buran, but the leader responds with a record best lap (best lap of the event 48.245) and gains the title of 2020 Rok Shifter Superfinal Champion.
The top 5 is completed by Vita and Zemin, followed by Tolfo, author of a wonderful comeback.

ROK SENIOR. BARDAS WINS THE FINAL SPRINT ON MONCINI
During the first stages of the race, Bardas (POL) and Hantke (DEU) are fighting against each other for the final victory and manage to gain a wide gap in just a few laps.
Moncini gets rid of Zajac (POL) and Jakub (POL) and sets off in chasing the first two, succeeding on lap 10. At this point, a new race is starting. The fight among Bardas, Hantke and Moncini is very funny, always exchanging their positions and being involved in a few contacts, within certain limits.
The continuous overtaking allow the opponents to reach the first three, making the group of those fighting for the title even bigger right in the final meters with Gaglianò (ITA) and Tyrakowski (POL), Jakub (POL) and Demartis (ITA).
In the final sprint, Hantke makes it on Bardas, who precedes Moncini.
Hantke does not rejoice because he knows that the front fairing of his Rok is out of place and Bardas is Senior Superfinal champion ahead of Moncini and Gaglianò, author of a good comeback from the fifth row.

SPECIAL TROPHIES. The two trophies reserved to the excluded drivers from the Mini Rok (Singha) and Junior Rok (OMP) finals open the program of the final day.
OMP ROK JUNIOR TROPHY. PEDRINI WINS WITH NO HESITATION
Pedrini (ITA) and Koros (SVK) start fighting from the very first lap of the OMP Rok Trophy. They both are left behind by Pedrini, who is unreachable and gains a good gap after three laps, where the leading duo are racing very closely.
In the second half of the race, Roos (ZAF) makes his way, managing to recover Koros in the final stages, while Pedrini takes the lead easily.
After the finishing line, Roos gets a penalty (infraction at the starting line) allowing Koros to gain the second position and Cui (CHN), author of the best lap, to reach the third step of the podium.

ROK SHINGA MINI ROK TROPHY. TARNVANICHKUL WINS. KOBIELA AND YAREMIY SHOW OFF
At the starting line, Tarnvanichkul (THA) and Enache (ROU) are the fastest and take the lead in the race. Soon Tarnvanichkul proves to be unreachable and gains a great gap, setting out for a “quiet” victory.
Then fight for the second place is particularly uncertain with Enache who is reached by Savu (ROU) and by the recovering Paatz (DEU), Saeter (NOR), Yaremiy (UKR), Kobiela (POL) and Prescianotto (ITA).
In the second part of the race, this group is repeatedly exchanging positions and finally, Kobiela e Yaremiy are those gaining the podium, crossing the finishing line in that order, second and third, crowning an amazing comeback from the backlines.