Five Top-Ten Results and a National Title for Team Crosslink 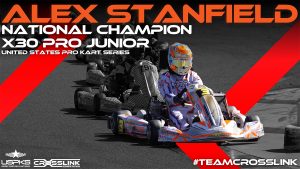 Leaving the GoPro Motorplex in Mooresville, North Carolina after the final United States Pro Kart Series (USPKS) event of 2020, Alex Stanfield delivered Team Crosslink a national title. On the strength of one podium and two top-five finishes, Stanfield closed the weekend with the title and a wealth of momentum ahead of the final event of the season.

With a shot at the USPKS championship heading into the weekend, Alex Stanfield would need a solid and consistent performance to try and get the job done. Standing on the second step of the podium on Saturday and earning a fourth-place result on Sunday, the Team Crosslink competitor was named the X30 Pro Junior United States Pro Kart Series National Champion.

“Alex drove great all series long and was able to put himself in the position to claim the title,” explained Sean Owens. “He pushed when he needed to push but more importantly, he kept his equipment safe and was consistent throughout the three-weekend series. Congratulations Alex!”

While Stanfield provided two of the five top-ten results from Team Crosslink, one other came from the X30 Pro Junior class with Aden Rudolph. Competing against one of the toughest fields of his junior karting career, Rudolph drove to an impressive eighth place result on Saturday. While Sunday provided Rudolph some bad racing luck, Saturday was a hint of what the future holds for the rising star.

Team Manager Sean Owens pushed the paperwork aside to compete in X30 Masters and secured a sixth-place finish in the first wheel-to-wheel action on Saturday. Looking to level up to the top-five on Sunday, contact relegated him down the running order to a thirteenth-place result. Fellow Masters driver Miguel Meir added a pair of top-15 results in his first trip to the GoPro Motorplex.

Reilly Cann was able to claim a pair of solid results in the 40-kart strong X30 Pro class finishing 14th and 17th between the two weekend races. Showing pace to run in the top-ten, Cann stayed out of trouble and took advantage of on track situations to have one of his strongest national races of the season. X30 Pro teammate Ryan Shehan was not happy with his on-track performance and results but vows to rebound in two weeks’ time at the ROK Cup USA ROK the RIO in Las Vegas.

Brayden Robertson impressed in his KA100 Junior program with a ninth-place result on Saturday before gaining seventeen positions in Sunday’s main event to finish 13th and was named the biggest mover of the race. Nicholas Stouffer added 20th and 26th place results.

With the Team Crosslink karting program taking a two-week hiatus until their next event, the team will prepare for their biggest event of 2020. Set to contend at the 2020 ROK Cup USA ROK the RIO in Las Vegas, Nevada over the November 4-8 weekend, the Texas based program will look to finish the season strong.