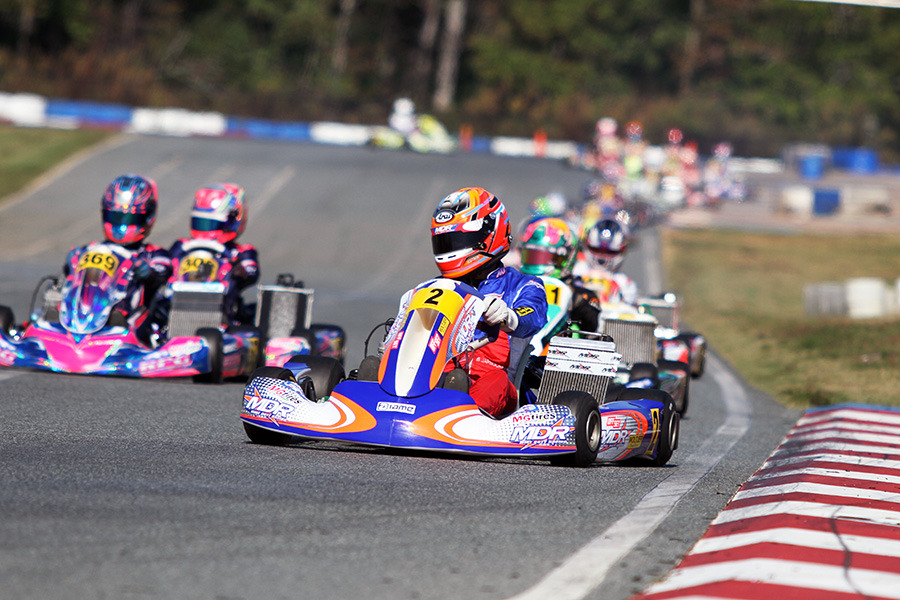 Brandon Jarsocrak won his second of the weekend to help lock up his fourth straight title in X30 Pro (Photo: EKN)

The 2020 season for the United States Pro Kart Series completed on Sunday at the GoPro Motorplex. The Carolina Grand Prix wrapped up at the Mooresville, North Carolina facility on Sunday, contesting the sixth and final round of the championship chase. Weather began with cold temperatures but clear blue skies eventually led to warmer temperatures, perfect for the day’s action to decide the seven championship titles for the 2020 season.

Brandon Jarsocrak had set the bar with three straight championships in the X30 Pro division over the last three seasons. The MDR / Kosmic driver came into the weekend leading the championship, yet not stood on top of the podium. That changed with a win on Saturday, and solidified the championship with another victory on Sunday. It wasn’t a perfect score as Brandon Lemke (FMS / Merlin) set fast time in qualifying. Jarscorak was third behind he and four-time SKUSA Pro Tour champion Ryan Norberg (RPG / Kosmic). Jarsocrak took control in the Prefinal to win and start the main event from the pole position. He led the opening 13 laps of the 24 until Hannah Greenemeier (RPG / Kosmic) helped lead a group up to Jarsocrak. She led for one lap until Brandon took back the point and the battle for second began. Branyon Tiner (RPG / Kosmic) assumed that position and was the driver on the move. Tiner took the lead on the penultimate lap and after receiving the white flag, Jarsocrak took back the top spot going into turn one. Jarsocrak defended the lead through the hairpin and the double rights, making his way to the checkered flag for the victory and his fourth straight USPKS championship. The fight for second went to the line as Lemke slipped past for second with Greenemeier in third, dropping Tiner off the podium in fourth. Norberg was a close fifth, adding Jonathan Portz (RPG / Kosmic) all finishing within one second of Jarsocrak. 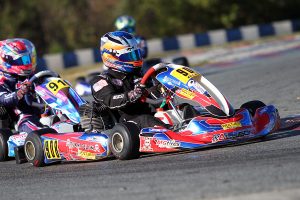 The battle for the KA100 Senior victory was two drivers early on with Hayden Jones (Nitro / Tony Kart) and championship leader Brandon Lemke (FMS / Merlin) posting fast time in qualifying and winning the heat race. The lead group in the Final saw about 10 karts in the mix at one time with multiple lead changes over the 22 laps. Lemke was leading at the halfway point, but was shuffled back to eighth. Up front, Hannah Greenemeier (RPG / Kosmic) led the most laps, from lap 15 to 20 before the intensity was turned up. Arias Deukmedjian (KSNA / Kart Republic) grabbed the point at the white flag but it was Pauly Massimino (MDR / Tony Kart) sliding past at the bowl corner at the end of the long back straight. Massimino held on through the final corners to claim his first win of the season, becoming the sixth different winner on the year. Greenemeier crossed the line second, but received a two position penalty for a pushback bumper, dropping her off the podium to put a clawing Lemke to second and Round Three victor Alex Bertagnoli (KSNA / Will Power Kart) in third. SKUSA Winter Series champion Nathaniel Cicero (RPG / Kosmic) rounded out the top-five, all crossing the line within one second. Jones finished sixth, earning fast lap honors. For Lemke, the fourth straight podium finish gave the Franklin Motorsports driver his first championship in the category, becoming the fourth different champion in four years, and earning his fourth different USPKS in the fourth different category. 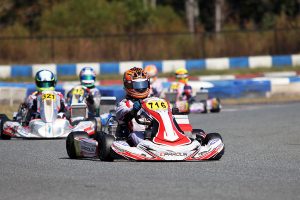 Both days the X30 Junior category provided the best racing of the main events. Sunday was amped up more with a championship on the line. Alex Stanfield (Crosslink / Exprit) and defending champion Brent Crews (KSNA / Kart Republic) came into the day separated by 49 points. Crews helped to close the gap with fast time in qualifying and 10 points. The gap was cut by five more with Crews earning the Prefinal win, but Stanfield finished second to enter the Final leading by just 34 points. The lead group was about seven drivers throughout the 24-lap battle, including 10 lead changes just at the start/finish line alone. The key turning point was on lap 22 when Crews was shuffled out of the lead and fell back to seventh. Leading, he had the championship in hand. Falling back gave the title to Stanfield. Leading the way past Crews was Alessandro de Tullio (Parolin), leading five times over the 24 laps but led the final two, holding on for his first victory of the season. Saturday winner Max Opalski (RPM / Tony Kart) won the fight for second with Thomas Annunziata (TFR / Kart Republic) coming across the line in third. Behind him was Stanfield in fourth and John Burke (Supertune / Tony Kart) fifth, coming all the way from 38th on the grid after a DNF in the Prefinal. Stanfield’s fourth top-five results gave him the championship by 54 points over Crews. 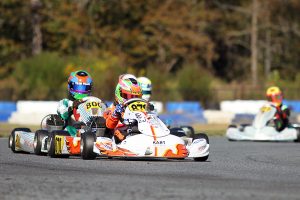 Christian Miles was promoted to the top of the podium in KA100 Junior for his first victory in the class (Photo: EKN)

The KA100 Junior class featured another wild main event to close out the year. Cameron Weinberg (Supertune / Tony Kart) was at the front of the field with fast time in qualifying and edging out to win the Prefinal over Saturday winner Mateo Rubio Luengo (Supertune / Tony Kart). Unlike Saturday, it was more the two drivers fighting for the victory with eight lead changes over the 22 laps. John Burke (Supertune / Tony Kart) was one of the drivers in the lead group, leading before the halfway point until he was shuffled back to sixth as the group was broken up. Christian Miles (KSNA / Kart Republic) and Aiden Levy (Tony Kart) were able to get away but were run down by championship leader Brent Crews (KSNA / Will Power Kart) and Weinberg. They began shuffling for position and that allowed Burke with Dalton Hanes (Tony Kart) to close back in, making it a six driver fight in the final two laps. Burke was able to capitalize on contact for the lead, slipping past everyone to take over the top spot coming to the white flag. Burke held on through the final corners to cross the line as the provisional winner. Burke however was penalized two positions for contact, thus moving Weinberg up to the provisional win. Weinberg was then removed from results in tech, promoting Miles to the top of the podium for his first win in the category. Burke was elevated to second and Crews ended up third, handing him a second straight championship in the category. Thomas Annunziata (TFR / Kart Republic) was fourth with Levy fifth. 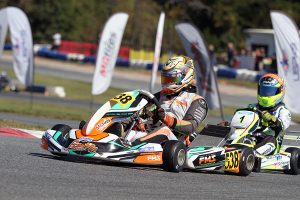 Scott Kopp was handed his fourth win on the year in X30 Masters, securing the series championship (Photo: EKN)

Max Papis was on pace to record a sweep in the X30 Masters class on Sunday after winning Saturday’s action. Papis (Orsolon / Tony Kart) was sitting second behind defending champion David Galownia (TimmyTech / CompKart) until his chain snapped, putting him on the sidelines. Galownia led until Round Four winner Scott Roberts (SCR / Redspeed) took over the point on lap eight. A few laps later, three-time winner Scott Kopp (FMS / Exprit) moved up to second and planted his front bumper on the back of Roberts kart until the last lap. Kopp made his move on the final circuit, leading coming out of the hairpin. Roberts timed a move at perfect time, getting inside of Kopp in the double rights, coming out with the lead. Roberts crossed the line as the provisional winner, only to have the win taken away for a pushback bumper penalty. That promoted Kopp to the top of the podium for the fourth time on the year, finishing the championship title with a victory. Galownia was classified second with Roberts in third. Sean Owens (Crosslink / Exprit) was among the quickest on track but retired with a broken chain while running fourth. Alex Mueller (CompKart) and Danny Robertson (RPG / Kosmic) were fourth and fifth, but pushback bumper penalties of four positions each dropped them out of the top-five, moving Paul Montopoli (CompKart) and Trevor Adams (Tony Kart) into fourth and fifth. 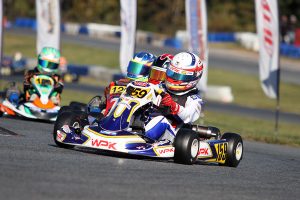 A three driver break away formed in the main event with top qualifier Spencer Conrad (Nitro Kart), Prefinal winner Max Garcia (KSNA / Will Power Kart), and Parker DeLong (Nitro Kart). They shuffled for the top position multiple times, allowing another group of three to close in on the final few circuits. Conrad grabbed the lead from Garcia on the final circuit, but Garcia struck back with a great move and won the drag race to the line by 46 thousandths over Conrad. Cooper Shipman (IRM / Tony Kart) was able to slip past DeLong for third with Matias Orjuela (Parolin) in fifth. The victory was the fourth in a row for Garcia, giving him the title outright. 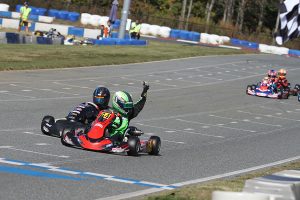 Two wins on the weekend for Cade Jaeger in Micro Swift (Photo: EKN)

The Micro Swift victory went down to the final lap and the final few inches. Isaac Malcuit (AKT / Kart Republic) won the Prefinal and jumped out to a good lead in the main event. He was run down by a group of drivers, and on the final circuit the fight for the win was on. Jack Iliffe (IRM / Tony Kart) took over the lead as they went into the hairpin. At the apex, Iliffe was hit from behind by Ascher Ochstein (Benik), sending him sideways. This allowed top qualifier and Saturday winner Cade Jaeger (Nitro Kart) and Malcuit to slip past. At the line, Jaeger took the victory by 80 thousandths of a second ahead of Malcuit. Iliffe recovered enough to win the race to the line for third ahead of Max Cristea (Magik) and Carson Weinberg (Nitro Kart). Iliffe was able to claim his first USPKS championship.

The 2020 United States Pro Kart Series is completed, with seven drivers ending the season as champions. Record numbers for the first and third events of the eight-year program set the stage for what should be an exciting 2021, with the series expanding back to four events.