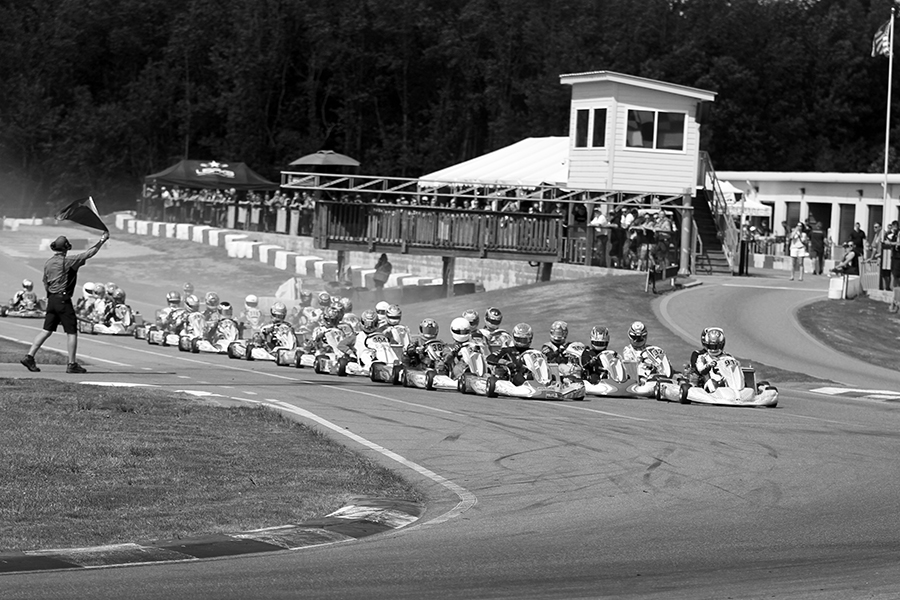 The 2020 United States Pro Kart Series season has been record-breaking. Despite the delay to start the year due to the COVID-19 pandemic, record numbers have turned out for the opening two rounds of the series. The finale is no different, as the USPKS – presented by MG Tires and IAME USA East – will welcome over 200 entries to the GoPro Motorplex for the Carolina Grand Prix event. A total of 208 entries are in the books heading to the Mooresville, North Carolina facility, only the second-time numbers have eclipsed the 200-mark. The first was the 2020 opener at New Castle Motorsports Park, with this weekend on the verge to surpassing the 218-mark set in July 2020.

GoPro Motorplex is the birthplace of the United States Pro Kart Series. The facility opened in late 2012, and the USPKS made its debut in April 2013 as the first major event held around the 11-turn, 7/10-mile circuit. Since then, the USPKS has visited the facility each year with 2020 being the first time that GoPro will host the series finale. The event is also the first time that the USPKS is competing in the month of October. 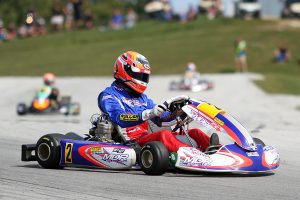 Brandon Jarsocrak is aiming for a fourth title in X30 Pro (Photo: EKN)

Unofficial practice is scheduled for Thursday, October 15. The event officially begins on-track Friday with five rounds of practice to set the stage for two separate rounds of racing on Saturday and Sunday. Each round features a warm-up, qualifying, Prefinal and Final. A $15,000 cash purse for the X30 Pro and X30 Junior categories, along with a slew of free MG Tires for the podium finishers, is on the line during the weekend. The champions for the seven categories will be decided on the weekend, with the awards ceremony taking place at the end of Sunday’s action. The USPKS Winner’s Circle program package, tickets to the 2021 edition of the IAME International Final, and much more will be awarded before competitors head home.

eKartingNews.com is back for the eighth year with United States Pro Kart Series to provide industry-leading coverage from each of the three events for the 2020 season. Those karting enthusiasts not in attendance can listen from home or on the road to the EKN Live broadcast page at www.ekartingnews.com/live with Tim Koyen providing the play-by-play call. Daily reports and updates on the EKN Social Media network will fill up your timeline throughout the weekend. 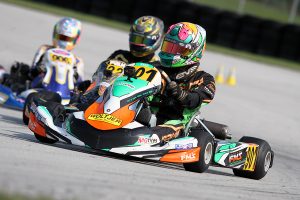 Brandon Jarsocrak is going for his own bit of history. The Mike Doty Racing / Kosmic driver is vying for his fourth straight championship in the X30 Pro division. Jarsocrak, who has yet to stand on top of the podium in 2020, leads the standings by 67 points over teammate Pauly Massimino with three podiums and four top-five finishes. Brandon Lemke was the last champion not Jarsocrak, earning the title in 2016. Lemke (FMS / Merlin) sits third in the standings, scoring three more points than Jarsocrak at Road America last month with two podium results. Jarsocrak was one of two different winners last year, winning at least once over the last three events at GoPro. The only driver to win twice this year is Arias Deukmedjian (KSNA / Kart Republic), securing victories at Round One and Round Four. Deukmedjian sits fourth in the standings, 160 points out of first. Four-time SKUSA Pro Tour champion Ryan Norberg (RPG / Kosmic) is fifth, 196 points back. With all six rounds counting toward the point standings and 260 points plus total number of entries up for grab each round, the championship is not close to being over.

Diego Contecha (Orsolon / Tony Kart) won Saturday in Road America, and will be attempting to join Deukmedjian as a multiple winner on the season. Round Two winner Phil Arscott (KSNA / Will Power Kart) is not on the entry list, however, with the event in his backyard, could be a trackside entry. Joining the fight for their first start of 2020 is Hannah Greenemeier (RPG / Kosmic) and Ashley Rogero (Tony Kart), two of the top female drivers in North American karting. Canadian Thomas Nepveu (PSL / Birel ART) is also set for his first start along with Senior rookie Kyffin Simpson (SCR / Redspeed) who has spent the season racing formula cars. A great story the trumps all of them coming into the weekend is that of Nick Brueckner (Orsolon / Tony Kart), who is making his first event since he was diagnosed with cancer (Ewing sarcoma) in December 2019. After surgery in March, Brueckner has been recovering and is back behind the wheel for the first time in 2020. 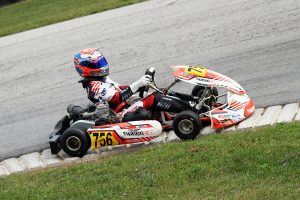 The championship for the KA100 Senior category will go down to the wire with 40 drivers set to start this weekend. Eyes for the championship chase are on Brandon Lemke (FMS / Merlin). Lemke put himself into the top spot of the standings with a sweep victory at Round Four capping off four top-five finishes. Round One winner Arias Deukmedjian (KSNA / Kart Republic) sits second, 71 points out of first while Round Three victor Alex Bertagnoli (KSNA / Kart Republic) is 115 points back. Luke Selliken (RPG / Kosmic) has four top-six results to sit fourth while Hayden Jones (Nitro / OTK) remains in the title chase.

With 40 drivers in the field, there are several drivers looking to upset with victories of their own. Pauly Massimino (MDR / Kosmic) will go double duty despite his battle for the X30 Pro title at hand. Mike McAndrews (Fullerton USA) has success at GoPro as does 2019 winner Brooke Nachtmann (Tony Kart) and 2019 champion Blake Hunt (KSNA / Kart Republic). Hannah Greenemeier (RPG / Kosmic) is going double duty in her USPKS 2020 debut with 2019 SKUSA Pro Tour champion Austin Osborne (IRM / Kosmic) coming off victory at New Castle and two big races in Texas. A new name to the category is two-time SKUSA Pro Tour champion AJ Myers (Magik), as the Florida driver now resides in North Carolina. 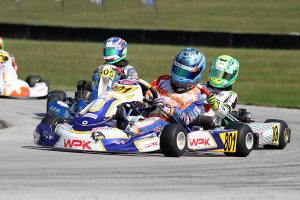 Brent Crews was able to claim both Junior titles in USPKS competition for 2019. Crews (KSNA / Kart Republic) is in line to battle for both championships once again. In X30 Junior, Crews trails Jace Park (SCR / Redspeed) by just five points, and tied with Alex Stanfield (Crosslink / Exprit). Crews holds the advantage in the win column, as the only one of the three with a victory in the first four rounds. Connor Zilisch (LAK / Redspeed) won the opening two rounds with John Burke (Supertune / Tony Kart) the other winner for 2020. Zilisch is in Europe, having just clinched the FIA Academy Trophy championship and preparing for the FIA World Karting Championships in OK Junior. Burke sits fourth in the point standings, only 74 markers out of the top spot. A total of eight drivers are within 186 points of the championship that still have a mathematical shot at the title. Thomas Annunziata (TFR / Kart Republic), Paul Bocuse (SCR / Redspeed), Jack Jeffers (SCR / Redspeed), and Max Opalski (RPM / Tony Kart) join the other four in the hunt. 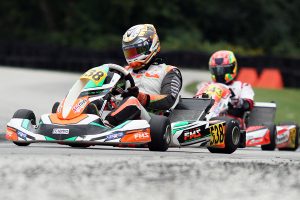 Crews does lead the championship standings in KA100 Junior. He holds a 36 point advantage over fellow North Carolina resident Westin Workman (TimmyTech / CompKart). Both Crews and Workman won last year at GoPro, and Crews has one victory in the four rounds of 2020. All three other winners on the year – Logan Adams, Mateo Rubio-Luengo and Carson Morgan – are not entered for the finale. Christian Miles (KSNA / Kart Republic) is making it a three driver fight for the championship, only 79 points out of first. Thomas Annunziata (TFR / Kart Republic) and Aiden Levy (Tony Kart) remain in the chase mathematically, needing help on the weekend. John Burke (Supertune / Tony Kart) has been strong all 2020, but had a win taken away at New Castle. He will be among those to spoil the fun along with Noah Baker (Supertune / Tony Kart), local driver Sam Corry (Redspeed), and Austin Jurs (Franklin / Redspeed). 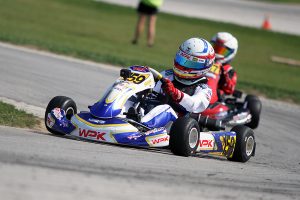 The X30 Masters title chase is essentially down to two drivers. Three-time winner Scott Kopp (FMS / Exprit) holds a 143-point lead over Round Four victor Scott Roberts (SCR / Redspeed), as both are seeking their first USPKS crown. Former champions Cristian Vomir and Laurentiu Mardan under the TecnoKart USA tent still remain in the chase mathematically, sitting third and fifth along with GoPro local Alex Mueller (ACM / CompKart). Defending champion David Galownia (TimmyTech / CompKart) fell out of the championship race with a DQ in Round Four, but will be among those fighting for the win. Also, in the fight are new drivers, including ‘Mad’ Max Papis (Orsolon / Exprit) the 2013 US Rotax Grand Nationals winner at GoPro. Another driver who found success then was Sean Owens, set to make his USPKS debut in X30 Masters. Owens (Crosslink / Exprit) finished second in the DD2 category seven years ago.

Max Garcia has put himself in the championship lead following the two wins at Road America. Garcia (KSNA / Will Power Kart) holds a 17-point lead over Round One winner Matias Orjuela (Parolin). Cameron Brinkman (Franklin / Merlin) slips between him and Round Two victor Cooper Shipman (IRM / FA Kart) in the championship chase, with Parker DeLong (Nitro Kart) still among those with a chance. Nitro Kart will have a slew of drivers in the hunt on the weekend, including recent US Rotax Grand Nationals and CKNA Grand Nationals winner Ben Maier, Spencer Conrad and Aryton Grim. Kai Johnson (AKT / Energy) could be another driver to watch on the weekend. 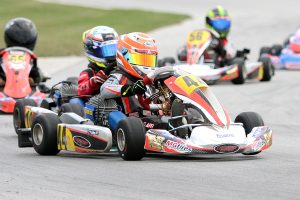 Four drivers enter the finale weekend with a chance at the Micro Swift title. Two-time winner Jack Illife (IRM / Tony Kart) leads the standings by 60 points over Round Four winner Carson Weinberg (Nitro Kart). Newcomer Vivek Kanthan (MDR / Kosmic) is back by 82 points with Asher Ochstein (Benik) trailing by 140 points. Cade Jaeger (Nitro Kart) won Round Three, and is heading to the finale along with the top two from the US Rotax Grand Nationals Isaac Malcuit (AKT / Kart Republic) and Keelan Harvick (Nitro Kart), son of NASCAR champion Kevin Harvick.

Be sure to follow EKN all weekend long as we bring you live updates, images, videos and more through the EKN Social Media network as the United States Pro Kart Series completes the 2020 season at the Carolina Grand Prix.