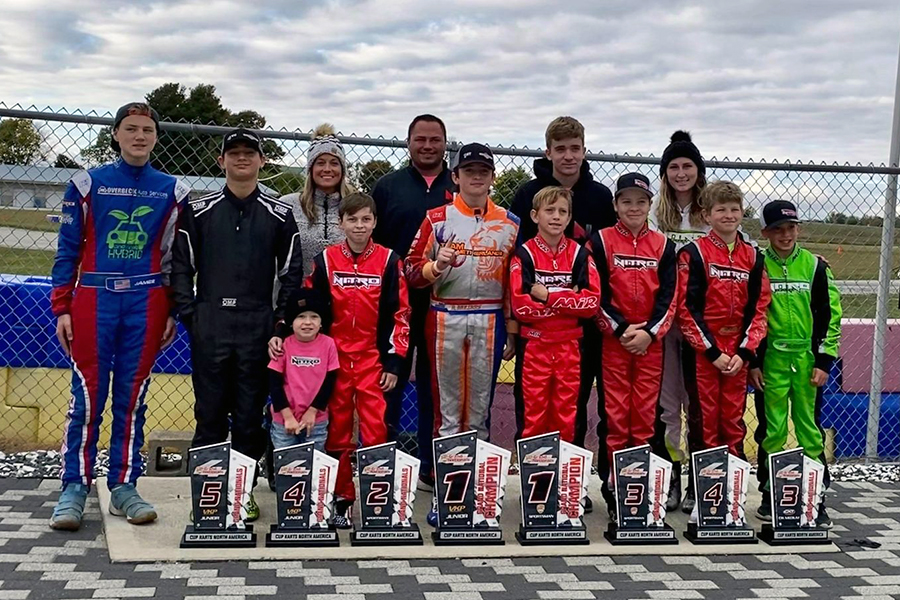 Team Nitro Kart continued with their solid 2020 season, taking part in the Cup Karts North America Grand Nationals 4 at the New Castle Motorsports Park on October 2-4. Nitro Kart won three main events in the 2019 edition, and returned to the New Castle, Indiana facility searching for more victories and podium finishes. After the final checkered flag waved, Team Nitro Kart recorded two wins, and a total of nine podium results, including a sweep of the top-five in the Sportsman division. 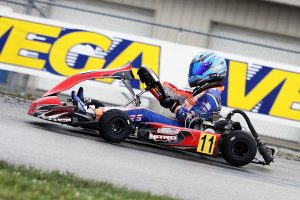 Former national champion and Nitro Kart driver Brent Crews rejoined the team in a late entry for the Junior division, competing with the ‘Lefty’ chassis. Crews qualified eighth and remained one of the top drivers through the heat races with a win and two runner-up results to secure the outside pole position for the main event. In the rain, Crews led the front half of the race until getting shuffled back to third at the mid-way point. He returned to the top spot two laps later and was able to negotiate both the wet track and lap traffic to remain in the lead until the checkered flag. The win adds to his long list of victories, many of which were with Nitro Kart in his Cadet career.

Team Nitro Kart had three drivers land on the podium in the Junior category. James Overbeck was the top driver under the tent in qualifying, finishing the session in fourth. Racing aboard an OTK chassis with Team Nitro Kart support, Overbeck had heat race results of 1st, 2nd and 3rd to start from P3. Danny Dyszelski, another driver on OTK product under Team Nitro Kart, improved from a 14th qualifying result to earn a P4 starting position, putting three Team Nitro Kart drivers on the front two rows. Dyszelski drove to fourth in the main event with Overbeck placing fifth. 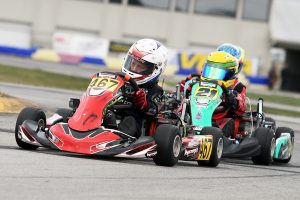 Nitro Kart dominated the Sportsman division from start to end. Ben Maier led the way in qualifying, setting fast time to lead Nitro Kart, which had nine drivers in the top-10. Nitro Kart swept the six heat races, led by Parker DeLong with three victories, Maier with two, and two-time defending champion Aryton Grim scoring the wins. The main event saw three Nitro Kart drivers pull away from the rest of the field, including DeLong, Grim and Maier. DeLong lost the draft toward the end of the race, letting the other two battle to the checkered flag. At the line, Maier edged out Grim by 34 thousandths for his first CKNA victory. DeLong finished third but mistakenly had on his practice instead of race tires, and thus was removed from the results. Fellow Nitro Kart drivers stepped up to complete the podium with Spencer Conrad in third, Christopher McKeithan fourth and Cade Jaeger in fifth. Caleb Tarter gave Nitro Kart six drivers in the top-10 to close out the category.

The Nitro Kart ‘Lefty’ chassis was at the front all weekend long in the Senior divisions. Hayden Jones put down the quickest lap in the CIK Medium division, featuring 78 drivers. A questionable call in the opening heat race took the provisional win from Jones and put him to the back for the second round of heat races in the progressive format. Jones put in the work in the remainder of the event, coming from 33rd to 12th in 14 laps during the main event. Ashley Rogero took over the lead for Nitro Kart after Jones’ misfortune, recording three top-five results in the heat races to end up starting fourth in the main event. Rogero was among those in the lead group all race long, and won the battle for third at the line. 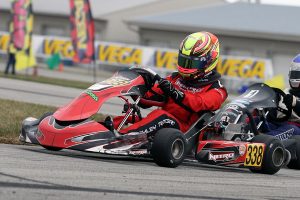 “I am very proud of all the drivers we had under the tent at the Cup Karts North America Grand Nationals 4,” commented Nitro Kart owner Nick Tucker who won the 2019 CKNA Grand Nationals in the Masters class aboard the ‘Lefty’ chassis. “Our 4-cycle program is among the best in the country for both Senior, Master, Junior and Sportsman, and the results show with five victories in two years and dozens of podium results. The hard work and effort put in by the drivers, mechanics, coaches and families is what got us to this point. We are excited to add more trophies to the 2020 record and end the season strong while we eye on more success in 2021.”

Nitro Kart will defend its home turf in North Carolina at the GoPro Motorplex facility during the United States Pro Kart Series event on October 16-18. The Carolina Grand Prix is the final two rounds of the 2020 points chase with Team Nitro Kart drivers gunning for positions on the championship podium.