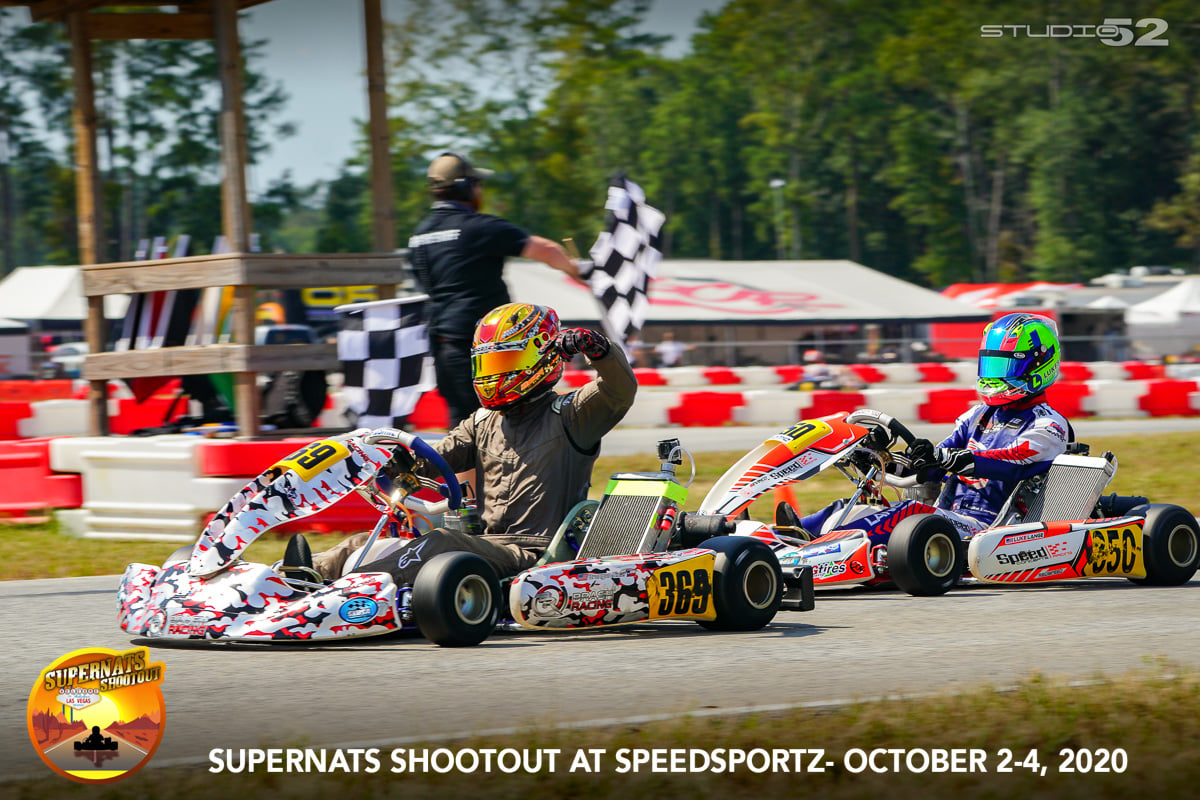 Speedsportz Racing Park in Houston, Texas is one of the finest karting facilities in America, yet the track is still in line to host its first major national event. EKN has learned that track co-owner Alan Rudolph may get that big event in 2021, but ahead of any potential announcement, the veteran driver and racing instructor took the matter into his own hands and worked with Superkarts! USA Tom Kutscher to promote his own event to cap the 2020 season. The inaugural ‘SuperNats Shootout’ was originally designed as a tune-up for the SKUSA SuperNationals in Las Vegas, and after working with Kutscher to set up entry packages for this year’s Las Vegas extravaganza for all of the event winners, it was disappointing to hear that the race has been cancelled for this year. Rudolph had commitments for major teams like Speed Concept Racing and Crosslink Competition, and with a clear plan to make this an annual event, the race was green flagged to continue. The SuperNats entries would now be used for the 2021 edition of the race. The entry numbers were not massive, thanks to so many events filling the late September calendar, but the atmosphere of the event was super positive and will no doubt lay the groundwork for the future. 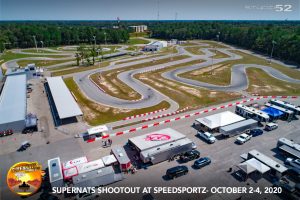 Rudolph was approached by Speedsportz racer and business Scott Ferguson of Ferguson Truck Center to help raise the bar for the race with an impressive $20,000 purse, and that was the starting point. Brash Racing then stepped in to offer up $2000 in prize money for qualifying, taking things to the next level. When added to the entry packages for the SuperNationals for all of the winners, this cash certainly elevated the race’s pedigree. As a planned SuperNats tune-up event, all of the SKUSA national categories were offered and the racing was spectacular.

Full Gas Motorsports’ Jake French (Birel ART) dominated the Senior Shifter main event, pacing all 24 laps to take home the $1500 first place check. Austin Wilkins (Birel ART) needed to get past Masters Shifter leader Ryan Kinnear (Ricciardo) to get into second overall, and even after he did, Wilkins would come up just a half lap short, as an engine issue put him on the sidelines at the end of the backstretch on the final circuit. 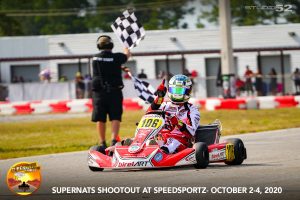 This moved Graig Alvarez (Birel ART) and Andy Cantu (Birel ART) into second and third, until a technical infraction removed Alvarez from the results and advanced Cantu to second, bringing Wilkins back on the podium in third. Kinnear ran among the top Shifter Senior drivers to win Master Shifter and the $500 winner’s check. Vincent Crossard (CRG) finished second, battling with senior drivers within the overall top-five as well.

The X30 Senior main event turned into a one-on-one showdown between polesitter Luke Lange (Redpseed) and Branyon Tiner (Tony Kart). Each spent time up front, but Tiner wrestled away the lead in the late going and was able to hold off Lange on the final lap to take the $1500 win. Lange followed Tiner across the line, while Ryan Shehan (Exprit) finished third, having run by himself for the entire 24 laps. Shehan was quick but was just a couple tenths off on outright pace and couldn’t quite stay with the leaders. Reilly Cann (Exprit) and Jeshua Alianell (Birel ART) completed the top-five. 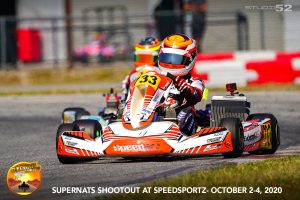 Jack Jeffers came out on top of a battle with Paul Bocuse and Noah Baker for the win in X30 Junior
(Photo: Ken Johnson – Studio 52)

In X30 Junior, a three-driver battle developed up front between Paul Bocuse (Redspeed), Jack Jeffers (Redspeed) and Noah Baker (Tony Kart). Over the second half of the 20-lap race, Bocuse took the point, but the last two laps turned into an all-out scrap for the victory. Bocuse and Jeffers swapped the lead on several occasions and the race ended up being decided in the turn 14 hairpin when Jeffers was able to hold off Bocuse’s attempt for the win. Jeffers won the race to the line by 0.876 seconds while Baker finished 1.136 seconds back in third. Aden Rudolph (Exprit) and Cole Kleck rounded out of the top-five.

The combined KA100 Senior / Masters group featured a pair of dominant winners. Austin Osborne (Tony Kart) and Miguel Mier (Exprit) completed perfect sweeps of their sessions on Sunday, winning in the main event as well. In the KA100 Senior class, Osborne got away from his competition early and simply pulled away to win by 6.506 seconds, earning $750 and his entry into the 2021 SKUSA SuperNationals. The fight for second was the entire show, as Brooke Berry faced off with Josiah Tracy for a majority of the race. Things changed when John Berry (Tony Kart) arrived on the scene, first working past Tracy and then his sister, Brooke. 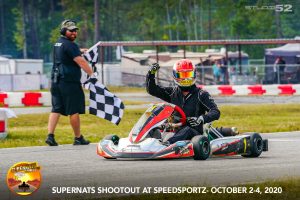 John wasn’t able to get away however, as Brooke was aggressive on the final lap trying to get back to second. She made a move in the hairpin turn 11 but could not complete the pass, and then had to hold off Tracy in to the run to turn 13. John used the opportunity to pull a small advantage to finish second while Brooke held off Tracy for the final positon on the podium. Eric Sepulveda battled with Clark Toppe (Exprit) throughout the race and eventually took the final spot in the top-five.

In the KA100 Masters class, Mier was the class of the field, winning by 16.158 seconds over James Lundberg (Birel ART). David Pergande (Tony Kart) took third in the final tally, while Doug Foxworth retired on lap eight. 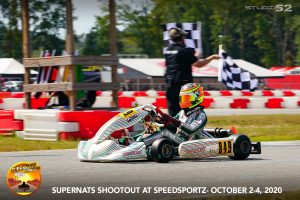 A two-driver battle highlighted the KA100 Junior main event on Sunday, but it wasn’t for the lead. Noah Baker (Tony Kart) started on the pole and jumped out to the early lead, while Cameron Weinberg (Tony Kart), Cole Kleck and Peyton Phillips lined up for a time in attempt to reel in the leader. The only issue was that everyone wanted to lead the chase group, and the non-stop back and forth overtaking allowed Baker to pull away. Weinberg was eventually dropped from the trio, but even when Kleck and Phillips finally lined up, it was too little, too late. Baker cruised to a 2.211-second victory, while Kleck came away with the second spot ahead of Phillips. Weinberg finished fourth and Jake Faulkner (Birel ART) capped the top-five. 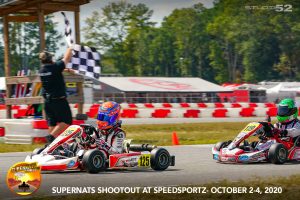 Early race action in the Mini Swift class depleted the line-up during the first two laps as contact between Landon Skinner and Carson Weinberg (Tony Kart) eliminated both drivers by the end of the third lap. Austin Roy was the next casualty, as a broken wheel hub sent him spinning off the track in turn seven while leading. This opened the door for Ragan Saville (Birel ART) and Davis Cunningham (Birel ART) to wage a 16-lap battle for the win. Saville led for a majority of the laps but, over the final circuits, the race was on as the top-spot was swapped on more than one occasion. In the end, Cunningham came away with the win after a valiant last-ditch effort by Saville in the turn 14 hairpin left him a little too deep into the corner, which allowed his challenger to perform the over-under and win the drag-race to the checkered flag. Cunningham won by 0.135 seconds over Saville, while Santiago Duran (CRG) completed the podium. 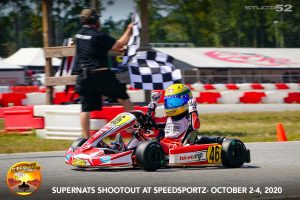 Bobby Klein took control of the Micro Swift early and drove away to the victory
(Photo: Ken Johnson – Studio 52)

The energy of the Speedsportz paddock and vocal support for all of the top-three drivers was on display at the podium presentations, as Rudolph handed out the trophies and the SuperNationals tickets. Karting in Texas is certainly alive and well and its definitely blessed to have a facility like Speedsportz as part of its foundation.