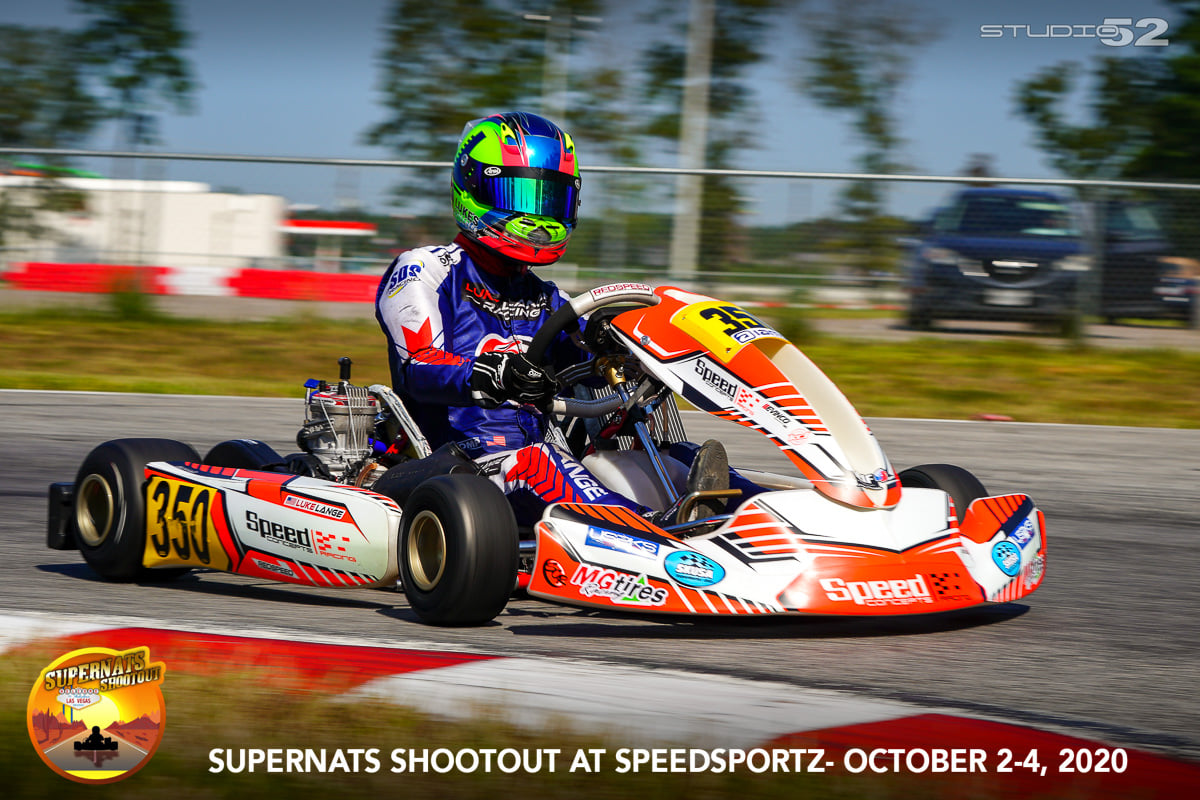 The inaugural SuperNats Shootout at Speedsportz Racing Park puts its first official sessions in the books on Saturday at the 15-turn New Caney, Texas facility. The event was initially designed to be a tune-up race for the SKUSA SuperNationals with entry packages to the annual Las Vegas event among the impressive prize package. Even with the cancellation of this year’s SuperNats, Speedsportz’ Alan Rudolph stuck with the event and added more sponsors during the late hours. Ferguson Truck Center backed the stellar $20,000 purse and then Brash Racing stepped up to add $500 pole checks to the top qualifiers in both Senior Shifter and X30 Senior. Qualifying and the first two rounds of heat were completed on Saturday in absolutely-perfect weather, with cloudless blue skies and temps in the low 80s.

EKN #1 Jake French (Birel ART) topped Senior Shifter qualifying, which featured a 20-minute hot pit session that allowed for on-the-fly adjustments or tire changes. While no one opted to run two sets of stickers, the shifter drivers hung out in put lane until the halfway point, and then went to work with French laying down the quickest lap to win the $500. 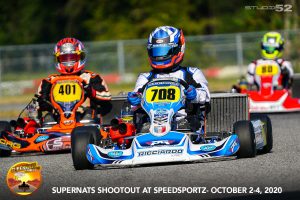 Masters Shifter driver Ryan Kinnear took his class wins in both heat races, but also took the overall victory in Heat 2 after Jake French and Austin Wilkins got caught up in an incident
(Photo: Ken Johnson – Studio 52)

In the second shifter heat, things changed drastically for French and Wilkins after contact in turn 11 on lap 2, due to French’s engine baulking as he went back to power. Both drivers came to a complete stop in the incident and then re-fired well back, as the rest of the field streamed away. This opened the door for Kinnear to pull away from the overall win, while Alvarez topped the Senior Shifter results in second overall. Crossard was strong and finished third to Alvarez, holding him off for several laps to make it a 1-3 for the Masters drivers. The remainder of the top-five in Senior saw Landon Wilkins (Birel ART) in second, Cantu in third and Milne in fourth. French made up a ton of ground over the final 12 laps to steal fifth on the final circuit. 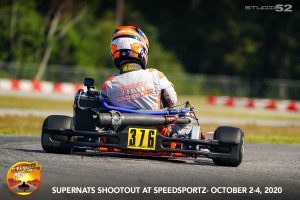 X30 Senior was much more exciting in hot pit qualifying as Branyon Tiner had the top spot for a majority of the session. Speed Concept Racing’s Luke Lange (Redspeed) sat second early but came in to make a carb adjustment and then during his second stint on-track, he closed to within 0.016 of the second. On the very next lap, he dropped another three hundredths to go 0.017 faster than Tiner to steal the pole and the $500 that came with it. Crosslink Competition’s Ryan Shehan (Exprit) made it exciting at the end but he came up just short, sitting third, as the top-three were separated by just 0.069 seconds at the end of the 20-minute session.

In the opening heat race, Lange stretched away to the win over Tiner and Shehan. Crosslink’s Reilly Cann (Exprit) overcame an issue in qualifying to advance to fourth, ahead of Jeshua Alianell (Birel ART) and Kenny Elwood (CRG). In Heat #2, Tiner was hit with jumpstart penalty that would drop him to fourth in the final tally, but the racing was exciting as Lange fell to fourth at the start. Shehan took the lead from Tiner at the end of the backstraight on lap 3 but the duo would swap the spot on more than one occasion. Lange eventually came back forward to take the win, and Shehan again went back by Tiner to finish second. Cann showed better pace to make it four drivers in the lead group, and he finished fourth on the track but was moved to third with the three-second penalty assessed to Tiner. 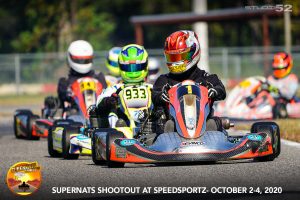 Austin Osborne has his way with the KA100 Senior field on Saturday, qualifying on pole and winning both heat races
(Photo: Ken Johnson – Studio 52)

Top qualifier Austin Osborne (Tony Kart) dominated both the KA100 Senior heat races, letting all the action take place behind him. The fight for second kept the paddock on their feet as the brother-sister duo of John and Brook Berry (Tony Kart) were able to get by Travis Wiley (Compkart) to finish second and third. Wiley ended up fourth while Clark Toppe (Tony Kart) was fifth. In the second heat, Josiah Tracy emerged in second as John Berry passed sister Brooke in turn six late in the race, opening the door for Tracy to slip past both Berrys to take the spot. Wiley went backwards from the start and when paired with a three-second jumpstart penalty, he dropped to the tail of the results. He’ll be looking for a crucial recovery result in the third heat on Sunday.

In KA100 Masters, Crosslink’s Miguel Mier (Exprit) dominated the action over David Pergande (Tony Kart). After qualifying on pole, Mier jetted away to a pair of commanding victories in the heat races. Pergande was second in booth motos, while Doug Foxworth (Compkart) and James Lundberg (Birel ART) diced it out throughout both races, swapping third on many occasions. 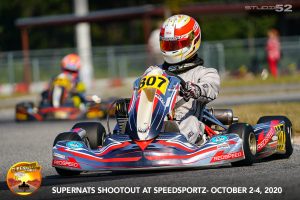 Noah Baker (Tony Kart) was the fast qualifier in KA100 Junior, and he took the win in Heat #1 over Cameron Weinberg (Tony Kart) and Peyton Phillips (Redspeed). Cole Kleck (Tony Kart) and Jake Faulkner rounded out the top-five. Phillips was the man on the move in the second heat, turning quick laps to catch the duo of Baker and Weinberg for the lead. Phillips eventually took over the point and left the rest of the group to fight it out for position. Kleck worked his way back until into the scrap as Baker and Weinberg were fighting for position, and after Kleck was moved off the track in turn 14 by Weinberg, the resulting avoidable contact penalty dropped Weinberg to eighth. 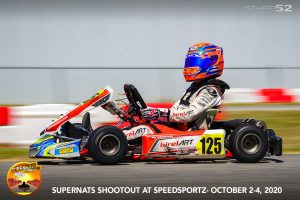 Speedsportz’ David Cunningham (Birel ART) topped the Mini Swift field in qualifying and then proceeded to win the opening heat race over his teammate Austin Roy (Birel ART). Ragan Saville (Birel ART), Santiago Duran (Kart Republic) and Carson Weinberg (Tony Kart) capped the top-five. In the second race, the scrap for the lead was a little more intense as the fight came down to the final run through the turn 14 hairpin. Roy made a strong move to take the lead but contact behind him allowed Landon Skinner to bob-and-weave his way through those involved to take second. Saville held on for third while Diego Guiot also slipped through to finish fourth ahead of Cunningham. 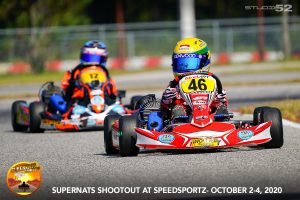 The Micro Swift drivers are in for a weekend-long fight for the win on Sunday, as Speedsportz’ Bobby Klein topped the second heat
(Photo: Ken Johnson – Studio 52)

Gage McNelis and Bobby Klein (Birel ART) split with the heat race wins in the Micro Swift class. Klein scored the pole in qualifying and then battled all race with McNelis and Jackson Baldus (Formula K), who came on midway to eventually take the final. In the end, McNelis got back to the front to win over Klein and Baldus, while Davis Henry completed the field in forth. In Heat #2, Klein walked away for the win with McNelis in second, Baldus and Henry were again third and fourth.

The drivers will be back at it again on Sunday for the final round of heats and the main events in the afternoon. EKN will begin the live audio coverage at 10:15 pm CT with the third round of heat and will start the main event broadcast at 12:30 pm.