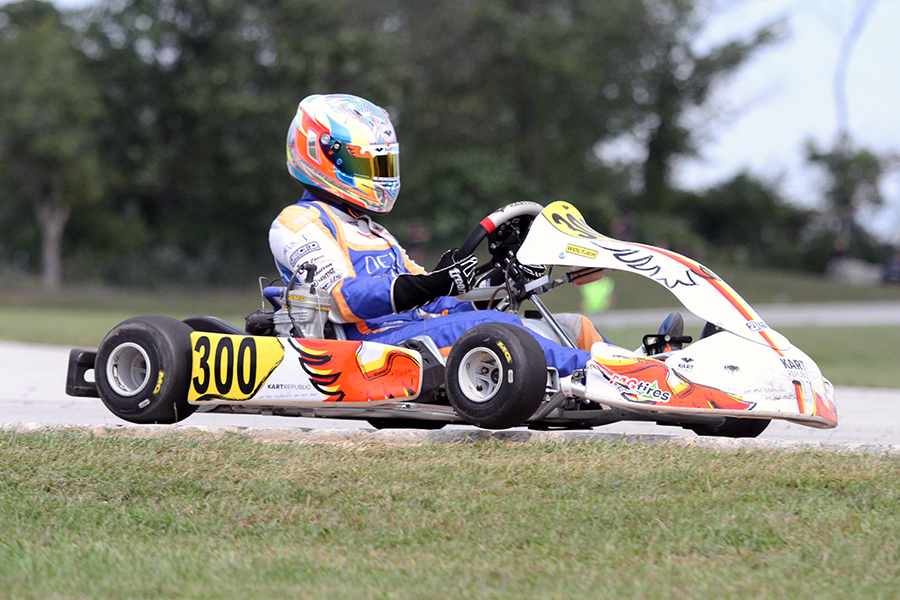 The 2020 season is nearing the end as the month of October is just around the corner. The events counting toward the EKN TaG Driver Rankings is diminishing as well, with only a handful of events remaining on the calendar. The cancellation of the SKUSA SuperNationals 24 in Las Vegas could be a major factor, and the addition of the USPKS ending in October will shape the final standings as we close on the end of the 2020 season. While events took place over the last month, no one was able to move or lost positions in the top-10.

A slight improvement in his score thanks to victory at Road America, Arias Deukmedjian (KSNA / Kart Republic / WPK) remains at the top of the EKN TaG Driver Rankings. A win at the United States Pro Kart Series Badger State Grand Prix helped to pad his lead and lower the average finish position for the 2020 season. Senior rookie Luca Mars (SCR / Redspeed) was among those in contention in Wisconsin, however, did not better his score and remains in the second position. Four-time SKUSA Pro Tour champion Ryan Norberg (RPG / Kosmic) keeps hold of the third spot in the standings despite no improvement in his score. Norberg did add to his resume, picking up the ROK Fest West victory in Sonoma on September 20.

The 2020 SKUSA Pro Tour double champion Bryson Morris (RPG / Kosmic) has been on the sidelines since the Summer Festival in New Castle. Morris is currently healing a rib injury and remains on the sidelines, but did take in some car testing in recent days. Holding the fifth position is three-time defending USPKS champion Brandon Jarsocrak (MDR / Kosmic). The ‘Shillington Slingshot’ has gone winless in the four rounds of the program but remains the championship leader heading into the series finale, set for October 16-18.

Hannah Greenemeier puts three Rolison Performance Group drivers into the top-six. Greenemeier remains one of the top drivers in the country, and has emerged as one of the best female karters in the last decade. She continues to develop as a driver, competing in both TaG and shifterkart competition. Taking a break from his Road to Indy schedule, Braden Eves (KSNA / WPK) made eight starts in July and August to put himself seventh in the EKN Driver Rankings. Eves had his IndyPro 2000 season cut short during a Labor Day weekend race at IMS when his car flipped. The Ohio driver is currently recovering from fractured vertebrae after two days in the hospital.

Veteran driver Phillip Arscott (KSNA / WPK) had a similar performance in July and August as Eves, coming back to the national stage. The former US Rotax Grand Nationals champion is eighth in the standings with a win at USPKS the best result. Canadian Thomas Nepveu (PSL / Birel ART) is ninth, riding on string of top-10 finishes at the SKUSA Summer Festival, also earning the ROK Fest East win at the beginning of August. Closing out the top-10 is Pauly Massimino (MDR / Kosmic). The 2019 SKUSA SuperNationals KA100 Senior winner is currently second in the USPKS standings behind Jarscorak, looking to battle for the title at his home track in Mooresville.

Brandon Lemke (FMS / Merlin) nearly broke into the top-10 following his two podium performance at the USPKS Road America weekend, moving up to 11th. Dante Yu (J3 / CompKart) was another former top-10 driver moving up in the standings with a top-five result at the US Rotax Grand Nationals. 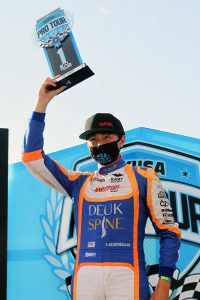 The second-year Senior driver remains at the top spot of the EKN TaG Driver Rankings. Deukmedjian improved his point total by six points from August with the victory at the USPKS Road America event. The win also improved his average finish, showing the solid 2020 Arias has put in. More victories are possible ahead with the USPKS coming to the home of his KartSport North America team with the Kart Republic / Will Power Kart driver vying to be the first new #1 in four years. 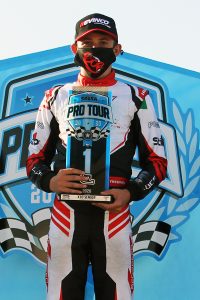 The new US Rotax Grand Nationals champion remains at the second position of the EKN TaG Driver Rankings. Mars had a solid two days in Charlotte for his second straight Rotax title, earning the Stars & Stripes Open victory in Junior Max last year. This makes a fourth time in five years as part of Team USA for the Rotax Grand Finals as the United States is still waiting for its first world title in the Senior Max division. Mars’ position near the top of the standings will hold through until August 2021 with his strong top-six performance in six rounds of racing at the 2020 SKUSA Pro Tour Summer Festival. 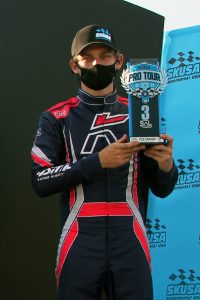 The drive to finish a fourth straight year at the top of the EKN TaG Driver Rankings continues for the four-time SKUSA Pro Tour champion Ryan Norberg. Going winless for the first time on the SKUSA season kept him from earning a fifth-straight title, but the Rolison Performance Group driver continues adding to the CV. Winning the SKUSA Winter Series title in February, Norberg just won the ROK Fest West in Sonoma to add another trophy to the mantel. An impressive performance at the USPKS finale could be the move to put Norberg at the top dependent on the unknown of November.