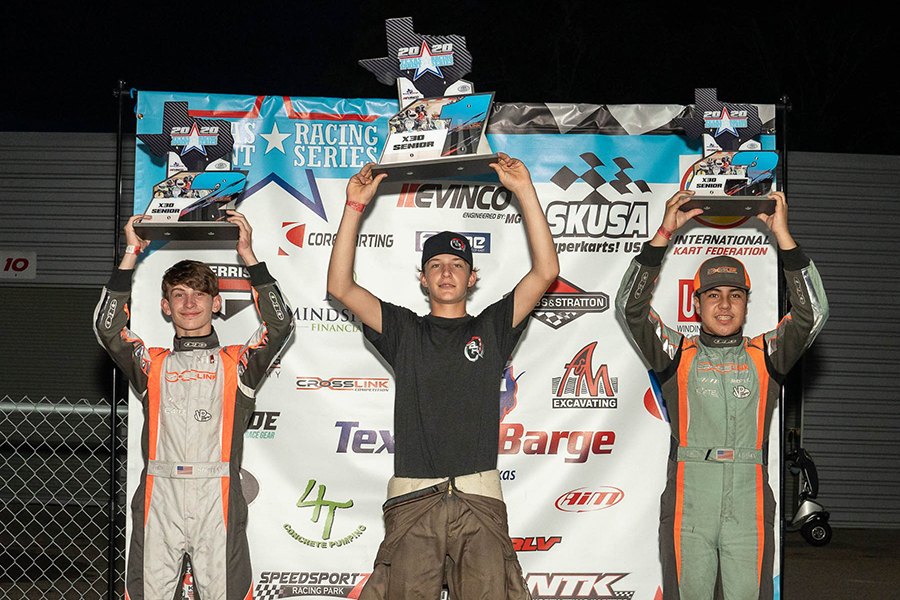 The Texas Sprint Racing Series program closed out the 2020 season on September 11-13, hosting its fifth and final round at the Speedsportz Racing Park in New Caney, Texas. The COVID-19 pandemic shuffled up the season’s events following the opening ‘Winter Warm-up’ round at NOLA Motorsport in New Orleans in early March, as the April event at Gulf Coast Kartway was cancelled, and the second event was moved to Speedsportz in June for the Summer Shootout. The Midsummer Mashup featured two rounds of racing at North Texas Kartways in July. All that set up a final run for the championships at the 2020 finale.

This year’s championship chase featured several ties for the top position after factoring in the best four of the five rounds of competition. The 2020 prize package for the Texas Sprint Racing Series was just over $36,000 in prizes. 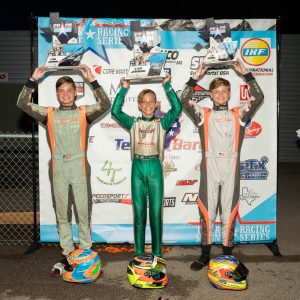 Three straight victories helped guide Branyon Tiner to the top of the championship podium in X30 Senior by Crosslink Competition. The Senior rookie won the final three rounds, including both at the NTK double header, and nearly sweeping the finale round. Round Two winner Ryan Shehan finished third at the finale to clinch the second step with Adrian Cruz ending third, putting three Senior rookies on the championship podium.

Noah Baker was the only driver in the X30 Junior by Mindshift Financial to claim two wins on the season as he swept the finale at Speedsportz. Last year’s champion Alex Stanfield won Round Three and placed runner-up both rounds at the finale weekend. Factoring in the drop round, Baker and Stanfield tied for the top spot in the championship, with Baker earning the title off the tie-breaker. Aden Rudolph finished third in the final round to move himself up to third in the final point standings. 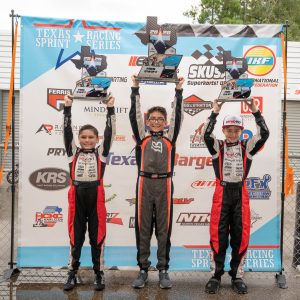 After four rounds of racing, the Mini Swift by Alan Rudolph Racing Academy category saw four different drivers at the top of the podium and a close championship chase. A near perfect day in Round Five for Cooper Shipman gave him his second straight victory and boosted him to the top of the standings. Round Three winner Davis Cunningham ran second to Shipman in the finale, and the two drivers ended up tied for the title. Shipman was able to grab the crown via the tie-breaker. Round Two victor Ragan Saville joined them on the championship podium in third.

Jack Iliffe added to his racing resume with a perfect sweep in the Micro Swift by VP division. Iliffe finished P1 in every session in 2020, earning his first Texas Sprint Racing Series title. Tyler Roberts had three straight runner-up finishes to close the year and finished second in the standings, while Matthew Dukette ended up third ahead of last year’s champion Bobby Klein. 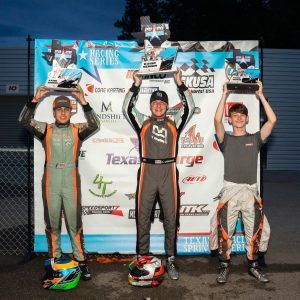 The KA100 Senior by Core Karting championship saw another tie up top, thanks to another must-have performance at the finale. 2019 SKUSA Pro Tour champion Austin Osborne went winless in the first four rounds, but found magic in Round Five for a perfect score. Osborne’s performance put him in a tie for the top of the standings with Adrian Cruz, who would lose via the tie-breaker. Cruz had one win and three other podium finishes, a very similar mark set by Osborne. Travis Wiley, winner of Round Three, completed the championship podium in third. Doug Foxworth secure the championship in KA100 Master by Fullerton Racing. Foxworth scored two wins in the four rounds at which the category was offered, allowing him to beat fellow two-time winner Ross Smith by 40 points. Alan Trout ended up third in the title chase.

Alex Stanfield rode two wins and four total podiums to the title in KA100 Junior by Kart Racing Solutions. Stanfield won Round Three and backed it up with another sweep in Round Four. Missing the podium in the finale, Stanfield scored enough points to win the championship by 148 points. Round Five winner Noah Baker notched his first win of the season, completing four straight podium finishes to end up runner-up in the standings while Round Two victor Peyton Phillips completed the season in third.

All the top-three finishers in the Briggs & Stratton 206 classes at the Texas Sprint Racing Series have a chance to compete at the 2020 IKF GrandNationals. Each champion is awarded an entry with two sets of tires and a 2021 TSRS series package. The vice-champion has an entry and one set of tires, while third-place is the entry alone. 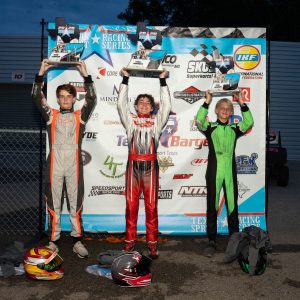 A string of four victories by Ethan Wolfe locked up the championship in 206 Senior by Pryde Race Gear. Wolfe scored max points in the heat races and won the Final for Rounds Two, Three and Four. A fourth victory came in Round Five to secure a 160-point advantage in the title chase. Royce Johnson had two podium finishes to end up second in the final standings with Chuck Jensen’s two runner-up results in five rounds putting him third on the championship podium.

The 206 Master by Ferris Mowers had another champion with multiple victories. Veteran karter DJ Ortiz won the three middle rounds of the series to claim the 2020 crown by 90 points over Travis McCartney and Chance Kelley in third.

206 Junior by 4T Concrete Pumping had four different winners in the five rounds of racing. Winning Round Two and Three was Robert Warren Jr., who managed to maintain the championship lead through the final two rounds to earn the championship. Brayden Robertson did all he could to claim the top spot, placing runner-up and winning at the series finale weekend, be he came up just 31 points shy of the title. Two runner-up results were the best finishes for Caiden Wolfe, who earned the third position in the final point standings.

Four wins in the first four rounds of the season helped Ragan Saville earn a second straight championship in the 206 Cadet by A&M Excavating. The opening three rounds were sweeps, with the fourth victory clinching the championship. Josey Chambers won the battle for the second spot in the title chase with five podium results, edging out Round Five winner Tyler Roberts by only six points. 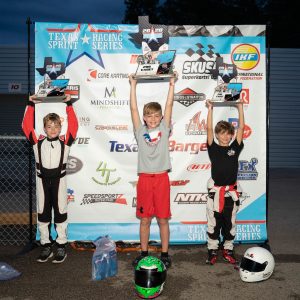 The Honda Kid Karts by Winding Road Racing welcomed a total of 16 different drivers over the five rounds of racing. In the end, only eight points separated the top two drivers in the championship. William Smith secured the series championship with a sweep of the final round, his first win of 2020, to claim the title. Smith earns a 2021 TSRS series package with one set of tires. Paxton Dyson won twice on the year, coming up just short in the chase but earns a 2021 TSRS single race entry with tires. Round One winner Royce Vega joined them on the championship podium in third, taking home one set of Evinco Tires.

The Texas Sprint Racing Series is excited to announce the dates for the 2021 season. Five events are set for five different months. The season begins on March 20-21, and then takes the month of April off before rolling into three straight months of racing. Round Two is set for May 1-2, followed by dates on June 12-13 and July 24-25. The fifth and final round is scheduled for September 18-19. Details regarding the locations and additional information on the 2021 TSRS season will be confirmed at a later time.