Birel ART: Five Podiums at Lonato and Hat-Trick in the Championship 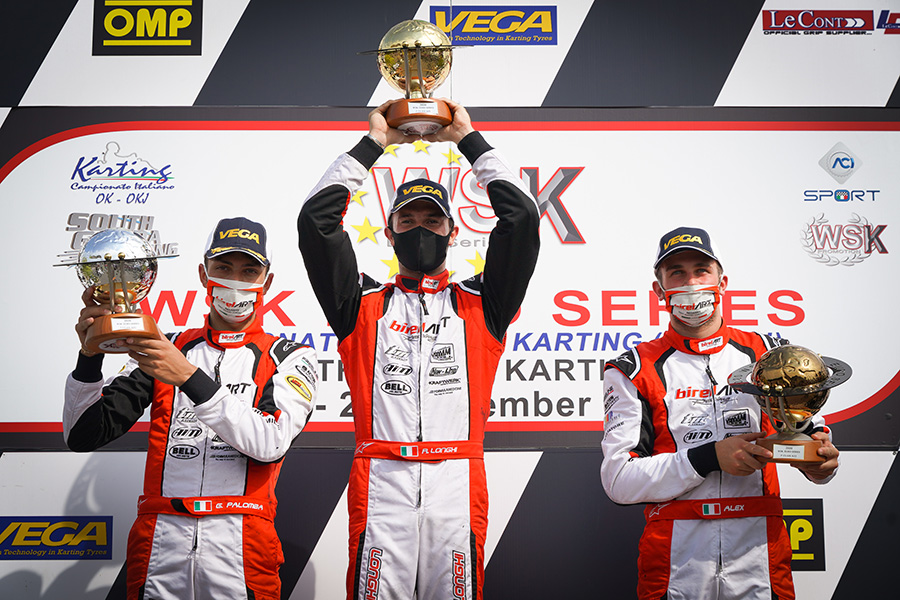 Lonato was a festival for Birel ART-TM! The WSK Euro Series ended with a triumph for the Italian teams. During this rather special meeting, two events per category were held simultaneously in the space of five days. In KZ2, the first one resulted in a triple win led by Marijn Kremers (Ricciardo Kart), Riccardo Longhi and Matteo Vigano (Charles Leclerc by Lennox Racing). Alessandro Irlando won the second round and it was Longhi who won the Championship ahead of Giuseppe Palomba and Irlando! With two weeks to go before the World Championship on the same circuit of Lonato, the Birel ART brand confirms its great current form. This certainly bodes well for the end of this season…

The drivers in the colours of the Birel ART factory made the most of their return to a major international event on the South Garda Karting circuit, an intense week with the successive organisation of the second and third rounds of the WSK Euro Series. On Wednesday, Kremers took pole position ahead of Palomba and Longhi. The tone was set for the chassis from the Italian factory. This was followed by 16 victories in the heats and three in the Prefinals!

At the wheel of his Ricciardo Kart-TM, Marijn Kremers celebrated his recent European Championship with another success in the Final of the second round on Sunday morning. Arriving at Lonato with the lead of the WSK Euro Series, Riccardo Longhi strengthened his hold on the title by securing 2nd place, while Matteo Vigano came back to 3rd position with his Charles Leclerc chassis prepared by the Lennox Racing team. A magnificent treble for the Lissone factory products!

In the afternoon, in the third round, Alessandro Irlando took the honours, showing that all the Birel ART drivers were performing well in Lonato. Giuseppe Palomba accompanied him on the 3rd step of the podium. Leonardo Marseglia managed to gain four places to enter the top 10. Finally rewarded for his efforts, Riccardo Longhi was crowned in this WSK Euro Series! “Riccardo hasn’t always had a lot of chances over the last few years and I am very happy to see him crowned in this very competitive and coveted series,” commented team manager Luca Filini.

Great debut for Bertuca in OK

Hardly back from Germany where they took part in the last round of the European Championship, the drivers entered in OK and OK-Junior had to put their helmets back on just two days later, for this double competition! In these difficult conditions, both physically and mentally, the Birel ART Racing team drivers did not fail to perform. The Brazilian Matheus Morgatto finished all his heats in the top six, but success was not on his side in the Final stages. Dutch driver Maya Weug finished a Prefinal in 2nd position, before taking 7th place in the Final of the second round. As for Cristian Bertuca, he brilliantly made his transition from Junior to OK, with a comeback to 6th position in the Final of the third round.

In this race, the Thai driver Thanapongpan Sutumno completed an encouraging performance. Also to be noted are the performances of the drivers of the Charles Leclerc by Lennox Racing team and the top 10 in OK-Junior for Tymoteusz Kucharczyk (RK-TM) in the Final on Sunday afternoon, after his misfortunes in the morning.