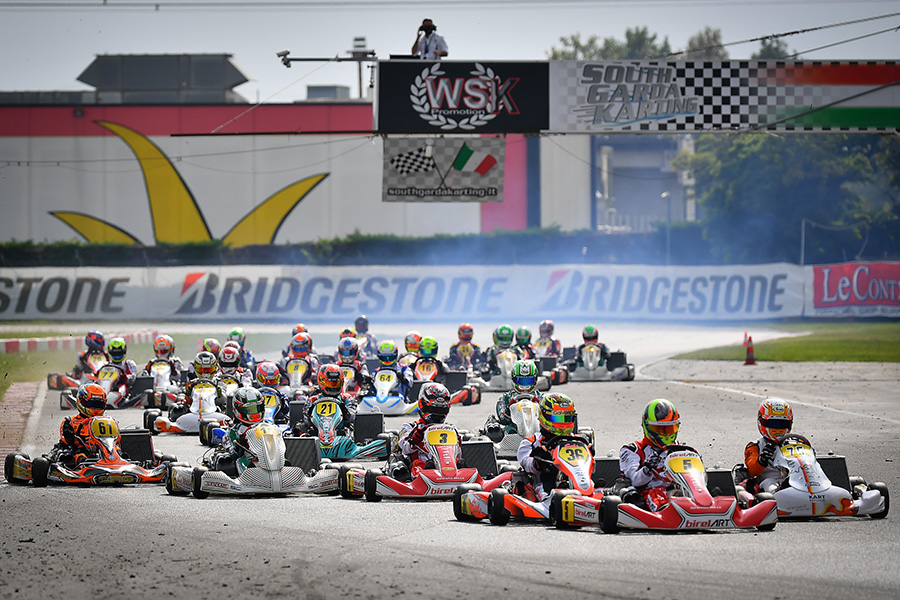 The WSK Euro Series had an exciting and unpredictable conclusion after six racing days for the double round at the South Garda Karting Circuit in Lonato. The grand finale on Sunday, September 20th, was dedicated to the closing races of the Round 2 & 3 for categories KZ2, OK, OK-Junior and MINI after the opener held last July 12th in Sarno.

The 8 finals in Lonato completed the intense program on Sunday in an event that involved 226 drivers out of the over 240 entered from 34 different countries. They competed in 80 races including heats and Prefinals that were necessary to name the finalists putting in a remarkable spectacle with a lot of champions coming to the fore.

The victory in the end went to Riccardo Longhi (BirelART/BirelART-TM Racing-Vega) in KZ2, Andrea Kimi Antonelli (KR Motorsport/KR-Iame-LeCont) in OK, who also won the Italian ACI Sport Championship, Alfio Andrea Spina (Tony Kart Racing Team/Tony Kart-Vortex-Vega) in OK-Junior – who also won the Italian title of the category, and René Lammers (Baby Race/Parolin-Iame-Vega) in MINI. These are the champions, but the battles on track have involved also other very strong karting drivers.

KZ2. Rounds 2 and 3 to Kremers and Irlando, the title to Longhi.

The victory of Round 2 of KZ2 went to the Dutch driver Marijn Kremers (BirelART Racing/Ricciardo-TM Racing) from the two Italians Riccardo Longhi and Matteo Viganò (Leclerc by Lennox/BirelART-TM Racing), while that of Round 3 went to Alex Irlando (BirelART Racing/BirelART-TM Racing), who led the Dutch Bas Lammers (Sodikart/Sodikart-TM Racing) and the other BirelART driver from Italy Giuseppe Palomba. Palomba has been the most accredited title contender, but thanks to the points scored in the opener in Sarno added to those secured in Lonato, Longhi claimed the title with an advantage of 5 points, despite the 11th place in the closing final.

The Italian Andrea Kimi Antonelli (KR Motorsport/KR-Iame) has bene the main protagonist of OK. Hw won the final of Round 2 putting a serious hand on the title and winning the Italian ACI Sport title. His main rivals were the British driver Joe Turney (Tony Kart Racing Team/Tony Kart-Vortex) and the Finn Juho Michael Valtanen (Pantano Team/KR-Iame), that got on the podium behind Antonelli in the second round. In the final of Round 3 Antonelli had to settle for P4, as Joe Turney claimed the win from the Russian Nikita Bedrin (Ward Racing/Tony Kart-Vortex) to Juho Michael Valtanen, who secured another podium in P3. Antonelli won the title leading his closest rival by 28 points.

OKJ. Spina wins Round 2, WSK and Italian title. Lindblad Round 3.

The Italian Alfio Andrea Spina (Tony Kart Racing Team/Tony Kart-Vortex) had a crescendo of results in the double round in Lonato, where he was the protagonist again after the victory in Sarno. Spina came out in the final stages of this double round in Lonato winning Round 2 that earned him also the Italian ACI Sport Championship, and taking second in Round 3, which confirmed his lead in the WSK Euro Series. A lot of other drivers challenged Spina in Lonato. Among these, Brando Badoer (KR Motorsport/KR-Iame) ended the two finals respectively in second and third place, the Brit Coskun Irfan (Ricky Flynn Motorsport/Kosmic-Vortex) was third in Round 2 and the other British driver  Arvid Lindblad (KR Motorsport/KR-Iame), who won the closing final of Round 3.

MINI. Nakamura wins Round 2, Lammers Round 3 and takes the title.

The smallest category, MINI, had a very high competitiveness and among all the others the Dutch René Lammers (Baby Race/Parolin-Iame) had the upper hand coming second in Round 2 and winning the sprint to the line of Round 3. This result allowed the young Lammers (son of the former F1 driver) to take the title from the Japanese Kean Nakamura Berta (Team Driver/KR-Iame) who was one of the strongest rivals. In Round 2 Nakamura secured the victory leading Lammers and the American Kai Sorensen (Parolin Racing Team/Parolin-TM Racing). Lammers won the final of Round 3 though leading the Team Driver’s duo made by the Slovenian Mark Kastelic and the Italian Antonio Apicella, as the other Team Driver’s racer Nakamura ended fourth and lost the classification lead to Lammers.

The next appointment on track is scheduled for November 23-29 2020 for the two rounds of WSK Open Cup in Adria.

Results and classifications are available at www.wskarting.it