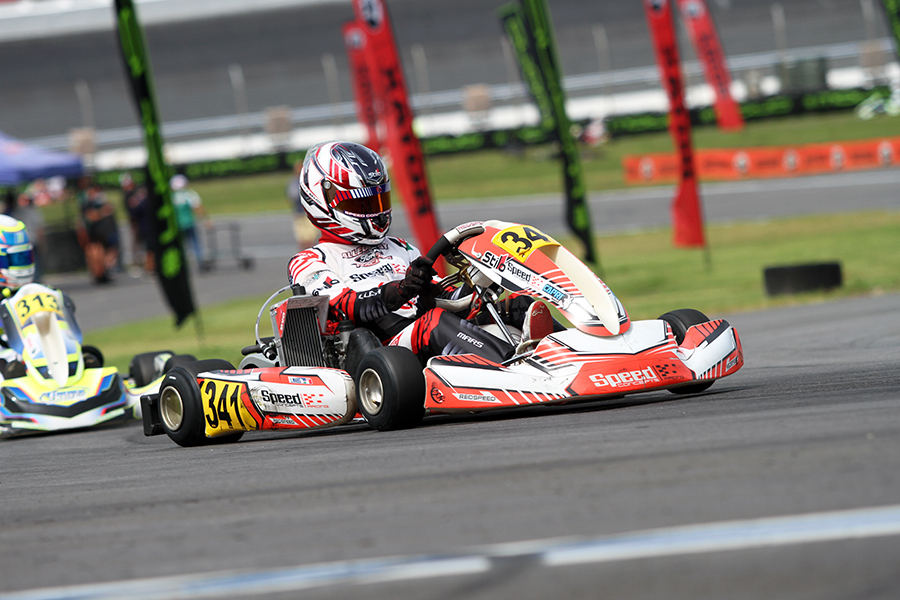 Luca Mars has a perfect score in Senior Max through Day 1 of USRGN (Photo: EKN)

The first wheel-to-wheel racing laps were conducted on Friday at the Charlotte Motor Speedway for the 2020 Capri Tools US Rotax Grand Nationals. Official practice day on Thursday was cut short after two sessions due to the amount of rain dropped on the Concord, North Carolina facility due to the progression of Tropical Storm Sally. The early call to practice prompted Rotax officials to add two rounds of practice Friday morning, in addition to the warm-up, and move Heat 3 races to Saturday morning.

Rain continued to fall all day and into Friday morning. Practice began with a soaked track and all drivers on rain tires. About halfway through the three rounds, dry MoJo tires began coming out and thankfully, everyone received one session with dry conditions before qualifying. The eight-minute timed session set the line-up for each heat race around the near 7/10-mile course. Drivers were able to get a feel for racing with the opening two rounds contested today.

Senior Max was the opening category on the track and was led throughout the day by last year’s Stars & Stripes Open Junior Max winner Luca Mars. In qualifying, Mars (SCR / Redspeed) was the only driver into the 41s, edging out fellow session rookies Westin Workman (TimmyTech / CompKart) and Max Opalski (RPM / Tony Kart). Mars never put a wheel wrong, leading all 10 laps in both heat races for the wins. Heat #1 was a 0.4-second advantage over Workman with Hayden Jones (Nitro / Tony Kart) up to third. It was the same 1-2 finish in Heat #2 as Justin White (Kartworkz / CompKart) improved from ninth to win the fight for third. 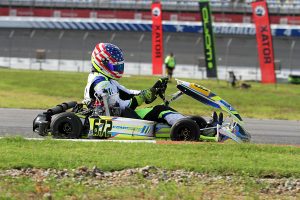 Micro Max was next in the order with two drivers setting the pace. Issac Malcuit (Kart Republic) set quick time in qualifying, edging out Keelan Harvick (Nitro Kart) by 55 thousandths. They ran 1-2 in the opening heat race with Malcuit pulling out to a 2.5-second gap. Harvick found pace in the second heat, grabbing the lead early and pacing the field all 10 laps. Malcuit kept on his bumper the entire distance as Gage Korn (CompKart) ran third in both heats.

John Bonanno (CompKart) set himself up as the driver to beat in Masters Max. Bonanno swept the opening day of action with quick time in qualifying and leading every lap in the two heat races. The battle thus far is for second with Tim Shutt (TimmyTech / CompKart) holding the position through qualifying and Heat #1 before 2016 US Rotax Grand Nationals winner Derek Wang (RPM / Tony Kart) took over the position in Heat #2.

Three different drivers finished the official sessions on top in the Junior Max category. California driver Frankie Mossman (CompKart) set fast time in qualifying, but wild starts by the entire field shuffled up the order in the opening corners. Mateo Rubio Luengo (Supertune / Tony Kart) led nine of the 10 laps in Heat #1 for the win ahead of Cameron Weinberg (Nitro / Kosmic) and Julian DaCosta (Haase). Mateo jumped out to the lead at the start of Heat #2 and led the first nine laps. Alex Berg (RPM / Tony Kart) slipped past for the top spot on the final circuit, earning the win. Mossman worked by Mateo on the final lap for second. 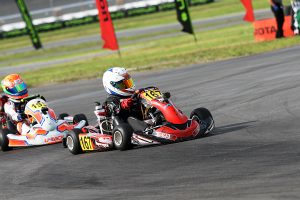 2019 Stars & Stripes Open Micro Max winner Ben Maier (Nitro Kart) went two-for-two in the Mini Max division. Caleb Gafrarar (PSL / Birel ART) set fast time in qualifying, and led the first half of Heat #1. Maier took over the top spot and scored the win. Gafrarar led to begin Heat #2 and was pressured early. He established a bit of a gap before dropping a wheel and dropping to fifth. That allowed Maier to grab the lead and earn a second win. Enzo Vidmontiene (CompKart) drove to second but was removed for not checking into tech. That promoted George Wheeler (Nitro Kart) to second and Parker DeLong (Nitro Kart) to third.

The Pro 4 Cycle category began their run for the $1,000 winner check. Thus far, the cash is Luca Mars to lose. Mars (Redspeed) set fast time in qualifying, like Senior Max, led all 10 laps in each heat for the wins. Collin Miller (MGM) was runner-up to Mars both races, going from two seconds back in Heat #1 to on his bumper in Heat #2. Ryan Casner (VLR) drove to third in both heat races.

Championship Saturday is set to be dry all day, with temperatures a bit cooler than it was Friday. Drivers will contest the final round of heats, providing the grid for the Prefinal. Points from the Prefinal combined with the heats set the lineup for the main events where nine tickets to the 2020 Rotax Max Challenge Grand Finals in Portugal will be awarded. Tune in to EKN Live – www.ekartingnews.com/live – all day for play-by-play from Eric Brennan.