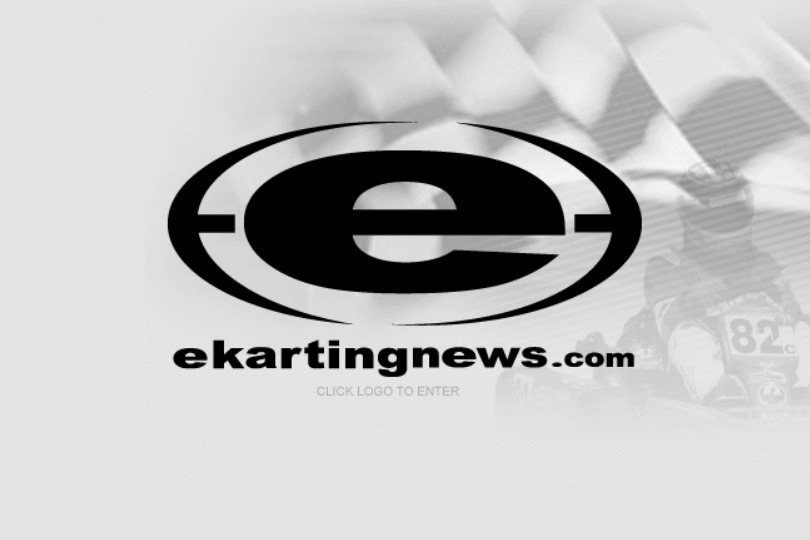 Today’s date – September 17, 2020 – marks the 20th anniversary of the day that the electronic doors opened at eKartingNews.com. It was during the 2000 Superkarts! USA World Finals in Norman, Oklahoma that EKN was born. Yes, current EKN Publisher Rob Howden was trackside announcing the event, but he was there with Shifter Kart Illustrated, the magazine that he launched just two years prior. It was there in Oklahoma that Rob’s path crossed with Glenn Holland. 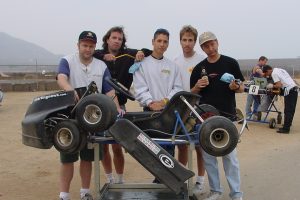 Holland was a life-long racing fan who tried the Skip Barber route, but his bank account said “look for something less expensive”. The California native grew up just miles from the birthplace of karting, and in early 1999, he started a web search to learn about the sport. That search led to connections in the karting business in SoCal. But during his search, there were very few web resources on the sport at the time.

“Rich Hearn pulled a Go Racing Magazine off the shelf and showed me all the advertisers,” stated Holland, who now works for Amazon Web Services. “He said if you can get just a few of these advertisers on your new site, all the others will follow. So I started outlining the site in earnest and talking to a few of my friends, including future partners Jeff Franz and Brian Stiver. But it was long-time friend Dennis Sobolewski who not only came up with the site name but grabbed the web domain. Dennis helped with some of the early formation but was happy to let us run with it. As I’ve said many times, I wanted to start a kart racing website, and knew next to nothing about two topics: karting and websites.”

Holland continued, “By this time we had picked up all the karting publications and Shifter Kart Illustrated really stood out. They were doing what I had envisioned, which was showcasing the sport and helping make it look big-time to draw interest. While flipping through an issue, Jeff and I noticed that the SKUSA World Finals were coming up in Norman, Oklahoma. I then planned to piggyback a trip to Norman from a Dallas commitment from my day job. And that weekend – September 17-18, 2000 – was when eKartingNews.com was unveiled.”

Rob Howden, EKN Publisher recalls the early days of the website. “When EKN was first launched, I was impressed by the platform. Websites were new and daily updated platforms just weren’t a thing yet. We were all struggling with dial-up internet, and the sites needed to be clean and simple. I had been playing with website technology myself for Shifter Kart Illustrated, but our site was designed to promote the magazine first and foremost. EKN was new and it was different, and it quenched the community’s thirst for immediate news, which changed the media landscape for good. I remember meeting Glenn at Oklahoma Motorsports Complex during the SKUSA World Finals and I offered any help I could, because I was working so closely with Jim Murley and SKUSA. I didn’t see EKN as direct competition at the time, because we were delivering much different products.  I personally used the EKN forums to connect with the community, so they were definitely providing a service to the sport.”

Let’s go back to 1997, when it was my first year of college at Western Michigan University. I was like many students, not knowing what to do with the rest of my life, but wanted that college experience. I got it, and paid for it. But at the beginning, it was an introduction to the internet. At home, there was AOL with chat rooms and private messaging, but I never had an email address. When you arrived on campus, every student was given a personal email account, with the main library housing a computer lab to complete schoolwork and check your email. More importantly, it was a chance to waste time roaming the internet. It was there that I connected with a new platform outside of the monthly magazines I would receive in the mail. There were email lists and bulletin boards now talking about the sport I loved. Several other sites popped up through my first years in college until the start of my fourth year when this new URL came across my path – eKartingNews.com.

While the site was a welcomed hub for news and information regarding the sport, it really was a hub for the community with the forums. Long before social media, forums were the place everyone went to post ideas, questions, concerns and especially opinions. And the EKN Forum was just that for karting. It was in 2002 that the forums launched, and with that, became the first stop every morning, lunch break and evening stop when browsing the internet.

Holland singled out the forums as a turning point for the growth of the site. “The key event was being handed the torch from Pete Muller of his very popular and legendary karting forums site. It was easily the most popular kart site in the U.S. He had grown tired of dealing with the site and the BS that comes with forums. We had earned enough trust with Pete that he wouldn’t formally give us the site, but said if we provide a very similar offering, he would recommend his viewers transition to ours and will ultimately close his forums. We were shocked, honored and excited. We chose not to redesign anything. We created a virtual duplicate of Pete’s forums and, consequently, had a huge influx of readers. From there, we expanded by covering more races, having a presence and most big events. At the same time, the advertisers flowed in.”

Who remembers the many discussions on the EKN forums in the early 2000s?

For me personally, I was one of the first 40 people to sign up for the new version of the forum in 2003. I’m sure my early experience with the forum provided a chance to connect with people I only knew by name, have the ability to learn more about the sport every day, reach out to help fellow karters with tips or advice, and promote the events I helped with during my volunteer days with the Michigan Kart Club and Mid-States Enduro Series.

It was at the end of the four-year run by Holland, Franz and Stiver that the site would change hands. Franz had moved on to start KartSport Magazine, and Holland and Stiver wanted to sell. On September 18, 2004, the announcement was made that Howden Communications Inc. had purchased eKartingNews.com from E Enterprises LLC.

Holland looks back on the five years of building the site from scratch to selling it, “We got very busy with a lot of initiatives, trying to grow the company. It was a hard-knocks MBA, which took twice as long and cost about twice the money but provided so many lessons in business and life. There were a lot of highlights and lowlights. Highlights included starting the karting forums as it was such a boost to our business, agreeing with Speedvision.com (SPEED Channel) to be their exclusive source of karting news, and probably the most audacious: hosting the EKN awards in Vegas in a penthouse suite at the Bellagio. I wish I could tell all the stories.”

“The five years of forming an idea, planning a business, launching, seeing rapid early growth, expansion, huge strategic mistakes and finally selling EKN to Rob was an amazing experience. I’m so happy eKartingNews is seeing it’s 20th anniversary – something you don’t think of when you start something but a validation of the original idea and testament to Rob’s continued vision of providing the best karting media and coverage possible.”

The same thoughts come from Howden as well, “I think the friendship and level of respect between Glenn and I laid the groundwork for the eventual offer for me to buy the site, and over the years that Glenn, Brian and Jeff ran EKN, I think we all enjoyed the healthy competition between us, which pushed us all to be better.”

EKN became much more of my life than fun, it became my profession. Following the purchase of EKN by Howden, he named me as the Managing Editor. I had worked with HCI through the magazine as a regional reporter, and that helped to put me on the ‘short list’ for the job. From my home in Grand Rapids, Michigan I began my new career as a motorsports journalist. My first official event trackside for EKN was at the Superkarts! USA SuperNationals 8 at Sam Boyd Stadium in 2004. From there, it was my goal and mission to provide a trackside seat for those who could not be there.

Many hours were spent updating the site, attending races, and managing the forums. Our coverage trackside developed and grew and expanded with the addition of live audio beginning in 2009 at the SKUSA SuperNationals. When the SKUSA Pro Tour launched in 2010, we were there in Sonoma broadcasting the inaugural event and have been to every event over the 11 seasons. Throughout the last 10 years, we’ve added several events that have been on the Trackside Live coverage, including the SKUSA Winter Series, Challenge of the Americas, WKA Manufacturers Cup Series, United States Pro Kart Series, and many more including special one-off events like the Rock Island Grand Prix. This weekend, we get to broadcast for the first time from the US Rotax Grand Nationals at Charlotte Motor Speedway, another event and location to check off the list for our EKN Live program.

It was nearly 10 years until the face of the website changed with the launch of EKN Version 2.0 in July 2013. Like every new thing, it began with some hiccups along the way, however, the one true statement remained. EKN was the hub of karting on the internet. 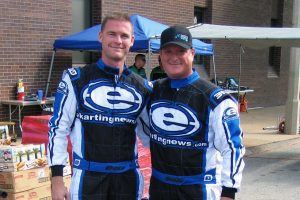 Audio was something we played with early on with the ‘Happy Hour with Howden’ in 2005. The demand for podcasts launched a series of shows from EKN beginning in 2017 with ‘Debrief’, ‘Hot Seat’, ‘Operation Grassroots’, ‘Industry Insider’, ‘This Week In Karting’, ‘OutLap’ and of course the ‘Book It’ with Rob Howden. Those podcasts shows led to the creating of the EKN Radio Network, the only 24 hours / 7 days a week radio station you can play from nearly any device. COVID-19 expanded our video content with the debut of the ‘Face2Face’ series directly on Facebook and YouTube, along with unique Instagram Live interviews. EKN was among the first karting elements on social media and remains one of the top legitimate news outlets for the past 20 years.

The 2020 season, and year have been like no other. While the worries of the COVID-19 pandemic haunted the industry during the early months and ‘stay-at-home’ orders, the karting community bounced back and the industry is back booming, including amazing numbers from the grassroots level to the international scene. As the end of the year draws closer with each rise and set of the sun, the passion and dedication that began with Holland, Franz and Stiver with the website continues under the HMG banner, and for what we hope will be another amazing 20 years.