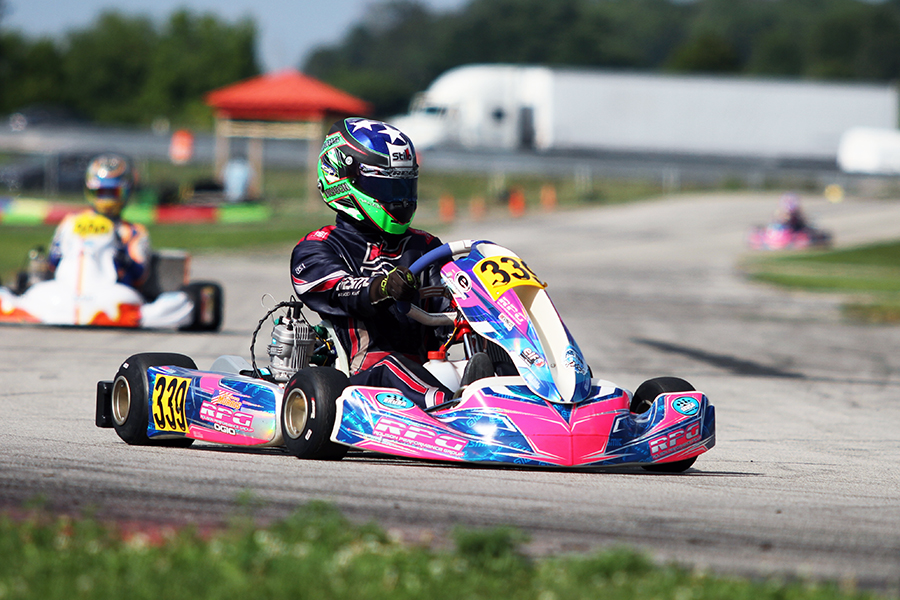 The 2020 Superkarts! USA Pro Tour was conducted unlike anything ever in the sport of karting. Six rounds of racing were organized into 10 days at the New Castle Motorsports Park for what was labeled as the SKUSA Summer Festival. The opening three rounds were held around the ‘Super Mile’ course with the final three rounds raced on the ‘Reverse National’ layout. The marathon in New Castle, Indiana was highlighted by the breakout performance of Rolison Performance Group driver Bryson Morris.

The Senior rookie contested both the X30 Senior and KA100 Senior categories over the two weekends at what has become his home track with the early karting days under the Comet Kart Sales tent. It was his debut in the KA100 Senior class after beginning the year just racing X30 Senior at the SKUSA Winter Series. Morris was able to run up front in the opening round for KA100, placing runner-up in both the Prefinal and Final. Round Two was Morris ending the day on top of the podium for his first victory in the category. Starting fourth, he jumped to the lead and led majority of the Final. Sunday of the opening weekend was nearly a carbon copy, starting fourth and winning the main event. Morris used a last lap draft past at the line to claim a second straight victory to close out the opening weekend.

Friday of the second weekend hosted Round Four. Morris started the main event on the front row, but a wild final circuit saw him drop to fourth with RPG teammate Nathaniel Cicero earning the victory. That would be the only round Morris did not finish on the podium, as he came back on Saturday for Round 5 with victory and championship on his mind. Morris was strong in the Prefinal, only to suffer a pushback bumper penalty to drop him to seventh on the main event grid. Morris fought his way up to third and then ran down the leaders, who held a 1.5-second advantage. With two laps remaining, Bryson picked them off one by one, driving to his third victory in five rounds. The results provided enough points for Morris to clinch the championship one day early, earning his first career SKUSA Pro Tour title.

It was a similar performance in the X30 Senior category, battling against the top drivers in the USA. The opening round was a near perfect performance as Morris scored his first SKUSA Pro Tour victory in the category. Placing second in the Prefinal was the only blemish on the day, setting fast time in qualifying and earning fast lap honors in the main event en route to the win. Morris remained in the top-five for Round Two, placing fourth with fast lap of the race once again. Bryson shined for the final day of competition on the ‘Super Mile’ with a Prefinal and Final win in Round Three. The two wins set Morris up with the championship lead going into the final weekend.

Round Four moved to the ‘Reverse National’ layout at New Castle, and Morris kept himself toward the front of the field. After placing top-10 in qualifying and the Prefinal, Morris drove to fifth in the main event for a fourth straight top-five result. Bryson saved the best for the main event in Round Five. Starting fifth, Morris quickly put himself to the point, assuming the lead by lap six. From there, Bryson was able to pull away bit by bit to a 1.2-second advantage of his third victory in five rounds. Those three wins and two top-five results helped to give Morris the championship one round early, making him the first Senior driver to win two SKUSA Pro Tour championships in the same season.

Morris took Round Six off in both categories after experiencing rib pain throughout the event. He was scheduled to compete at the US Rotax Grand Nationals, however, is pulling out of the event to extend the healing time on his ribs. The next event for the now two-time SKUSA Pro Tour champion is the upcoming Cup Karts North America Grand Nationals 4 at New Castle Motorsports Park on October 2-4. The ROK the RIO and SKUSA SuperNationals 24 remain penciled in to close out the 2020 season. 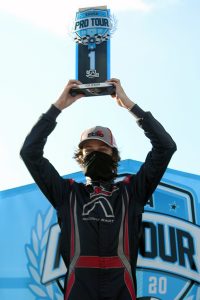 Chassis: Kosmic
Engine/Engine Builder: AVP
Sponsors: Stilo, GoPro, and OGIO
Series You Compete In: United States Pro Kart Series, Superkarts! USA Pro Tour, USAC, ROK Cup USA
Years Karting: 5
How did you get started in karting? My local track (Twin Fountains in Shelbyville, Tennessee) in a Briggs 206
What has been the high point in your racing career? Winning the SKUSA Pro Tour championships.
What are your goals in racing? To race in the top tier of sports cars.
In a few words, how would you describe your driving style? Smooth, calm, and clean.
Funniest moment at the race track? Losing two rear wheels at once.

What do you do when not at the track? Watch Hulu or go watch racing
What are your goals outside of karting? Get good grades
What app or game do you play right now? Valorant
What type of street car would you like to drive? Ford Focus RS
What are your pet peeves or things that irritate you? People that argue when they are wrong and know it.
What do you think could be done to improve the sport of karting? To somehow make it more fair and lower costs.
What are your favorite aspects about the sport of karting? It’s really physical, competitive, and is a great path to cars.