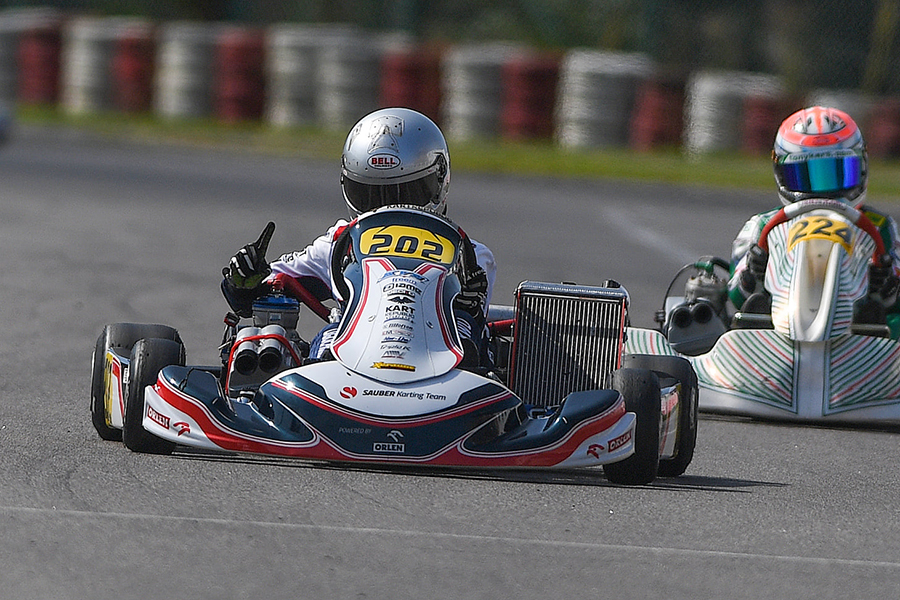 The third and last day of the FIA Karting European Championships – OK & Junior at Wackersdorf kept the tension up to the end of the Finals with incessant clashes between all participants. The suspense remained high throughout the competition before Ugo Ugochukwu (USA) and Andrea Kimi Antonelli (ITA) were crowned in Junior and OK respectively.

The Wackersdorf circuit, which had not hosted an FIA direct-drive kart competition since 2012, has lost none of its sporting and spectator appeal. Some competitors struggled to regain their ease on the German track, while others took advantage of the opportunity to shine. Overtaking was particularly common throughout the weekend and the many spectators in front of their screens around the world enjoyed a first-class show. Fine weather was also on hand with clear skies and warm sunshine for the exciting races full of twists and turns. 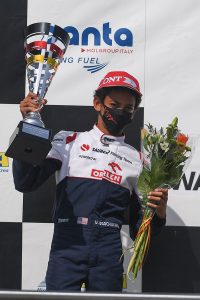 Ugo Ugochukwu (USA – KR/IAME/LeCont) added a fifth victory to his perfect score in his last Qualifying Heat on Sunday morning and was able to approach the Final as leader of the provisional ranking of the FIA Karting European Championship – Junior. Arvid Lindblad (GBR – KR/IAME/LeCont) had however moved closer and shared the front row of the grid with the American. Lindblad soon took the lead, followed by Harley Keeble (GBR – Tony Kart/Vortex/LeCont). Ugochukwu did not expect to stay in fourth place behind Martinius Stenshorne (NOR – KR/IAME/LeCont) and gradually moved back into second. Lindblad could no longer be beaten and took a great victory, 1.4” ahead of the new European Champion Ugochukwu. Keeble was on the third step of the podium, Sonny Smith (GBR – KR/IAME/LeCont) finished fourth and Karol Pasiewicz (POL – Tony Kart/Vortex/LeCont) fifth with the fastest lap in the race. Finally 16th in the race, Tuukka Taponen (FIN – Tony Kart/Vortex/LeCont) was forced to give up second place in the Championship to Lindblad.

“I had a fantastic weekend,” said Ugo, “My kart was really good. I was surprised by a slightly slippery part at the beginning of the Final and I fell back to 4th. It didn’t affect the Championship, but I tried to get back on track and second place suits me. I’m very happy to win the European Championship which is very valuable because you have to be consistent and perform well over several races. Having said that, I am of course very motivated for the next World Championship at Portimao.”

OK: Victory and the title for Antonelli 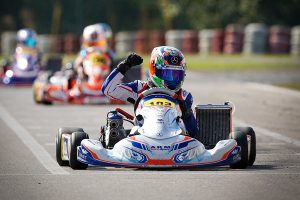 At the end of his last Qualifying Heat on Sunday morning, Andrea Kimi Antonelli (ITA – KR/IAME/LeCont) consolidated his domination and secured pole position on the starting grid for the Final of the FIA Karting European Championship – OK at Wackersdorf. Taylor Barnard (GBR – KR/IAME/LeCont) was still leading the provisional Championship standings with a lead of just three points and had to start from ninth on the grid.

The pressure was on Antonelli throughout the Final, but he led from start to finish. Rafael Chaves Camara (BRA – Exprit/TM Racing/LeCont) followed him closely as Barnard climbed up to fourth and then third and got closer. Camara had the fate of the Championship in his hands, but he was never able to attack the leader. With an indisputable victory 0.8” ahead of the Brazilian, Antonelli was crowned European Champion. Barnard was then relegated to sixth place because of a front fairing in the wrong position at the finish and it was Marcus Amand (FRA – KR/IAME/LeCont), after a very nice race, who climbed on the third step of the podium with the fastest lap. Luigi Coluccio (ITA – Kosmic/Vortex/LeCont) and Juho Valtanen (FIN – KR/IAME/LeCont) completed the top five in the Final.

“I had a perfect weekend, but it was never easy,” said Andrea Kimi. “I had to concentrate hard in front of the constant threat of Camara. As the leader, I had to watch the condition of the track which was sometimes a little dirty after the fights and the minor exits from the track. I absolutely had to stay ahead of Taylor to win the title. I have to admit I was a little relieved when my lead increased during the last few laps. We will have to keep working hard to stay on top for the World Championships.”

The complete results of the Wackersdorf Competition are available on the official FIA Karting Championship app for mobile devices and on the website www.fiakarting.com