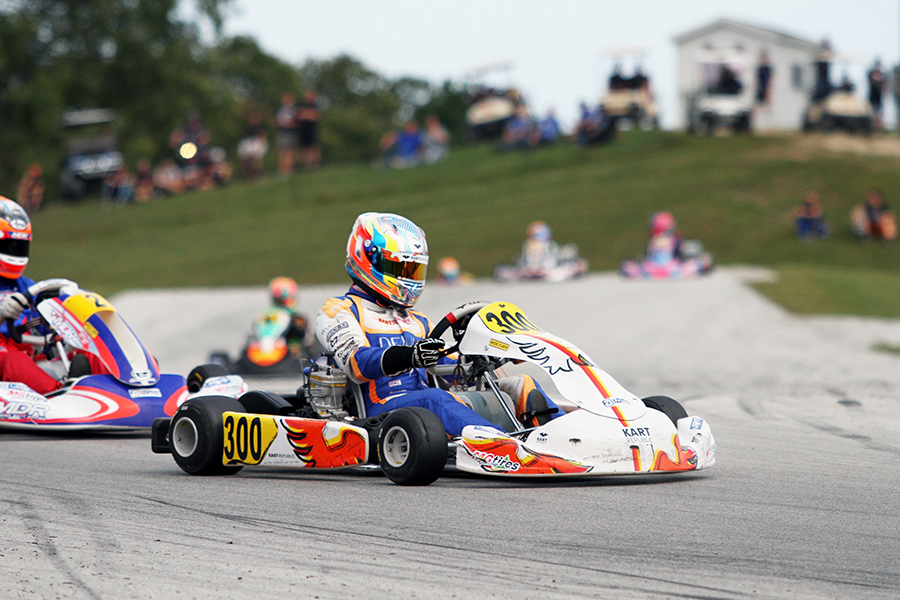 The second half of the 2020 United States Pro Kart Series is underway with Round Four contested Sunday at the CTECH Manufacturing Motorplex. The Badger State Grand Prix wrapped up at Road America with another perfect day for racing. Rain was forecasted all day at the Elkhart Lake, Wisconsin facility. The sun broke through the clouds all day, and rain waited until all on-track action was completed. Winners on Sunday were almost all new drivers, with only one driver able to repeat their Saturday triumph, helping to shake up the championship chases as the series finale is ahead. 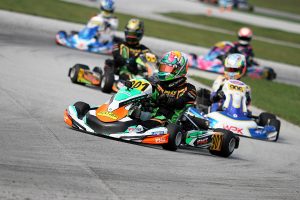 The main events at Road America were long, and set up for interesting scenarios as the race played out. For X30 Pro, it was a 26-lap chess game. Some drivers were quick early, including Pauly Massimino (MDR / Kosmic) and Hayden Jones (Nitro / Tony Kart). In the end, it was Arias Deukmedjian (KSNA / Kart Republic) and three-time champion Brandon Jarsocrak (MDR / Kosmic) that paced the field at the end. Deukmedjian took the lead on lap 16, with Jarsocrak on his bumper. Jarsocrak was unable to find a way past on the final circuit, and Deukmedjian, the EKN Driver Rankings #1, drove to his second victory of the season. The runner-up finish helped Jarsocrak to earn the $5,000 payday for the weekend with his two podium finishes. The fight for third went to the wire with Brandon Lemke (FMS / Merlin) working past Massimino and Luca Mars (SCR / Redspeed) on the final circuit.

Brandon Lemke (FMS / Merlin) became the fourth different winner on the year in KA100 Senior class. Lemke completed a sweep of the action on Sunday. Josh Hotz (FMS / Merlin) led two of the 24 circuits before Lemke dominated the main event. Round One winner Arias Deukmedjian (KSNA / Will Power Kart) put himself in the lead challenger position, but never was close enough to mount a charge on Lemke. Hotz completed the podium in third with Blake Hunt (KSNA / Kart Republic) fell to seventh at the start but fought back to fourth with Nathaniel Cicero (RPG / Kosmic) in fifth. Saturday winner and point leader Alex Bertagnoli (KSNA / Kart Republic) suffered a broken chain on lap eight while in the top-10, shaking up the championship chase heading to the series finale. 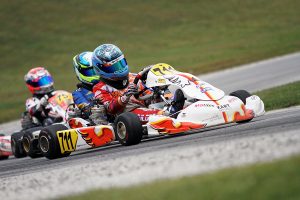 The X30 Junior race was a wild 26 laps with a large lead pack early on, and featured at minimum eight lead changes. In the end, three drivers worked away from the pack to settle the fight for the victory – including Prefinal winner Brent Crews (KSNA / Kart Republic), top qualifier Jace Park (SCR / Redspeed) and Max Opalski (RPM / Tony Kart). Crews took over the point with three laps to go, and held off Opalski and Park at the line for his first victory of the season. Saturday winner John Burke (Supertune / Tony Kart) was fourth with Paul Bocuse (SCR / Redspeed) the hard charger, climbing 14 positions to fifth.

KA100 Junior also welcomed a fourth different winner on the season. Thomas Annunziata (TFR / Kart Republic) was quickest in qualifying and Brent Crews (KSNA / Will Power Kart) came out as the winner in the Prefinal. Carson Morgan (MR / Tony Kart), making his first start of the season this weekend at USPKS, put himself up front early. He and John Burke (Supertune / Tony Kart) were out front when the two made contact on lap 15. Burke climbed the back of Morgan and went into the wall outside of the last turn. That ended his race early. Morgan continued leading and fighting for second allowed him to get away in the final laps for the victory. Annunziata won the fight for second ahead of Crews. Championship leader Westin Workman (TimmyTech / CompKart) was fourth with Christian Miles (KSNA / Kart Republic) in fifth. 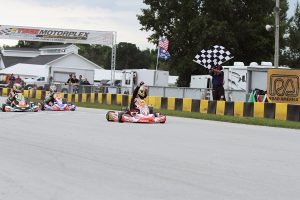 The streak in X30 Masters came to a close, thanks to the final circuits put in by Scott Roberts. Three-time winner Scott Kopp (FMS / Exprit) won the Prefinal and set the pace for the first 20 laps. Lap 21, Roberts (SCR / Redspeed) slipped past Kopp and was able to fend off multiple attempts by the point leader in the final three circuits to score his first victory of the season. Kopp settled for second with former series champ Laurentiu Mardan (TecnoKart) trailing in third. Defending champion David Galownia (TimmyTech / CompKart) crossed the line in fourth but was removed following tech. That put Alex Mueller (CompKart) to fourth and Logan Cozzie (TimmyTech / CompKart) to fifth.

Max Garcia was the lone driver on the weekend to win twice in the same category. Garcia’s run to the victory on Sunday was much different then the cruise on Saturday. Ayrton Grim (Nitro Kart) set fast time in qualifying, edging out Garcia by 20 thousandths. Garcia put himself at the point in the Prefinal, and then was challenged in the main event. Round One winner Matias Orjuela (Parolin) took the lead on lap eight, before Garcia took it back the following lap. Cameron Brinkman (FMS / Merlin) followed him through and put the pressure on Garcia the remaining distance. On the final circuit, Brinkman took over the lead three corners from the finish, with Garcia striking back in the next corner. Garcia came out of the final turn with the lead and scored his second victory of the weekend. Orjuela ran solo in third with Davis Cunningham (Speedsportz / Birel ART) recording his best USPKS finish in fourth. The fight for fifth was won by Spencer Conrad (Nitro Kart). 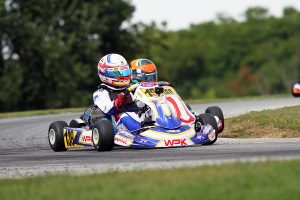 Micro Swift was a two driver battle between top qualifier Vivek Kanthan (MDR / Kosmic) and Prefinal winner Carson Weinberg (Nitro Kart). Weinberg led the first 15 laps before Kanthan took over the position. On the final circuit, Weinberg made his move early and held off Kanthan for his first USPKS victory of the season. Gianmatteo Rousseau (Nitro Kart) drove solo in third, earning his first USPKS podium. Ethan Tovo (Nitro Kart) won the fight for fourth ahead of two-time winner Jack Iliffe (IRM / Tony Kart), who rebounded from another DNF in qualifying for a mechanical issue.

The United States Pro Kart Series is set to close the 2020 season on October 15-18 at the GoPro Motorplex in Mooresville, North Carolina with the final two rounds of competition.