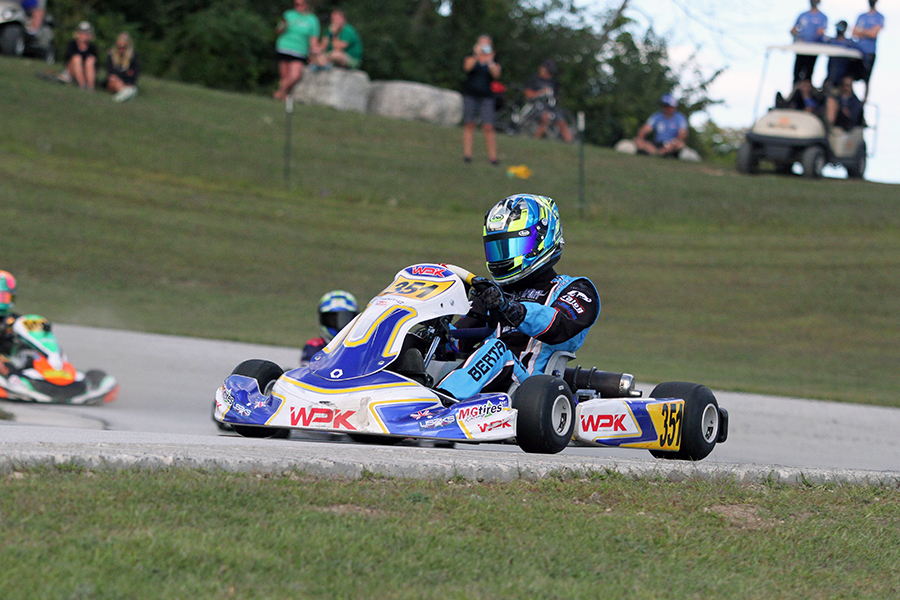 Alex Bertagnoli is the third different winner on the season in KA100 Senior (Photo: EKN)

The first day of competition at the 2020 United States Pro Kart Series Badger State Grand Prix was completed on Saturday in Elkhart Lake, Wisconsin. The CTECH Manufacturing Motorplex at Road America is hosting the second event this weekend as over 170 entries are battling in the seven IAME categories. Weather was perfect all day Saturday, with sunny skies and comfortable temperatures in the 70s. Since the unofficial practice, drivers have been trying to come to grips with the 8/10-mile circuit. Seven drivers, including six new winners on the year, reached the checkered flag first on the day, including three aboard the new Will Power Kart. 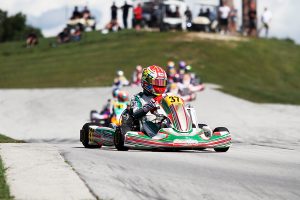 One of the first time winners, earning his first ever at the USPKS, was Diego Contecha (Orsolon / Tony Kart) in X30 Pro. The Florida driver set fast time in qualifying and held off a charging Pauly Massimino (MDR / Kosmic) for the Prefinal win. Contecha jumped out to a big lead early in the 26-lap Final, as drivers fought for the second spot. Eventually, Brandon Lemke (FMS / Merlin) and Brandon Jarsocrak (MDR / Kosmic) broke away from the field and lap by lap, reeled in Contecha. On lap 19, Jarsocrak and Lemke worked past Contecha and pulled out a little gap over the Senior rookie. On the final circuit, the top two fought for the lead, allowing Contecha to close back in. Lemke led as they reached the final corner. A defensive line made for a tight run out, and dropping a wheel at the apex slowed his pace just enough for Jarsocrak to dive inside. Contecha had an amazing run on both, making it a three-wide run to the checkered flag. At the line, Contecha took the victory by 12 thousandths ahead of Lemke with Jarsocrak in third, off by 44 thousandths. Luca Mars (SCR / Redspeed) advanced two spots to fourth and Ryan Norberg (RPG / Kosmic) climbed five spots to fifth.

Alex Bertagnoli (KSNA / Will Power Kart) came into the weekend at the championship leader in KA100 Senior. Bertagnoli extended his championship lead with his first victory of the season. The 2017 series champion started the main event fourth with top qualifier and Prefinal winner Brandon Lemke (FMS / Merlin) on the pole position. It was Josh Hotz (FMS / Merlin) jumping out to the lead on the opening circuit, with Bertagnoli challenging. Hotz led two of the first three laps before Bertagnoli settled in as the leader, and maintained a comfortable advantage over the 24-lap race to earn the victory. Hotz beat Tristan Farber (Switch / Kosmic) to the line for second but a jump start penalty put Hotz back to fourth. That promoted Lemke to third with Luca Mars (SCR / Redspeed) completing the top-five. 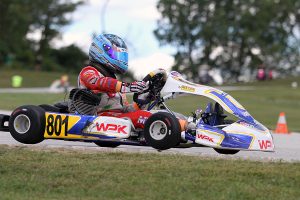 Brent Crews won his first on the season in KA100 Junior (Photo: EKN)

Brent Crews (KSNA / Will Power Kart) became the third different winner on the year in KA100 Junior. Crews started second alongside Prefinal winner Thomas Annunziata (TFR / Kart Republic), who led the opening two laps of the 24-lap main event. Crews took over on lap three and pulled out to a solid lead. Christian Miles (KSNA / Kart Republic) and Carson Morgan (Tony Kart) hooked up to slowly reel in Crews. It was not enough, as Crews held on through the final few laps unchallenged to earn the victory. The fight was for second in the final few corners as Morgan took the spot from Miles, who in turn edged out Danny Dyszelski (Nitro / Kosmic) for the final step of the podium. Championship leader Westin Workman (TimmyTech / CompKart) held his position in fifth.

The X30 Junior category was decided on the track, and off the track. On the track, John Burke (Supertune / Tony Kart) overcame a Prefinal DNF to drive up from 19th to the lead. Max Opalski (RPM / Tony Kart) was able to work past Burke on the final circuit, crossing the line first. Opalski would be removed from the results following tech, thus promoting Burke to the top of the podium for his first win of 2020. Jeremy Fletcher (Benik / Kosmic) and top qualifier Jace Park (SCR / Redspeed) joined him on the steps with Brent Crews (KSNA / Kart Republic) fourth and Prefinal winner Alex Stanfield (Crosslink / Exprit) fifth. 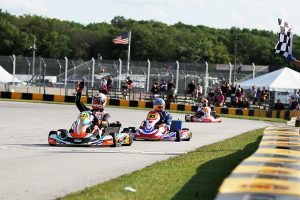 Scott Kopp was the lone driver to add to his 2020 USPKS total, coming out with the checkered flag in X30 Masters. Kopp (FMS / Exprit) set fast time in qualifying but was shuffled back early in the Prefinal, as former series champion Cristian Vomir (TecnoKart) drove to the win. Vomir jumped out to the lead in the 24-lap Final with the Kopp eventually putting himself into the lead challenger position. Kopp took the lead on lap 14, and held off challenges from Vomir and Scott Roberts (SCR / Redspeed) for his third straight victory of the season. Logan Cozzie (TimmyTech / CompKart) was fourth with Alex Mueller (CompKart) rounding out the top-five.

The third victory on the day for Will Power Kart came from Max Garcia. The KartSport North America driver put in a demanding performance on the day. After securing fast time in qualifying by over three tenths of a second, Garcia led all 14 laps of the Prefinal. Max jumped out to a solid lead early in the 20-lap Final, leading every lap for his first victory of the season, becoming the third different winner on the year. The fight was for second with Parker DeLong (Nitro Kart) beating Cameron Brinkman (FMS / Merlin) and Ben Maier (Nitro Kart) to the line. Championship leader Matias Orjuela (Parolin) drove up six spots to fifth. 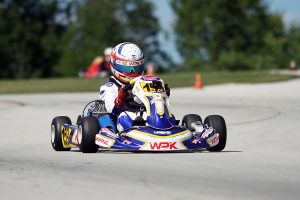 Micro Swift was a battle of the Badgers. Plymouth, just a few miles south of Road America, is the hometown of Brady Schad (Nitro Kart). Schad set the pace in qualifying and won the Prefinal. For the main event, he was joined at the front by fellow Wisconsin driver Cade Jaeger (Nitro Kart). Jaeger took over the lead on lap two, and led the remainder of the 20-lap race for his first USPKS victory. Schad settled for second with Vivek Kanthan (MDR / Kosmic) in third. Jase Petty (Kart Republic) was fourth with two-time winner Jack Iliffe (IRM / Tony Kart) rebounding from zero laps in qualifying to finish fifth on the day.

Sunday hosts Round Four of the 2020 United States Pro Kart Series with the Badger State Grand Prix looking at a threat of rain for the final day of action. Wet weather could play a major factor on who rises to the top as we begin the second half of the championship chase.