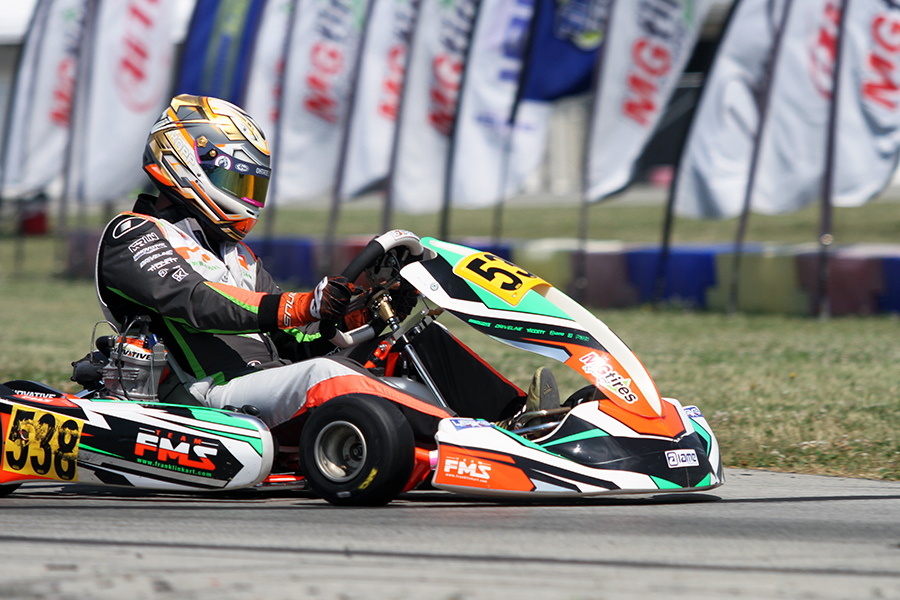 Scott Kopp drove to victory in X30 Masters, conquering both the dry and the wet at the USPKS opener (Photo: EKN)

The month of July was the first time EKN was trackside for a karting event since the COVID-19 pandemic began in March. It was a long hiatus from the smells of race fuel in the morning, and joy of watching drivers hoist the trophies in the air in celebration at the end of the day. The July 17-19 weekend was the official start to the 2020 United States Pro Kart Series in what was originally scheduled as the series finale. Nearly 220 entries gathered at the New Castle Motorsports Park in New Castle, Indiana for the opening two rounds of the championship chase.

The X30 Masters class made its return to the program in 2018 and saw a stellar roster of 19 drivers competing at the 2020 opener. Among them was Franklin Motorsports driver Scott Kopp. During the winter break, Kopp helped to merge the Innovative Performance operation in-house with Franklin, thus creating the Innovative Engine Works by FMS. Kopp has been working alongside FMS owners George and Jamie Sieracki since the beginning of December 2019. Kopp finished third in the USPKS standings, earning his first series victory at GoPro in 2019. He was joined at New Castle by defending series champion David Galownia and series vice-champion Scott Roberts.

The returning trio were in the hunt all weekend long. Roberts struck first, securing fast time in qualifying before he edged out Kopp at the line for the Prefinal by four thousandths of a second. They ran 1-2-3 in both the Prefinal and Final, together throughout the 16-lap Final. Roberts led the way with Galownia and Kopp fighting early in the main event. Kopp eventually took the top challenger position and put the pressure on Roberts. Multiple times, Roberts shut the door on pass attempts made by Kopp. On the final circuit, Kopp made his move at the ‘Green Corner’ and was able to escape with the lead. Roberta and Galownia fought for the second spot, allowing Kopp to cross the line unchallenged for the victory.

The second round saw Galownia out front with quick time in qualifying and driving away to a four-second advantage in the Prefinal. The Final was a bit unique, as the skies opened just as the drivers hit the track, making it wet for about one full lap. Several competitors made contact in the ‘Scoreboard’ and I-70 corners, while Galownia jumped away in the challenging conditions. Officials threw a red flag for the rain weather and nearly half the field involved in wrecks. By the time the race resumed, the precipitation increased heavily. The field returned to a soaked race track, and Kopp took advantage of the restart. Kopp moved to the lead ahead of Galownia. They ran 1-2 with Kopp keeping enough distance between himself and Galownia to control the shortened 10-lap race. Kopp won his second on the weekend, third of his career to leave the Hoosier State Grand Prix as the championship leader.

Kopp leads the championship standings by 60 points over Galownia with Roberts 90 points out of first. The trio, along with the talented roster of drivers, will go back to battle at the upcoming Badger State Grand Prix at the CTECH Manufacturing Motorplex at Road America. The event will take place over Labor Day weekend – September 4-6 – in Elkhart Lake, Wisconsin. EKN will have full Trackside Live coverage of the third and fourth round of the championship series. 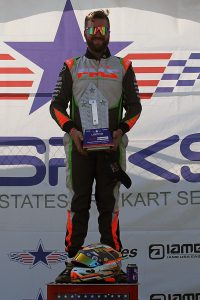 Chassis: Exprit
Engine/Engine Builder: X30 and KA100 / Innovative Engine Works by FMS
Sponsors: Franklin Motorsports, Innovative Engine Works
Series You Compete In: United States Pro Kart Series, Route 66 Sprint Series
Years Karting:17
How did you get started in karting? When I was 13 my dad asked my brother and I if we wanted to race Jr. Dragsters, karts, or get a boat. The answer was clearly karts
What has been the high point in your racing career? First USPKS victory at GoPro Motorplex in 2019.
What are your goals in racing? Just out to have fun
In a few words, how would you describe your driving style? No nonsense
Funniest moment at the race track? Too many to choose from

What do you do when not at the track? Work and spend time with friends
What are your goals outside of karting? Make a comfortable living and have fun doing it
What type of street car do you drive? 2011 Mitsubishi Lancer Evolution X
What type of street car would you like to drive? A Ferrari would be cool
What are your pet peeves or things that irritate you? Loud chewing
What do you think could be done to improve the sport of karting? Not so many engine and tire options
What are your favorite aspects about the sport of karting? The people that you meet and the friends that you make