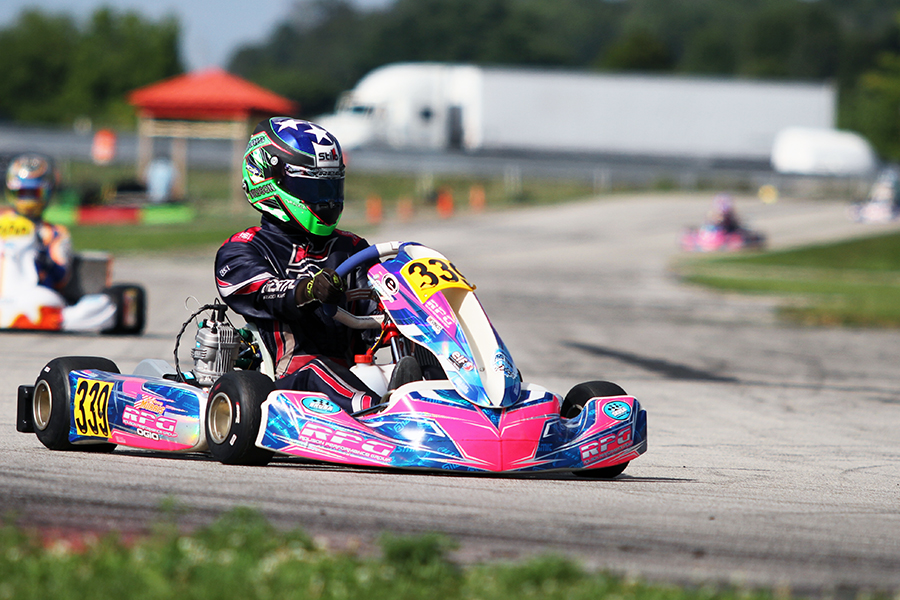 Bryson Morris locked up a total of six wins in the X30 Senior and KA100 Senior categories to earn both series championships (Photo: eKartingNews.com)

The Rolison Performance Group completed its extended stay in New Castle, Indiana on the August 13-16 weekend as the Superkarts! USA Pro Tour wrapped up its two-weekend, six-round SummerNationals program. The final weekend at the New Castle Motorsports Park hosted the last three rounds of the championship series and RPG was front and center, fielding entries in shifterkart, X30 and KA100 competition. RPG’s in-house AVP engine program partnered with the OTK products of Kosmic and Tony Kart and they both contended for race wins and ended with strong results in the championship chases.

Bryson Morris had a breakout weekend to open the double-header in both X30 Senior and KA100 Senior. The driver from Tennessee followed this by recording two top-five finishes in Round Four to help solidify his position as the championship leader in both categories. Round Five was the exclamation point, as Morris drove to a third victory in each class. Morris advanced six positions in the KA100 Senior final to secure the victory and lock up the championship in the penultimate round. He then ended the day driving from fifth to first in the X30 Senior main event to earn his third victory, locking up that title one round early as well. Morris gave RPG a sweep of the KA100 Senior division and the X30 Senior championships for 2020, including both the SKUSA Winter Series and the SKUSA Pro Tour. 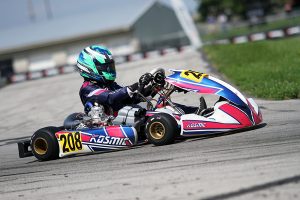 Josh Pierson added to his Pro Shifter 2 debut with a victory in the second weekend, earning the vice-champion position in the standings (Photo: eKartingNews.com)

Four-time SKUSA Pro Tour X30 Senior champion Ryan Norberg came up just short of defending his title over the two grueling weekends. Norberg recorded three third-place results, and placed inside the top-10 two more times in the six rounds of competition. A penalty in Round Six knocked him out of a sixth straight top-10 result. In the end, Norberg finished fifth in the final championship standings. In total, RPG recorded three victories, six podium results, three Prefinal victories and two top qualifier honors at the hands of Morris, Norberg, and Hannah Greenemeier. The second weekend saw three top-10 results from Greenemeier in her RPG / Kosmic entry.

The pairing of Morris and SKUSA Winter Series champion Nate Cicero delivered RPG and Kosmic four victories in KA100 Senior over the six rounds of the SKUSA Pro Tour. Cicero was able to secure the victory in Round Four, advancing from seventh to first while posting the fast laps of the race. Nate added another top-five result in Round Six, advancing 12 positions to fourth in the last main event of the program. Cicero ended up fifth in the final championship standings for his first Pro Tour campaign.

Coming off his first career victory in the Pro Shifter 2 division in Round 3, Josh Pierson added to his resume in his Senior debut. The SKUSA #3 plate holder from X30 Junior made the transition to shifterkarts quickly, and he was among the quickest drivers in the race group all weekend. Pierson had two top qualifier honors, a Prefinal win and a main event triumph over the three rounds. In total, Pierson stood on the podium four times with two wins, a runner-up result and a third-place finish to earn the vice-champion position in the standings. 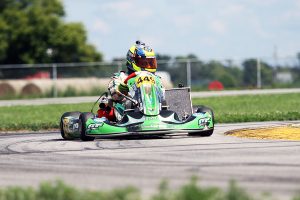 Justin Peck helped to add to the win total for RPG at the SKUSA Pro Tour. Peck was able to secure victory in Round Five in the G2 category. Piloting a RPG / MSquared Tony Kart, Peck continued to improve throughout the two weekends, earning his first career SKUSA Pro Tour victory. Peck racked up the one win and five podium finishes, including four runner-up results to finish as the vice-champion in the final standings.

The double-header format was a challenge in defending the Pro Shifter title for RPG driver Kyle Wick. The driver from the state of Washington kept himself in position to challenge for a repeat in the championship. A poor result in Round Four was met with a bounce back in Round Five. Wick took advantage of the right opportunities to drive his way up to the third step of the podium for his first trip to the steps. A string of top-five finishes in Round Six kept Wick from defending the title, as he ended up sixth in the final standings.

“This was a unique and challenging situation our team and the entire paddock was faced with contesting the entire championship program in two weekends,” stated RPG team principle Mike Rolison. “Our entire crew, drivers and their families put in a 100% effort over the nearly 16 days spent in Indiana and I can’t thank everyone enough for continued support. While we hoped to leave with more hardware, overall, we had numerous drivers in the hunt throughout the program in multiple categories. Our rookie and second year drivers in the X30 Senior class fought within the top-10 to position multiple RPG drivers in the hunt throughout the event. Branyon Tiner had quick time in multiple sessions while Jonathan Portz and Aaron Benoit improved pace during the course of the weekend. The emergence of Bryce in X30 and KA, along with the growth of Josh and Justin in shifterkart, shows the great development under our tent. We’ll continue to push forward as the 2020 season moves on.”

The next stop for the Rolison Performance Group race team is over the Labor Day weekend as the hauler travels to Road America for the second event of the United States Pro Kart Series. Rounds Three and Four will be contested on September 4-6 at the CTECH Manufacturing Motorplex which is located inside the famous Elkhart Lake, Wisconsin facility.