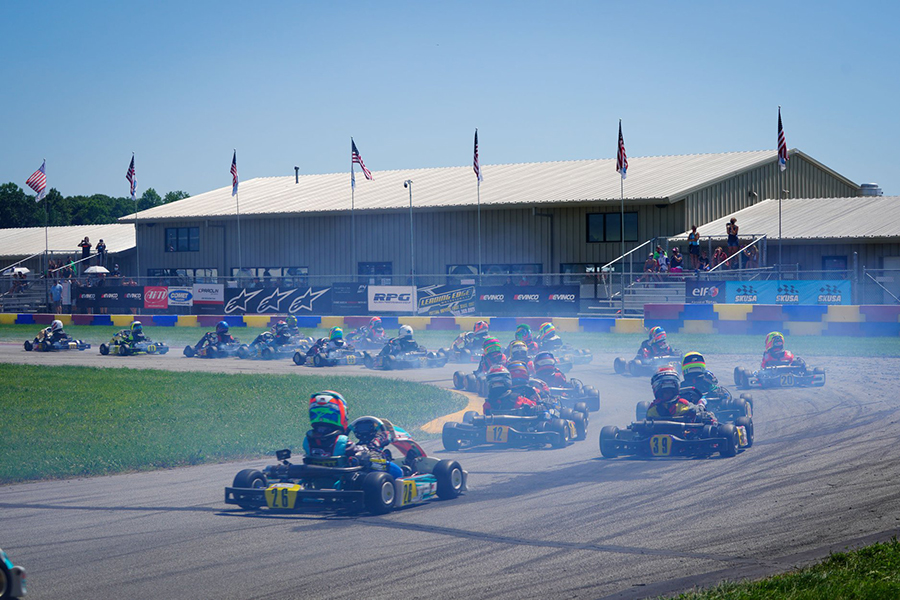 It has been over a year since I last wrote a column surrounding a race weekend. During the early days of the COVID-19 pandemic, that was all I did every week. Now that racing, especially karting, is back strong, it’s great to write, photograph, and just enjoy the action that is kart racing. The last two weekends trackside were a ‘Costco-sized’ package of karting with the 2020 Superkarts! USA Pro Tour all wrapped up into a 10-day marathon. Over 200 competitors called the New Castle Motorsports Park home during the mid-August event, grinding away at six rounds of racing to decide the 12 different SKUSA Pro Tour champions of the year.

This was unlike any other karting event we had seen or been to. SKUSA packed up the cancelled WinterNationals in New Orleans, the cancelled SpringNationals in Utah and put them together with the SummerNationals in New Castle to make it a ‘Summer Festival’. Each of the two weekends of racing included three rounds of competition. It was a grind for all involved; the SKUSA staff, the NCMP staff, the competitors, the teams and the families of all those involved. As Dan Schlosser put it, each day felt like waking up in the movie ‘Groundhog Day’. 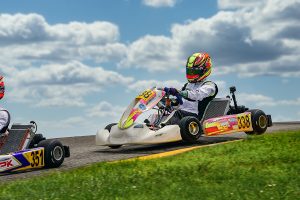 The ‘Ski Jump’ of the ‘Super Mile’ course provided some excitement over the opening weekend (Photo: OnTrack Promotions – otp.ca)

Three rounds of racing were contested on the opening weekend featuring the ‘Super Mile’ course with the final three rounds held the second weekend taking to the ‘Reverse National’. SKUSA had previously utilized the ‘Super Mile’ layout at the 2019 SummerNationals. The course receives mixed reviews, but the ‘Ski Jump’ section reminds you of the famous ‘Corkscrew’ at Laguna Seca. I myself was looking forward to the ‘Reverse National’ weekend, as it gave us something new. With every event EKN has covered at NCMP, the layout has always been in the counterclockwise direction, no matter the configuration. Now, moving back to the traditional NCMP finish line when the track was opened in 2004 and going the opposite way, this provided a new route for the final few corners. It wasn’t the draft until the I-70 and then drag race to the line. This put more of an emphasis on race craft, and where you should make your move to be able to hold on through the final corners. We saw a few classes that were decided in the last three turns in Rounds Four, Five and Six.

Three rounds of racing per weekend was the new format for the double header. Three separate rounds of racing back-to-back-to-back tested the drivers, teams, staff and equipment. On the equipment side, engines seemed to be put to the test with tech diving through the engines in the top-five each night, and the engine builders did their job to ensure there were not major engine failures. Utilizing the ‘Super-Mile’ course first, the ski jump tested the chassis out of the gate, and from our viewpoint, there were no major issues with chassis damage outside of typical incident damage. While the triple-round weekend provided maximum racing, it pushed us humans. I think if you were to poll the competitors, no one would be on board for three rounds of racing in one weekend. 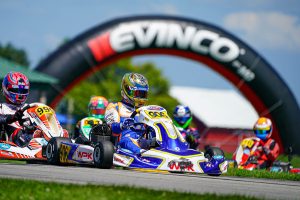 One factor throughout the two weekends that was different was the tires. SKUSA continues to utilize the Evinco brand, however, the new Red ‘SK-M’ and the Blue ‘SK-H’ compounds made their debuts. These tires have been updated for the tire homologation period for 2020 and, as we witnessed, brought on a new challenge of drivers and teams adjusting to the performance of the tire. At each of the past SummerNationals at New Castle, the buildup of rubber on the track surface was common, especially with the number of shifterkarts on the track each year. You would walk the track and certain sections wanted to rip your shoe off your foot. This year, there was not the significant buildup at the corners, despite six rounds of racing in two weekends. The new tire seems to marble up more than laying down the rubber to the surface, yet it still provided similar lap times to what we saw a year ago. On the ‘Super Mile’ course, the third round qualifying session for the shifterkarts in 2020 was about two tenths off the fast time set in 2019. The common thread for the single-speed categories were drivers putting in mechanical grip to achieve the optimal lap time.

One aspect I loved was how tire strategy was utilized in the categories on the Blue ‘SK-H’ compound. For the three rounds, drivers received just two sets of tires to use at their discretion. Of course, the opening round was used on the same set. Come Round Two, and drivers began looking at different strategies. For example, Jace Park in X30 Junior waited until the Final in Round Three before slapping on his second set of tires. Park went on to win that main event. Others used it right away in Round Two or waited until the second main event, and some even for Round Three qualifying. Up and down the grid, drivers and teams used different approaches to take a shot at the front. I think it helped to break up the cookie-cutter feel of the event with everyone on the same strategy that we have for two-round weekends. Looking forward, maybe we need to add two new tires to the weekend for the harder compound categories. Similar to what we saw back in the old ProMoto Tour days when they were given six tires to use for the entire weekend. 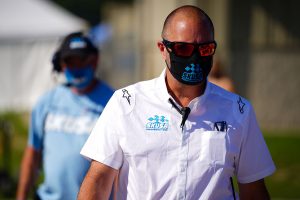 Another change was the race director, or now race directors – plural. In May, SKUSA announced the addition of Beaux Barfield and John Maesky as the SKUSA Race Directors. With the two new personalities at the helm, they bring in a different viewpoint. With the social distancing in place, the drivers meeting was held virtually with SKUSA producing a video for all competitors to watch. Our position at the track was not near the officials, and thus, it was hard for us to gauge what penalties were being called and how different situations were dealt with. Of course, during our day-end paddock walks, we heard the negative of no calls or wrong calls. Because let’s face it, when was the last time you heard someone compliment a call made by a race director? It was also a wild adjustment for the competitors on how they interpreted the rules of racing in a two-weekend time period. It is tough to judge the courtship of the new race directors and the racers under the SKUSA banner in such a unique situation that was the Summer Festival. For now, we will have to wait for future events to really get a full picture.

Being back at the racetrack with SKUSA was great, having dealt with the early days of the COVID-19 pandemic in New Orleans back in March as the 2020 season attempted to get off the ground. The past five months have been a unique situation and change to our everyday lives. Living in the state of Michigan, wearing a mask was instituted early on for the pandemic. Either they sit with my keys or a spare in the car, just to be sure we as a family are ready. As we have seen with professional sports and racing, masks worn around the playing field or paddock has become the mandate. Superkarts! USA sent out a notice to everyone before the event began that masks were going to be required. Anywhere outside of your pit area, a mask was mandatory. I found it disturbing that there was a percentage of those in attendance that could not adhere to this rule. Multiple times looking at the grandstands and walking through the paddock during the event hours, people were without a mask or not wearing it properly. This even triggered a shutdown period where SKUSA halted on-track activities until people began taking the mask wearing more seriously. Thankfully, there were no more shutdowns and the event was completed. 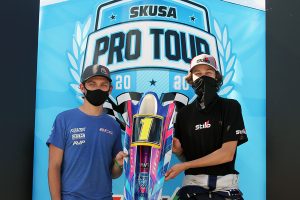 Congratulations go out to the 12 class champions, including two drivers who were able to earn double titles. This was the first time in SKUSA Pro Tour history that a driver has won more than one championship in the same year – with Bryson Morris (X30 Senior / KA100 Senior) and Carson Morgan (X30 Junior / KA100 Junior) making history with their titles. Morgan also added his name to the list of four-time SKUSA champions Ryan Norberg and Jordon Musser, adding to his back-to-back titles in 2017-2018. AJ Myers (Pro Shifter) made history as the second driver to earn a second title in the headline shifterkart division, joining Fritz Leesmann as the only other driver to do so. Nitro Kart owner Nick Tucker earned his second SKUSA title, becoming the inaugural champion in the new KA100 Master class. Tucker was the 2015 TaG Master champion, becoming one of the few to earn a title in multiple classes. Texan Jack Iliffe became the first driver in the five-year history of the Micro Swift class to repeat as champion. The other five drivers – Vicente Salas (Pro Shifter 2), Scott Barnes (G1), Nathan Stewart (G2), Parker DeLong (Mini Swift) and Scott Roberts (X30 Master) all enjoyed the celebration of a first SKUSA championship.

Now, the attention turns to the 2021 season for the Superkarts! USA Pro Tour for what will be the 12th season for the program. From now until the calendar turns over, there are still unknowns as to where the country and the world will be with the COVID-19 pandemic. All we can hope is that the traditional WinterNationals, SpringNationals and SummerNationals take place and we are back to what we know as normal in the karting community.