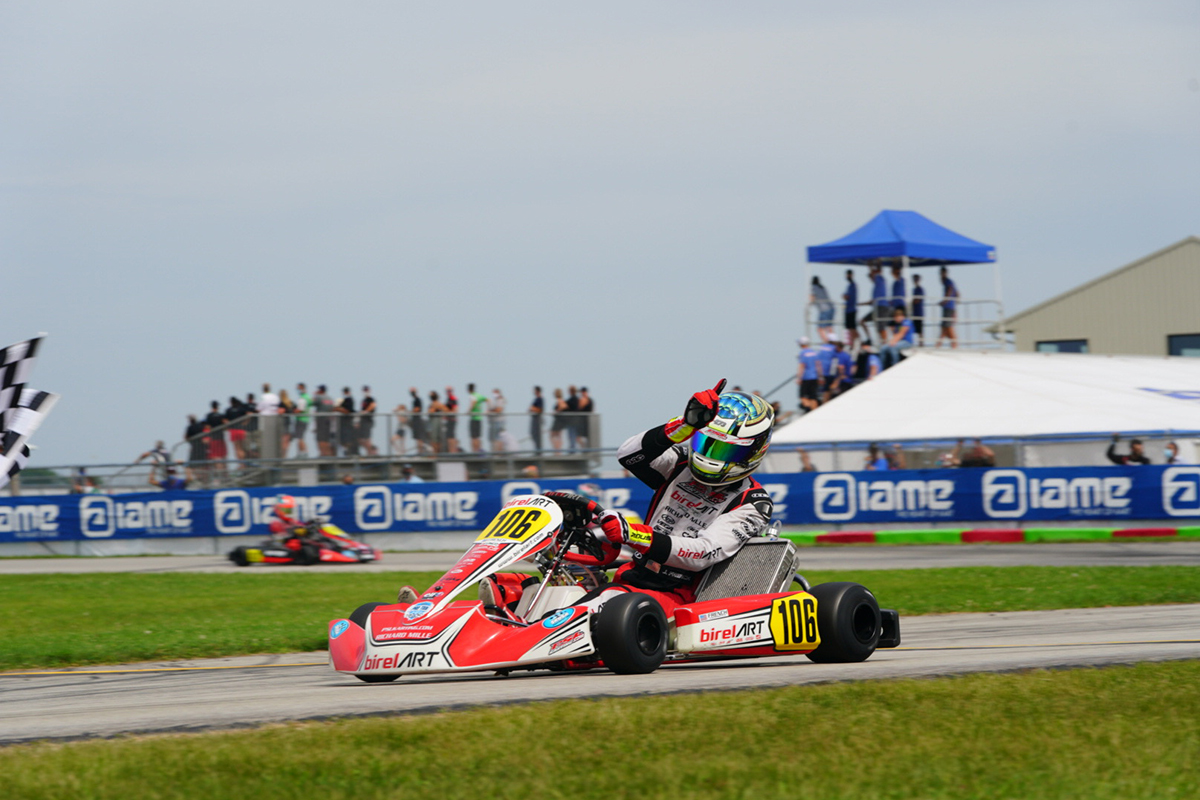 Flexing their muscles in the gearbox divisions, Birel ART North America picked up seven victories at the two weekend, six round series of the Superkarts! USA (SKUSA) Pro Tour. Leading the way with five main event victories was Nathan Stewart while Jordan Musser and Jake French each nabbed one win each to help the multi-dealer race team achieve success.

“It was a long two weeks for our guys in Indiana, but it was worth it in the end,” explained Dominic Labrecque. “To bring home seventeen podiums in one of the toughest fields in all of karting is a pretty big accomplishment. A huge thanks to our crew, drivers, mechanics and families for all the help and support.”

With Nathan Stewart dominating the G2 class, the Birel ART driver took home six pole positions over the six races and five main event victories with his only falter being round five last Saturday where he posted a disappointing DNF. Almost sweeping the complete series, Stewart has been on a tear in 2020 taking the top step of the podium in several different series.

The duo of Jake French and Daniel Formal garnered six podium results between the two of them with French getting the upper hand courtesy of his round four victory. After second and third place results to open the SKUSA Pro Tour, French had a disappointing DNF in round three but returned the following weekend to stand atop the podium and add another win to his resume. Closing the Pro Tour with a pair of sixth place results, French will now shift his focus to upcoming events.

ANSA Karting and Charles LeClerc Kart driver Daniel Formal did not have the best start to his 2020 Pro Tour as he failed to finish the first main event of the year. Improving in rounds two through five, Formal went fourth, third, third and second on the results sheets claiming three podium finishes before closing his SKUSA Pro Tour season with a seventh-place effort.

The Pro2 Shifter would see three Birel ART North America drivers as Jordan Musser, Gavin Bayliff and Anthony Freese would all throw their hats into the mix. Musser ran a limited schedule, only competing in the first three rounds taking the round one pole position win and finishing fourth in round two. Freese secured three podium results and five top-five finishes over the two-week Pro Tour. Standing on the third step of the podium in rounds three, five and six, Freese added a fourth in round one and fifth place result in round two. Bayliff added to the BirelART North America podium total with third and second place finishes during the opening rounds of each weekend adding an additional pair of top-five results in rounds five and six.

Always a threat for race wins and podium results, Mini Swift competitor Caleb Gafrarar was consistently in the top five over the past two weeks. With a pair of pole positions in rounds five and six, Gafrarar’s finishing results were not indicative of his true speed at New Castle Motorsports Park. Finishing either fourth or sixth in all six main events, the North Carolina resident led laps and battled at the front of the field but racing luck would not be on his side.

A pair of Birel ART North America drivers would do battle in X30 Junior with Andres Perez de Lara and Logan Toke. In round two, Andres would qualify in the fifth position showing the speed of his Birel ART chassis and eventually claimed a seventh-place result in round three. Toke took his round four sixteenth place qualifying effort and turned that into an eighth-place result before qualifying an impressive third for round five.

X30 Senior driver and perennial front-runner Thomas Nepveu claimed a pair of pole positions in rounds three and six and also qualified in the top-six a total of four times in the talent filled class. Finishing sixth in round one, Nepveu’s next best finish came in round six with an eighth-place effort. Showing front of the field pace throughout the two weeks, Nepveu happened to be in the wrong place at the wrong time in almost every main event.

Labrecque added, “Again, we need to send a big shoutout to all of our dealers for continuing to push the Birel ART product line. We have a great product and great drivers and that is being proven by our consistent success.”

For more information to become part of the BirelART, Ricciardo or Charles Leclerc dealer networks or information on how to join the PSL Karting Race Team for the 2020 season, please contact Dominic@PSLKarting.com.