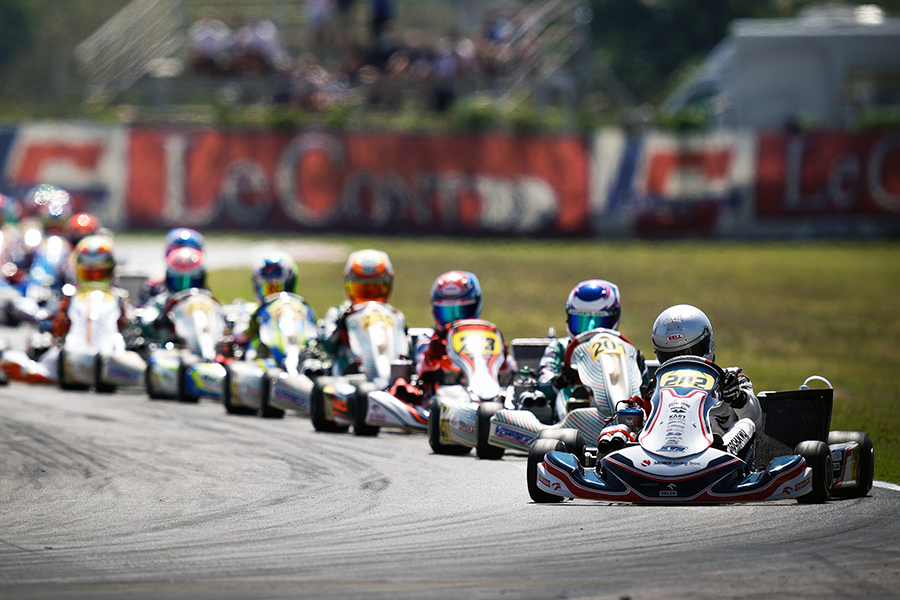 In line with the previous phases, the Finals of the FIA Karting European Championship – OK & Junior were hotly contested in Sarno, but the favourites won indisputably after some spectacular races. After a faultless race from start to finish, Britain’s Taylor Barnard won in the OK class, while Ugo Ugochukwu of the United States won in the Junior class.

The weather remained beautiful and very hot throughout the Neapolitan weekend, putting Drivers and equipment to the test. The last Qualifying Heats on Sunday morning were as competitive as the day before, and some of the Drivers still had some hopes. The two Finals were not to be outdone either, with several significant incidents. However, the two winners of Sarno were undoubtedly the strongest. Taylor Barnard moved back to the top of the provisional standings of the FIA Karting European Championship – OK after dislodging Andrea Kimi Antonelli, while Ugo Ugochukwu went from 4th to 1st place in the FIA Karting European Championship – Junior.

Grand Slam for Barnard in OK

From the beginning of the Final, Weug, Janker and Harry Thompson (GBR – Exprit/TM Racing/LeCont) retired on the first lap. Barnard was ahead of Joe Turney (GBR – Tony Kart/Vortex/LeCont) and Juho Valtanen (FIN – KR/Iame/LeCont), but Andrea Kimi Antonelli (ITA – KR/Iame/LeCont) came back very strongly. Barnard had had time to build up a lead of almost two seconds by the time Antonelli took 2nd on lap 7. The chase was on. Barnard maintained a very fast pace and Antonelli had to face the fact that victory was going to be very difficult to achieve. Even though Barnard slowed down slightly at the end of the race, it did not prevent him from winning the feature with a 9 tenths lead over his rival. Turney finished 3rd, Nikita Bedrin (RUS – Tony Kart/Vortex/LeCont) was 4th, while Camara managed to regain 10 places in 5th.

“I’m very satisfied with my performance in Sarno,” said the Rosberg Racing Academy Driver. “The equipment was excellent, the team was perfect. I have to admit that my engine showed some signs of wear in the final laps of the Final. I had to relax a little bit until I crossed the finish line with relief.”

Good work for Ugochukwu in Junior

Even though he took the lead in the Qualifying Heats of the FIA Karting European Championship – Junior on the Sarno circuit, Ugo Ugochukwu (USA – KR/Iame/LeCont) did not have an easy time of it against the poleman Maxwell Dodds (GBR – Parolin/TM Racing/LeCont), as well as Tuuka Taponen (FIN – Tony Kart/Vortex/LeCont), Arvid Lindblad (GBR – KR/Iame/LeCont) and Tymoteusz Kucharczyk (RK/TM Racing/LeCont).

Ugochukwu kept the advantage at the start of the Final and gradually broke away from Taponen. Delayed at the start, Dodds did his best to come back, but it was Lindblad who made the most progress. He reached 2nd with three laps to go. The end of the race was intense behind the leader but Ugochukwu won by more than six seconds. Freddie Slater (GBR – Kosmic/Vortex/LeCont) took advantage of the fight in the leading group to grab 2nd place over Lindblad while Taponen finished only 4th. Karol Paciewicz (POL – Tony Kart/Vortex/LeCont) moved up from 15th to 5th place.

“I’m very happy to have had such a great weekend for my first Sauber Racing Kart race,” said Ugo Ugochukwu. “The equipment was exceptional thanks to the work of the team and the engine manufacturer. I tried to get an early lead in the Final and it worked. I scored as many points as possible and I’m now leading the Championship. I couldn’t have asked for more!”

The next Competition of the 2020 FIA Karting European Championship – OK & Junior will take place from 11th to 13th September in Wackersdorf (DEU).

Full results are available on fiakarting.com.