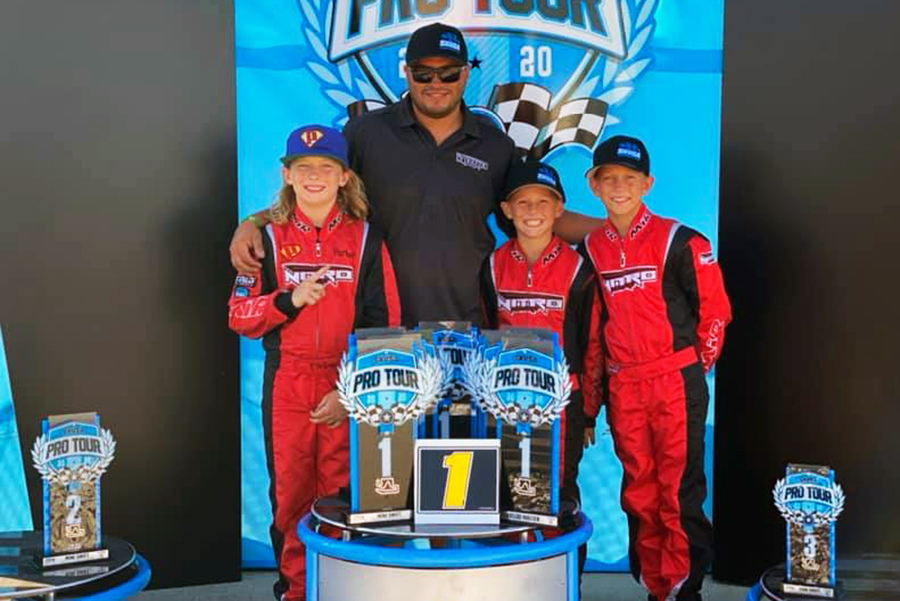 Team Nitro Kart took on the challenging Superkarts! USA Pro Tour at the New Castle Motorsports Park and left with great success. The six-round championship program was condensed into two weekends at the New Castle, Indiana facility. After 10 days and hundreds of miles around each of the two circuits utilized during the event, Team Nitro Kart came out with several victories and two championship to conclude the 2020 program. 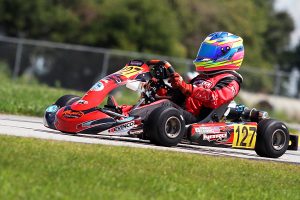 The star in the Mini Swift category all weekend was Team Nitro Kart’s Parker DeLong. The Arizona driver began the six-round marathon with victory in Round One, edging out the competition by 20 thousandths of a second. Round Two was a similar photo finish, this time with DeLong ending up second. Parker was the final straight away from winning Round Three when a group drivers drafted past to push him back to fifth by the checkered flag. DeLong mastered the ‘Reverse National’ layout in the second weekend, earning victory in all three rounds to claim the SKUSA Pro Tour championship.

Team Nitro Kart owner Nick Tucker sported the helmet and race suit in addition to managing the team over the two weeks. Tucker took part in the inaugural season for the KA100 Master class at the SKUSA Pro Tour. Victories in the first two rounds on the ‘Super Mile’ course set the stage for a run at the championship. A flat tire in the main event for Round Three put Tucker on the sideline. Wins in Round Four and Round Five locked up the championship prior to the final round. The championship marks the second in his SKUSA Pro Tour career, winning the TaG Master title in 2015. 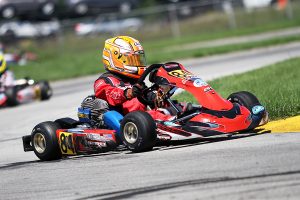 A ninth victory was earned under the Team Nitro Kart tent by Micro Swift driver Carson Weinberg. Through the opening three rounds, Weinberg stood on the podium twice with two third-place results. For Round Six, Weinberg found himself in 14th after the first lap of the Prefinal, down from qualifying top-five. He worked his way up to 11th and continued the charge in the Final. Fast laps of the race helped him to knife his way up to the top-five after six laps. From there, he managed to position himself in third. On the final lap, the two leaders made contact and Weinberg avoided the carnage to cross the line in first, earning his first SKUSA Pro Tour victory.

Adding to the hardware over the six rounds was Mini Swift driver Ben Maier. Over the opening five rounds, Maier was inside the top-10 twice, battling through a tough start to the event. Maier steadily found his grove on the final day, qualifying third. While he dropped back eighth in the Prefinal, Maier stayed out of trouble and quickly put himself into second. Maier took over the lead on lap 11 and was part of a trio breaking away from the field. Maier fought with Nitro Kart teammate DeLong for the top spot, coming up just short at the line to finish third, his first SKUSA podium in the category. 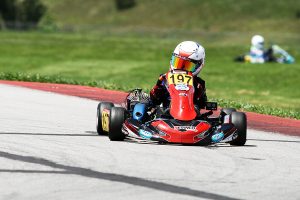 Ben Maier drove to his first SKUSA Pro Tour podium in the Mini Swift category in Round Six (Photo: eKartingNews.com)

“It was a solid two weeks of racing for us at New Castle,” stated Nitro Kart’s Nick Tucker. “We gained a lot of success and helped to develop a number of young drivers in the process. Coming off our Nitro Summer Camp really showed the progress drivers have made in this unique season. Nitro Kart was nearly half the Micro Swift field and Caleb Tarter came one corner away from winning his first main event. Thank you to the entire Nitro Kart crew, coaches and family for their support over the two weeks.”

Nitro Kart returns home to North Carolina to contest the GoPro Motorplex club race in Mooresville, North Carolina on August 22 before turning their attention to the United States Pro Kart Series event on September 4-6 at the Road America facility in Elkhart Lake, Wisconsin.

To find out how to be part of Team Nitro Kart or more about the chassis line, visit nitro-kart.com and make sure to follow them at Facebook and Instagram.