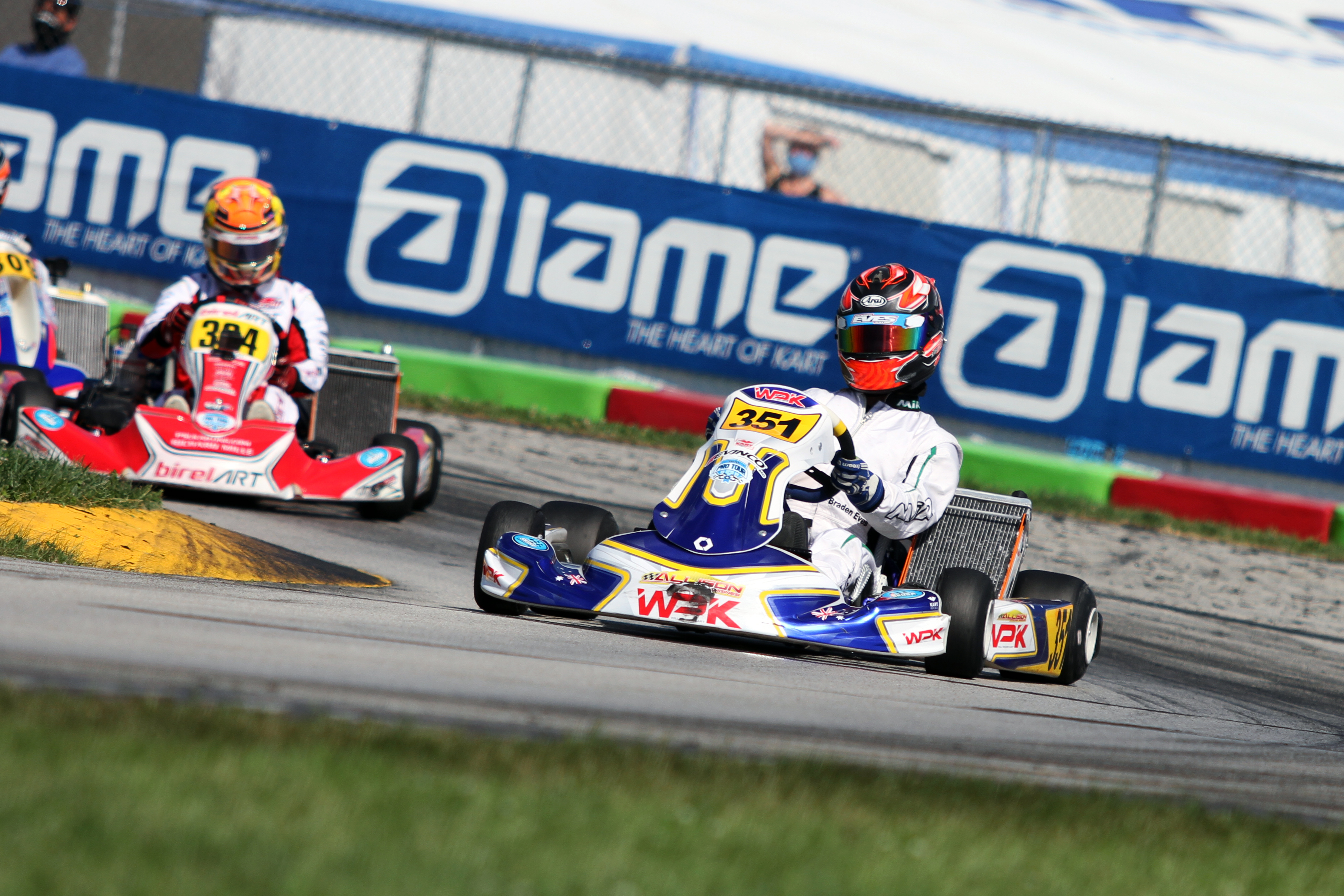 The unique and grueling grind of the 2020 Superkarts! USA Pro Tour ended on Sunday with the sixth and final round of competition contested at the New Castle Motorsports Park. The karting circus that began on August 6 in New Castle, Indiana came to a close with teams and competitors leaving during the evening hours. The day began with a humid overcast but northernly winds helped to push them away to sunny skies and much more comfortable temperatures then any of the previous rounds. On track, drivers left it all out on the track in hopes of moving themselves onto the championship podium, or to grab their best result of the 10-day marathon. 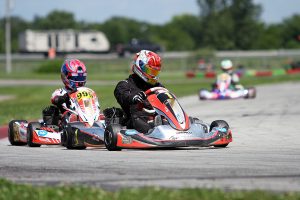 Victory for Austin Osborne in his final race with the #1 plate in KA100 Senior (Photo: EKN)

The compelling story in the X30 Senior and KA100 Senior classes was the absence of Bryson Morris. The Rolison Performance Group / Kosmic driver locked up both championships and elected to sit out the day to help mend sore ribs. He attempted the X30 Senior Prefinal, but only made it a few corners before pulling off. This allowed the attention to focus on the racing. It was a grueling fight in X30 Senior with some of the best in the country and returning veterans in the chase. Canadian Thomas Nepveu (PSL / Birel ART) set fast time in qualifying before four-time defending champion Ryan Norberg (RPG / Kosmic) had his best performance of the event to win the Prefinal. He along with Zach Holden (Trinity / Tony Kart), Brandon Jarsocrak (MDR / Kosmic), Arias Deukmedjian (KSNA / Kart Republic) and Nevpeu made up the lead group. Each driver wanted to lead and took a turn. Their racing back and forth allowed the second group to eventually close in. It was led by Braden Eves (KSNA / WPK), the provisional winner of Round Two only to have a pushback bumper penalty take the win away. Eves caught the group, worked his way into the middle and then up to the point with two laps remaining. Eves ran unchallenged to the checkered flag for the victory. Pauly Massimino (MDR / Kosmic), who started 10th, fought forward and was able to grab second with Deukmedjian third. Round Two winner Luca Mars (SCR / Redspeed) was up eight spots to fourth with Jake Drew (J3 / CompKart) improving 11 spots to fifth.

KA100 Senior saw a rare breakaway in the main event. 2019 SKUSA Pro Tour champion Austin Osborne (IRM / Tony Kart) used tire strategy to put himself at the front in the Prefinal with Luca Mars (SCR / Redspeed) second. The two locked up in the main event with Mars pushing Osborne away from the rest of the field. In the end, Osborne was able to hold off Mars at the line to end his reign as the SKUSA #1 with a victory. Matthew Mockabee (MDR / Tony Kart) ran solo in third as they fought for fourth behind him. SKUSA Winter Series champion Nathaniel Cicero (RPG / Kosmic) fought back from 16th to fourth with Garrett Adams (Comet / Kosmic) in fifth. 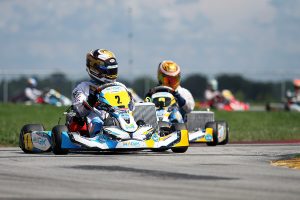 Magik Kart USA made a statement over the two weekends with their performance over the six rounds. AJ Myers (Magik) won Round Five and came into the finale with the championship lead. The 2017 SKUSA Pro Tour champion pulled off a similar performance to what he did that SummerNationals, sweeping the action to secure the championship. Myers led every session on the day, leading every lap on track to claim his second career championship, joining Fritz Leesmann as the only other driver to earn two titles in the headline shifterkart category. Behind him, Round One winner Andrew Bujdoso (Magik) ran unchallenged in second. The fight on track was for third with Rory van der Steur coming back from on incident in the Prefinal. Rory drove from 16th in the race group to third overall, giving Magik a sweep of the podium and of the championship podium. Myers returns as the #1 with van der Steur earning the SKUSA #2 plate and Bujdoso remaining as the SKUSA #3 holder. Four-time SKUSA SuperNationals winner Billy Musgrave had his best performance of the event with a fourth in his Factory Kart machine while 2019 title winner Kyle Wick (RPG / Tony Kart) ended his reign at the top with a fifth place finish.

Pro Shifter 2 rookie Vicente Salas (Factory Kart) was able to secure the series championship with victory in Round Six. Salas duplicated what Myers did, sweeping the finale while trailing the Pro Shifter drivers all day. Fellow rookie Josh Pierson (RPG / Kosmic) ran second all day, unable to match the speed of Salas to challenge for the win. They finished the championship 1-2. Anthony Freese (PSL / Birel ART) avoided any issues all day to run third with Gavin Bayliff (Trinity / Birel ART) fourth and Baylor Griffin (Orsolon / CRG) in fifth. Bayliff secured the third step of the championship podium. 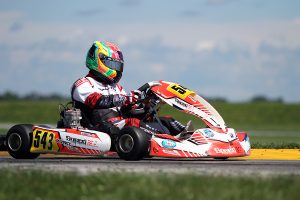 Joe Ruch (Race Factory) was able to bounce back from his flip on Friday and mechanical on Saturday to claim his third victory of the event in G1. Ruch had a DNF in the Prefinal due to a clutch issue, and was able to outrun Scott Barnes (HMG / Intrepid) for the victory. Barnes ran second, and secured the G1 title. Anthony Stiffler (HMG / CompKart) was third in the order. Nathan Stewart (PSL / Birel ART) earned a fifth victory in G2 to put the exclamation point on the championship. After recording a DNF on Saturday for a mechanical issues, Stewart fought off Justin Peck (RPG / Tony Kart) for the victory on Sunday. Ken Schilling (Aluminos) was third.

The five drivers in the X30 Master class put on a great show to wrap up the event. All five were in the lead group, exchanging the lead several times. Four time winner Scott Roberts (SCR / Redspeed) went into the Final with the provisional championship in hand. Roberts was able to take the lead on lap 11, and fend off late challenges by Adam Pettit (Solo Kart) for the victory. Ariel Castro (Birel ART) joined them on the podium with Miguel Mier (Crosslink / Exprit) fourth and Salvo Sparacio (Solo Kart) fifth. Contact on the opening lap broke up the KA100 Master field at the Cell Tower corner. Provisional champion Nick Tucker (Nitro / Tony Kart) and Ron Jenkins (Nash / EOS) got together, allowing Jonathan Silva (RPM / Tony Kart) slipping past for the lead. The advantage was too much for Jenkins to close back up, with Tucker pulling off track. Silva earned his second victory of the event. 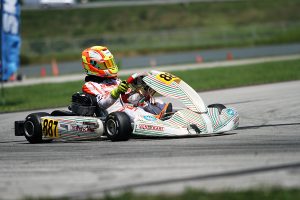 Two amazing performances on the final day by Carson Morgan gave him the win and title in KA100 Junior and X30 Junior (Photo: EKN)

The Junior categories provided some great drama throughout the day, with Carson Morgan as the star. Morgan (Tony Kart) went into the KA100 Junior main event needing to record fast lap of the race and win the race to edge out John Burke (Supertune / Tony Kart) for the title. That was after Burke was leading the Prefinal and has a right rear hub break, ending his race. Morgan went on to win the race and started the Final from the pole position. Morgan had a rare breakaway from the rest of the field and had the win in his control. What was not was who had the fast lap of the race. Burke was on a mission, starting 26th and knifing his way forward with fast laps of the race. It was an amazing drive that saw Burke into the second position by lap 13. The title was still his until lap 16 when Morgan put down a flyer, taking over the fast lap honor and 10 bonus points to swing his provisional title in his favor. Morgan went on to win by four seconds and earn the championship. Burke held on for second, coming seven points short of the title. Noah Baker (Supertune / Tony Kart) joined them on the podium in third with Christian Miles (KSNA / Kart Republic) fourth and Westin Workman (TimmyTech / CompKart) fifth.

Three drivers were in the hunt for the title in X30 Junior when the main event began. Alex Stanfield (Crosslink / Exprit), Brent Crews (KSNA / Kart Republic) and Carson Morgan (Tony Kart). All three were in the lead pack that include three other drivers – Max Opalski (RPM / Tony Kart), Paul Bocuse (SCR / Redspeed) and Logan Toke (PSL / Charles Leclerc). A lot of shuffling took place over the opening 10 laps until Morgan assumed the lead and Crews into second. That order gave Morgan a 40-point advantage. They would escape the rest of the field to run 1-2, Morgan earning his second victory on the day and the provisional championship. Crews settled for both second in the race and the title chase. Contact on the final lap involving Stanfield and Opalski took them out of the race, allowing Jack Jeffers (SCR / Redspeed) to grab the third step of the podium over Frankie Mossman (Nash / Tony Kart), who was hard charger of the race gaining 24 positions. Michael Costello (Benik / EOS) completed the top-five. 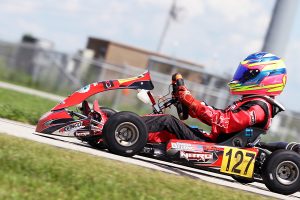 Parker DeLong capped off his championship performance with a fourth victory in Mini Swift (Photo: EKN)

Parker DeLong (Nitro Kart) put an exclamation point on his championship in the Mini Swift with a fourth victory on Sunday. Caleb Gafrarar (PSL / Birel ART) set the pace throughout the day, setting fast time in qualifying and winning the Prefinal. Gafrarar was leading the main event until lap 11 when Cooper Shipman (IRM / Tony Kart) and Max Garcia (KSNA / Kart Republic) made it three wide into the cell tower corner. Contact was made and all three went off the track. That allowed Ben Maier (Nitro Kart), Matias Orjuela (PPM / Parolin) and DeLong to slip through for the top-three spots. DeLong took over the point with two laps remaining, holding on to the checkered flag. Orjuela had fast lap of the race, finishing second with Maier in third. Shipman recovered to fourth with Spencer Conrad (Nitro Kart) fifth.

Micro Swift went down to the wire on-track and in the championship race. Isaac Malcuit (Comet / Kart Republic) and Caleb Tarter (Nitro Kart) were the driver fighting at the front in the Final for the victory while defending champion Jack Iliffe (IRM / Tony Kart), Asher Ochstein (Benik) and Vivek Kanthan (MDR / Kosmic) in the hunt for the title. Malcuit led the first 14 laps of the 15-lap main event. Tarter made his move at penultimate turn 13 left hander, diving inside of Malcuit. The two made contact and went off the track, into the barrier. This allowed Carson Weinberg (Nitro Kart), who started 11th, to slip through from third to first, claiming his first win of the event. Augustus Toniolo (CRG) ended up second with Iliffe in third. Ochstein, who was third early, slipped back to fifth behind Alessandro Truchot (Parolin) with Kanthan able to climb from last to sixth. Those results gave Iliffe a second-straight championship with Ochstein second and Kanthan third.

The marathon of the 2020 SKUSA Pro Tour is complete, and in the books. With the COVID-19 pandemic, it was a challenge to fit six rounds of racing within 10 days of competition. Team and competitors, along with the SKUSA staff, took on the task and completed it. The focus now turns to what the 2021 season will bring and what the status of the world and the United States will be when the calendar turns over to present the 12th season of the championship.